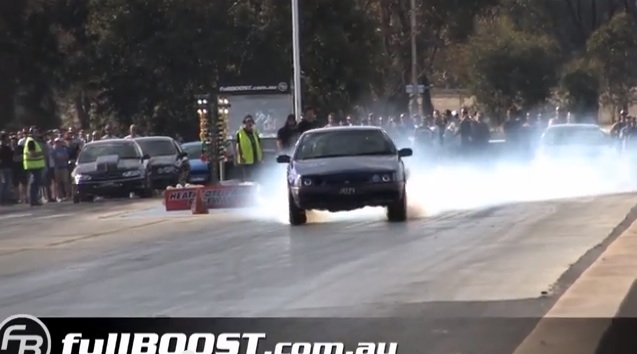 Australians do not play around with their drag racing. Between superchargers, turbochargers and enough nitrous to sedate a great white shark on a bloodlust, it doesn’t matter what vehicle they start with, when they wheel it onto the track it’s something to be very, very concerned about. And there is never, ever a shortage of horsepower available. The Tunnel Vision King of the Streets shootout at Heathcote Park Raceway brought out a ton of worthy rides, including the usual suspects from Ford and Holden, as well as one very nasty Valiant Charger and various others. Pedaling cars almost seemed to be the normal as the cars ran throughout the day until the evening, at which point the race turned into a “Chicago shootout” with a twin-turbo Holden Torana taking the final round against a single-turbo Hemi 6 Valiant.

Does A Car Reflect A Personality Or A Culture? In The Case Of This Black Dart, It Does Both Watch A Boeing 757's Jet Blast Catch And Fold Up This Hatchback's Rear Gate Like It's Made Of Paper

One thought on “The Tunnel Vision King Of The Streets Event At Heathcote Park Raceway – KOTS Racing, Australian-Style!”