Great Read: This 1981 Profile Of Mickey Thompson Is Informative, Wacky, Raw, and Real 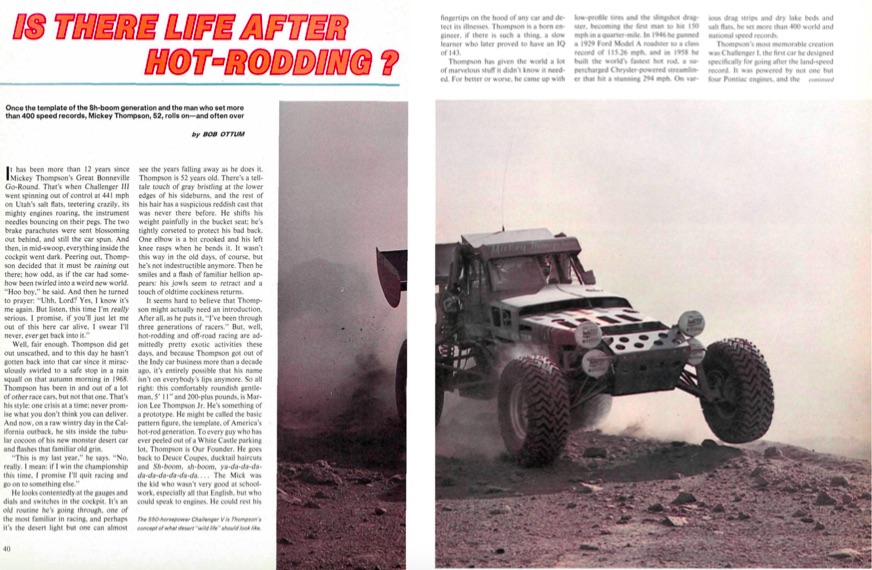 Just when you think you have read all the words that anyone has ever written about the late Mickey Thompson, you find perhaps the best thing ever penned about the man.

This is a 1981 Sports Illustrated story penned by the incredibly talented Bob Ottum, who passed away more than 20 years ago. The story is part Hunter S Thompson, part reverent look at an amazing American hero, and part unflinching profile on a guy who literally worked harder than basically anyone else in the history of hot rodding.

We can lionize Mickey Thompson easily after his death. The same can be said for many people who have accomplished great things. The real challenge is capturing someone like Thompson in all of his irascible greatness when he was still alive, especially in the period when this story was written, when the guy was kind of a lion in winter in terms of his own race driving career.

The way that Ottum captures Thompson here and the details shared. The money, the mirrored ceiling in his bedroom, and the devil-may-care attitude that not just permeated his early life but that defined it all the way to the tragic ending, this is just a magical piece of racing journalism. Read up, kids. This rules.

It has been more than 12 years since Mickey Thompson’s Great Bonneville Go-Round. That’s when Challenger III went spinning out of control at 441 mph on Utah’s salt fiats, teetering crazily, its mighty engines roaring, the instrument needles bouncing on their pegs. The two brake parachutes were sent blossoming out behind, and still the car spun. And then, in mid-swoop, everything inside the cockpit went dark. Peering out, Thompson decided that it must be raining out there; how odd, as if the car had somehow been twirled into a weird new world. “Hoo boy,” he said. And then he turned to prayer: “Uhh, Lord? Yes, I know it’s me again. But listen, this time I’m really serious. I promise, if you’ll just let me out of this here car alive, I swear I’ll never, ever get back into it.”

Well, fair enough. Thompson did get out unscathed, and to this day he hasn’t gotten back into that car since it miraculously swirled to a safe stop in a rain squall on that autumn morning in 1968. Thompson has been in and out of a lot of other race cars, but not that one. That’s his style: one crisis at a time; never promise what you don’t think you can deliver. And now, on a raw wintry day in the California outback, he sits inside the tubular cocoon of his new monster desert car and flashes that familiar old grin. 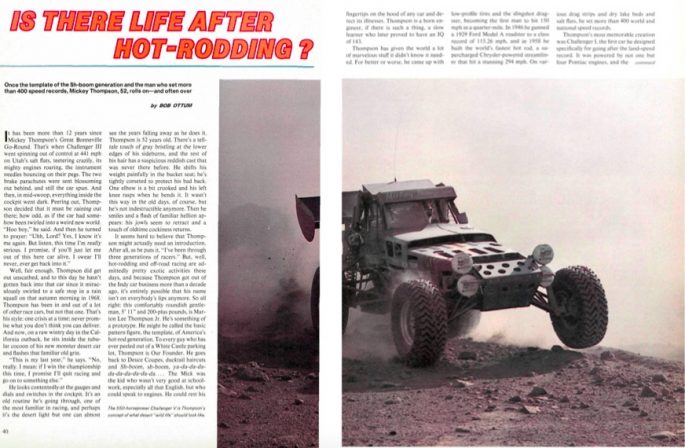 This 1992 Short Bed Is Sport Truck Heaven, And A Throwback To All That Was Right In The 1990s Engine Building Video: How Babbit Bearings Are Poured And Some Legit Tricks In How To Build A Model A Four Banger

One thought on “Great Read: This 1981 Profile Of Mickey Thompson Is Informative, Wacky, Raw, and Real”