This Blown SBC-powered BMW 3-series Is The Polar Opposite Of A Sleeper – Crude, Rude, And Unacceptable For Public Use. Perfect! 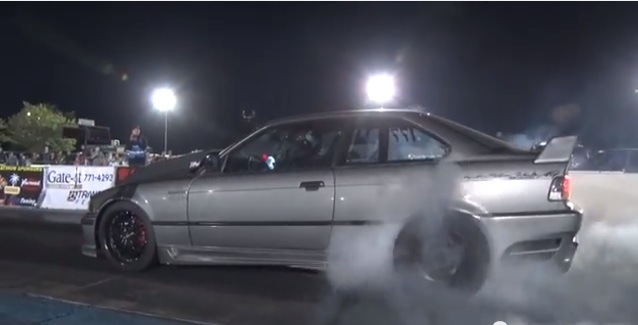 Sometimes you just don’t want a sleeper. It’s ok…sleepers are still awesome. It’s nice to hide tidal waves of torque in a package that looks like it might pull a high-17 second quarter. But there are those times were that just won’t do. You want something loud…not regular test-and-tune loud, but more like “middle fingers up” loud. You want brash. Visual overkill and audio assault. You want something that sounds like it’s going to tear your world in two, a car that will repave the road, spin a donut at the end of the road and rev at you, like “the hell are YOU gonna do about it?” And you want it to catch the crowd’s attention, regardless if they love it or hate it. And this BMW is that car. It’s not done, but it is close enough to wake up the better half of New Mexico. The blown 355ci small-block Chevy under the hood makes clear it’s intentions, and if it weren’t for the stock BMW rearend that is barely holding itself together, this would be one 3-series that you wouldn’t want to screw with. The “Cops don’t like this” stickers in the quarter glass are the perfect additions to this lovely little package of violence.

Watch The Most Violent, Flaming Diesel Engine Explosion We've Ever Seen - NEVER Stand Close To A Dyno Arrest Warrants Issued In The Charlie Buck Racing Engines Break-In - And There Is A Street Outlaws Connection!

4 thoughts on “This Blown SBC-powered BMW 3-series Is The Polar Opposite Of A Sleeper – Crude, Rude, And Unacceptable For Public Use. Perfect!”