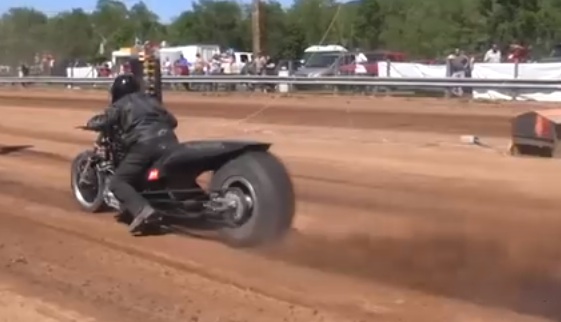 We like dirt bikes around here. We like drag bikes around here. But for the life of me, I can’t recall ever seeing a purpose-built dirt-track drag bike before…ever. These aren’t souped-up dirt bikes, but instead have more in common with a stretched-swingarm crotch rocket than anything else…which, of course, means that every ounce of action from the green light to the end of the track is on the fringe edge of control, with the rider not so much riding the bike, but wrestling it to the end. These things throw dirt just like a sand dragster, but with only one paddle tire or tractor tire on the back, you are left with a trenched patch of terra firma to run on. Hit play below and see just what I mean!

Watch The Crusher Camaro Battle Cones On The Goodguys Autocross Ebay Find: This Dusty 1939 Lincoln-Zephyr Is On That Fine Line Between Restore And Modify - What Would You Do?