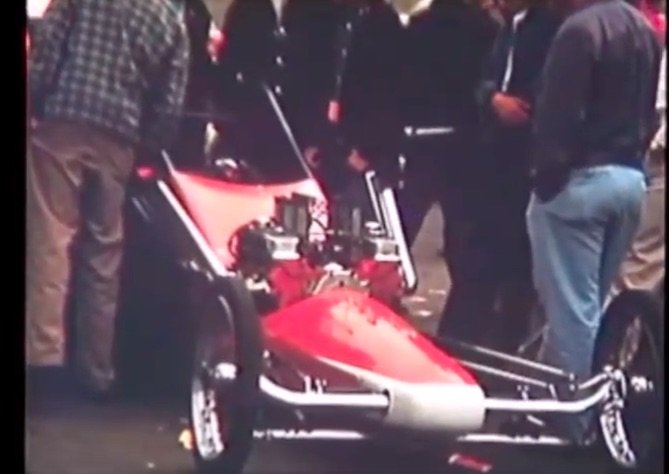 (Films from The Nakamura Brothers Collection Library) Now this is priceless! You are about to watch some amazing drag racing footage in the form of two short videos that show TV Tommy Ivo competing at Lions Drag Strip in the late 1950/very early 1960s with his first ever dragster. The car, built by Kent Fuller was powered by an injected Buick Nailhead and then blown version of the same engine. In injected trim the car was a killer, winning many local races as well as Top Gas at the first Bakersfield March Meet in 1959. It is short, it is sweet, and it’s a beautiful thing to look at with the exhaust pipes (early version of zoomies) angled up at the same rate of rise as the tubing of the dragster chassis.

Outside of seeing Ivo’s wonderful little dragster, there’s the scene at Lions itself. The place would grow over the years but the rather claustrophobic nature of its layout would be a hallmark of its existence all the way through the last drag race in 1972. The stands and tower are right on top of the track and the track itself isn’t even wide enough to allow a little dragster like Ivo’s much room to make the turn around after being pushed up the track!

One awesome fun fact to know and share here is that when you see the car being pushed up the track to get started, the car that is pushing the dragster is almost certainly being driven by a young guy no one had really ever heard of at that point, Don Prudhomme. Seriously. How amazing!

This car was the first to break into the 9s in drag racing, it ran over 154mph on its best injected runs and a load faster than that with the blower installed. Being able to see it like this is simply magical. Drag racing history come to life!

Big Red Video: This 1964 Film Tells the Story Of Ford's Futuristic, Turbine Powered, Roadworthy Big Rig Mini Pinzgauer 6x6 Build: A Cab Forward Side By Side UTV That Will Have Everyone Wanting One