Unhinged: Two Wild Hours At The 2015 ADD Dragtoberfest Diesel Drags At US 60 Dragway 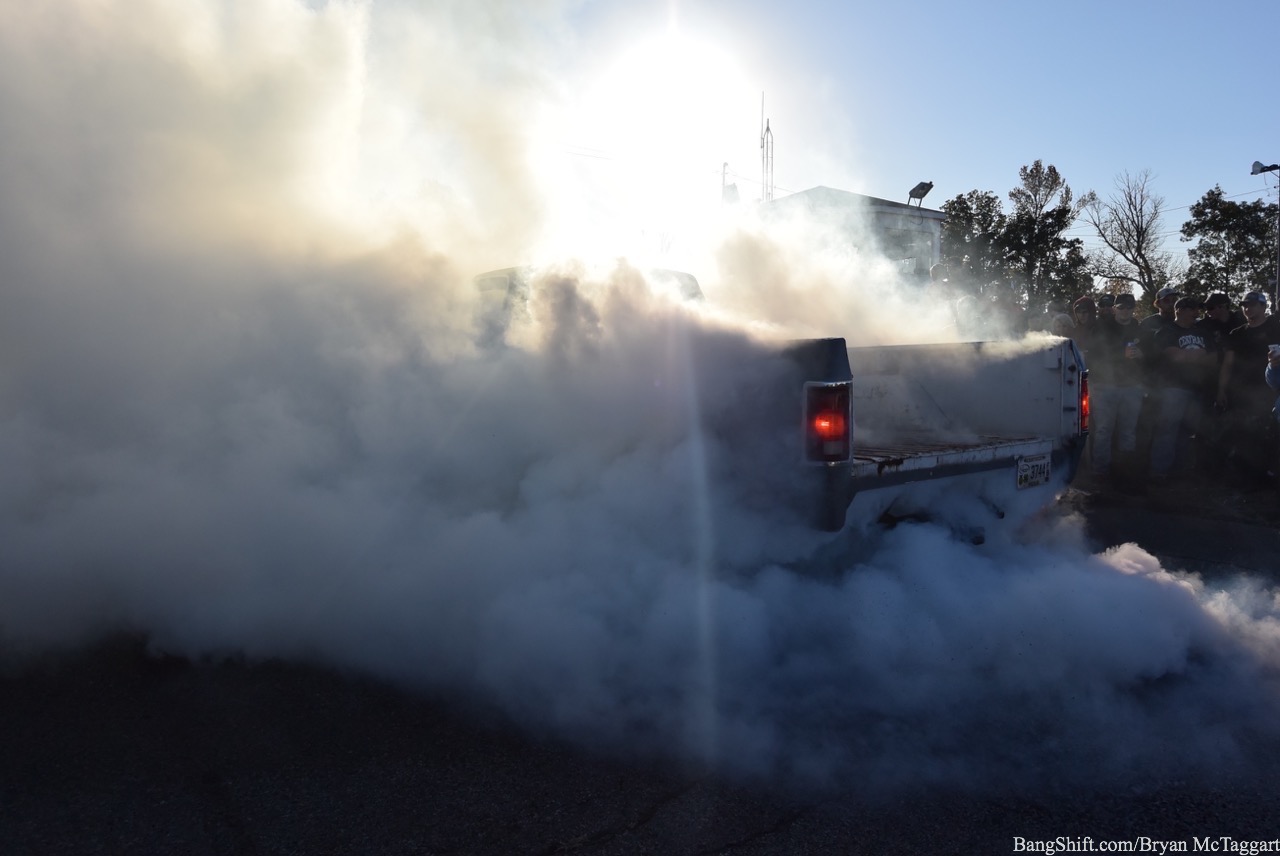 It’s been a busy few months at BangShift Mid-West. Ever since early August I’ve been splitting time between writing and playing Bob The Builder, fixing up the largest purchase I’ve made…a foreclosed house. In between stories I’ve been gutting floors out, fixing plumbing issues, and creating not only a living space for myself, my wife and our pets, but a useable office so that I don’t have to commute half an hour every day just to surf the Internet. I’ve done a good job of working on the house, but the email I got last Monday convinced me to take a break: “If you’re not busy on Saturday, there is gonna be a huge diesel truck drag down in Hardinsburg, KY at US 60 dragway…lots of big name sponsors. Wanted to see if you wanted to get in and put it on your site..”

US 60 Dragway is a neat little 1/8th mile joint about an hour and a half from the house, so I scheduled the trip in and at lunchtime on Saturday, I packed up my camera gear and headed north. Along the way I enjoyed a nice autumn cruise on the highways, which were lined with colorful trees. Nice, calming and peaceful…and once I finally found the small town of Hardinsburg, that would be the last of the peace and quiet for that day. US 60 Dragway is right off the highway. Not down a backroad and hidden in a field somewhere…like RIGHT off of the highway. I pulled in, parked, got my gear together and hunted down the people I needed to see so that I could photograph on-track. Normally there are hoops to jump through, waivers to sign, and a high-visibility vest to get. Here? “Just don’t walk in front of a f—in’ truck, alright?” I could work with that. 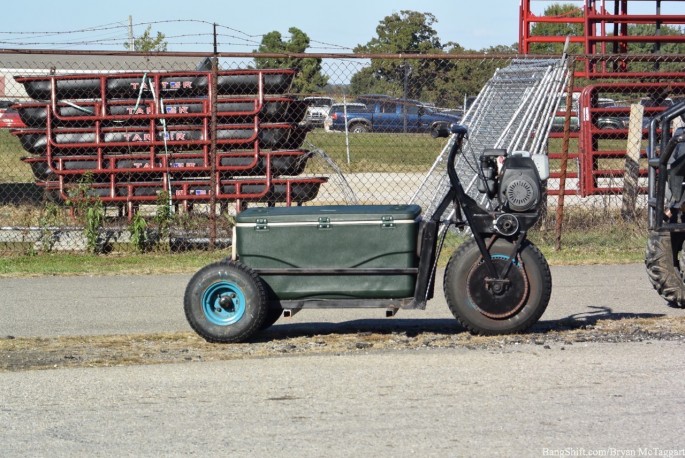 Sweet pit bike, right? The owner threatened to enter it in the burnout contest!

As far as trucks racing, it was a diesel event…nothing really out of the normal there. Plenty of set up Power Strokes, Cummins and Duramaxes were running the 1/8th, and not one single Volkswagen TDI was around to cloud up the pristine afternoon sun. There were even a couple of non-diesel trucks, including a nasty street-racing Chevy stepside and a Ford Ranger that was packing V8 Explorer running gear. I caught up with the Ranger’s owner, and the truck had just been finished and was undergoing it’s first tuning sessions. 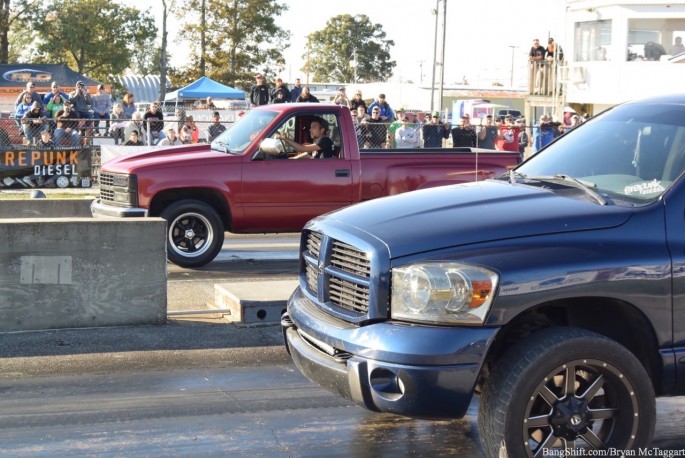 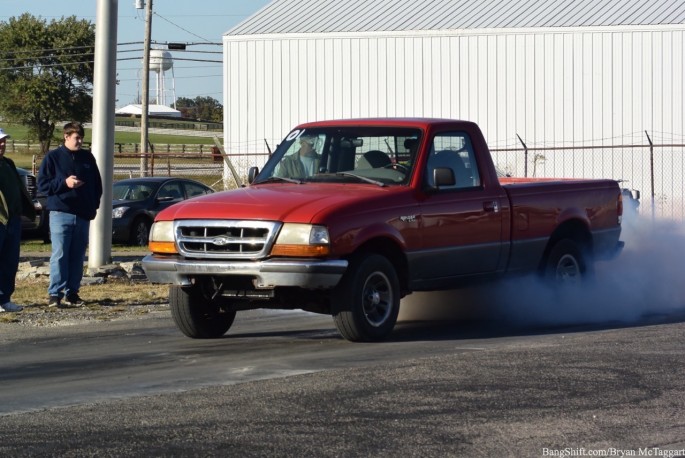 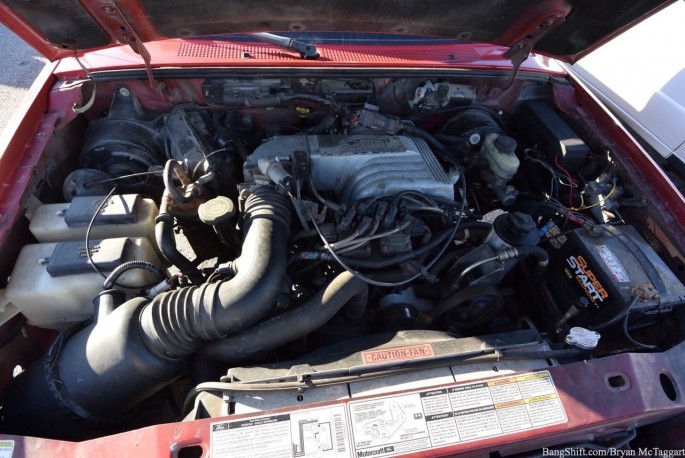 All was going well until one truck blew an oil line and greased an entire lane, the entire length of the track. Normally, that means a couple of hours of downtime while cleanup crews scrub the track thoroughly. Not here…in one of the best emergency re-schedules I’ve ever witnessed, the burnout contest got moved up a couple of hours to right freaking now. Hey, one lane was open and both burnout boxes were available, why not keep the audience entertained while the track crew worked?

Up first was the green King Ranch Ford. The owner proceeded to cover his rear quarters completely with rubber while fogging the entire starting line area for mosquitoes. Once his burnout was completed, he backed out of the nearly one-inch deep divots he left in the asphalt and headed off of the starting line no worse for the wear. 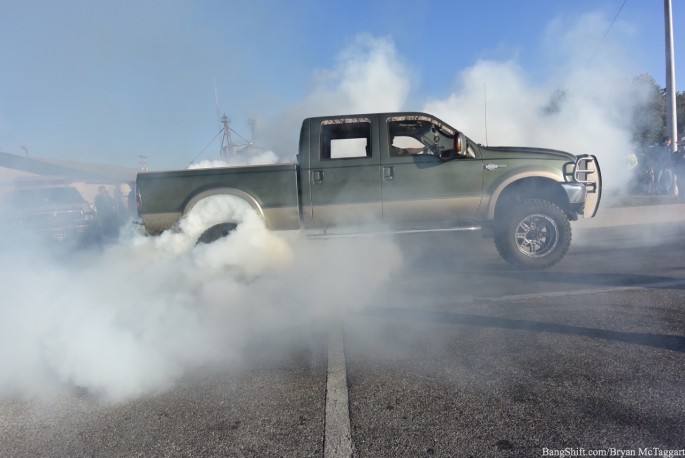 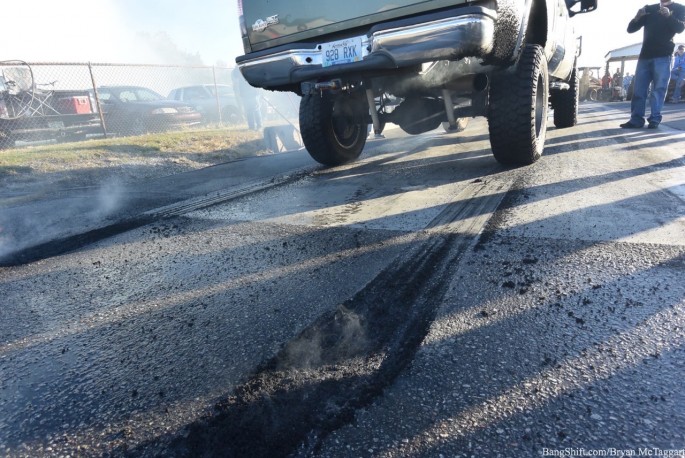 Round two went to a rough early Cummins Dodge sitting on low-profile rubber. I only got three pictures of that truck, because those rear tires were flat-out annihilated, enough to block out the sun momentarily. Once the Dodge was backed out of the burnout box, it became apparent that the 12-valve did not enjoy the abuse. A good-sized puddle of oil was sitting right where the engine was sitting. To the driver’s credit, he personally came up and started cleaning up the spill. 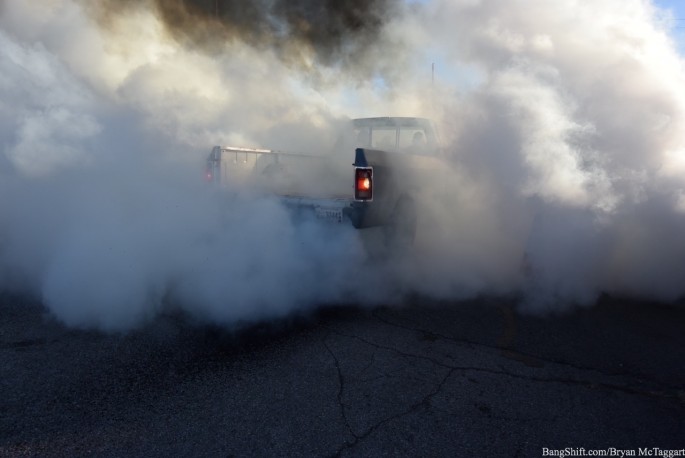 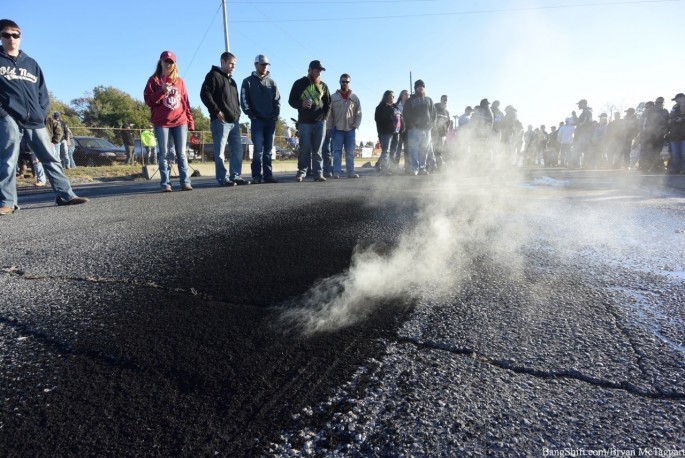 Once that situation was sorted, that’s when the white Ford rolled up and when all hell broke loose. I want to make it clear, the owner of this white King Ranch either wanted to kill this truck, was planning on rebuilding it over the winter or was hell-bent on winning the prizes, because this guy went for broke, literally. We are talking 100 mile an hour wheel speed, in fifth gear, and two fires afterwards…one in the engine bay and one at the rear brakes. 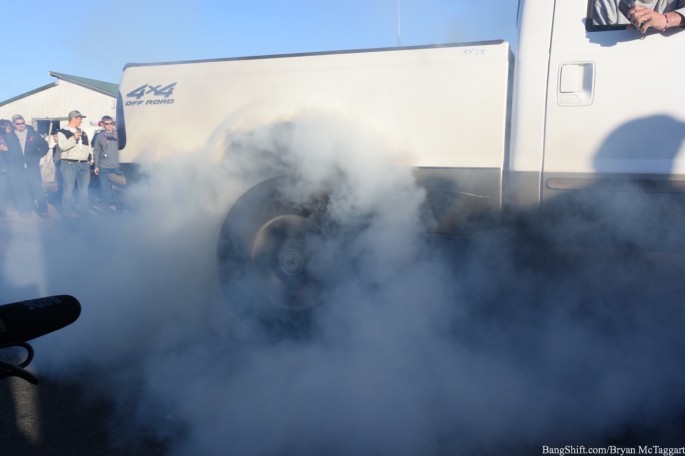 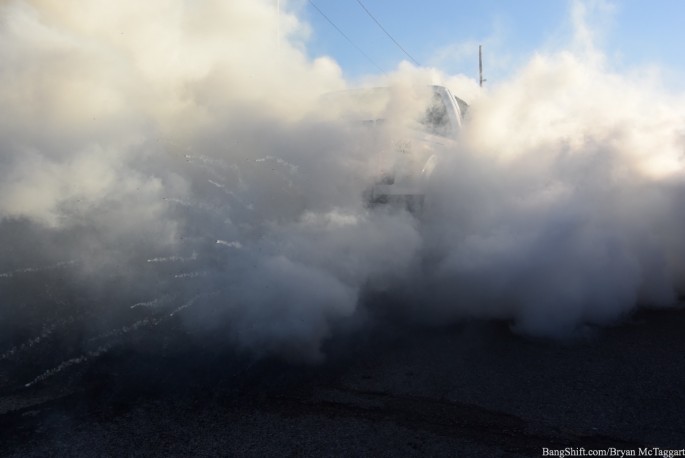 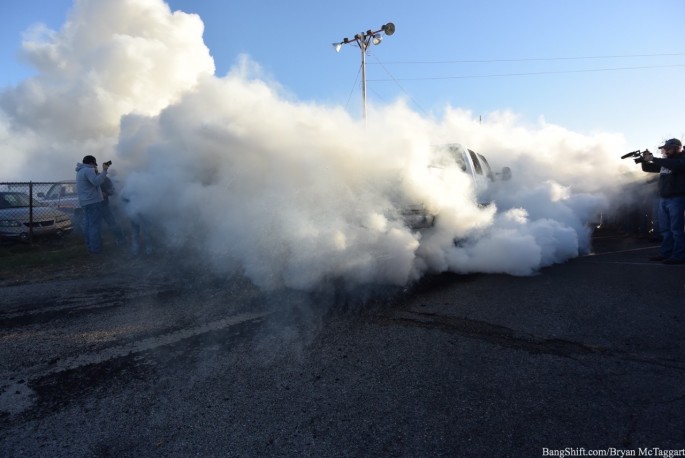 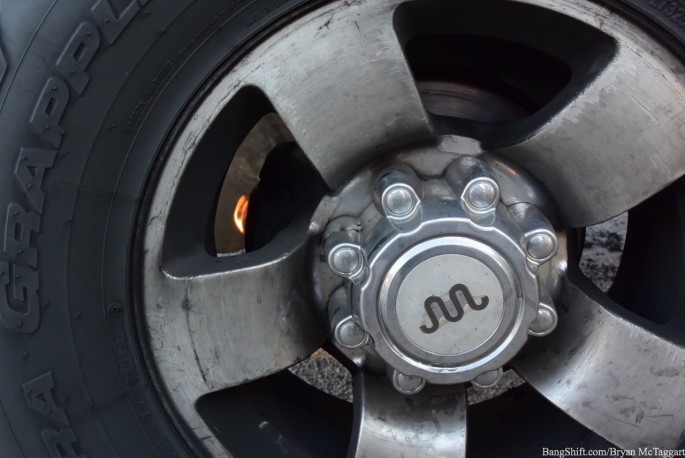 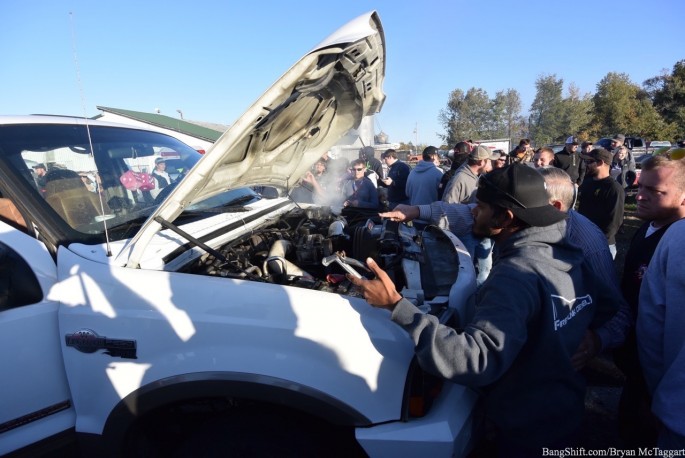 Say what you will about the diesel crowd, but they will use every single solid bit of what they bring when they come out to the track…broken parts, wall-scraped body panels, fried rubber and all.

Be sure to check out more of the event photos below!