Video: Ride Along On A Helmet During A 5.98-second Quarter Mile Nitro Drag Bike Pass! 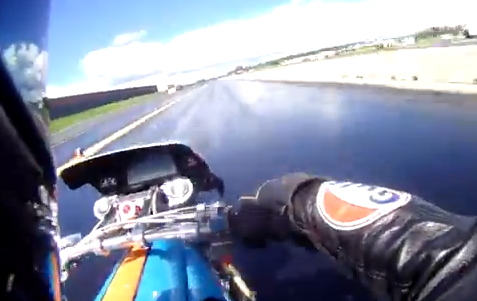 Guys that ride nitromethane burning motorcycles are completely nuts. This video shows British rider Ian King making an awesome 5.98 second lap at the Tierp Arena in Sweden. There is no crash, no great save, no weirdness…other than the fact that this is a freaking nitro burning motorcycle and everything about it is weirdness! The machine itself is sponsored by Gulf Oil and is a “Puma Yamaha”. We have not the faintest idea what that means, but we do know that it really hauls down the course. The acceleration is nuts when King throws the clutch out and he keeps the throttle pinned for most of the run. It seems to us like he was out of it early on the top end. Despite that fact, the King became just the second rider outside of North America and the first rider from the UK to make a sub six second lap on one of these bikes. That’s way cool. King is a dominant European rider with six championships to his credit.

These bikes are good for 1,000-1,500hp out of their supercharged and nitro injected engines. They will pull 3+ Gs off the starting line and use monster rear slicks to stick the whole operation to the track. These are certainly the kings of the motorcycle drag racing world and even if you are not a bike guy, anything that dips into the fives on the strip should be killer enough to get your attention!

PRESS PLAY BELOW TO SEE IAN KING RUN 5.98 FROM HIS HELMET CAM!