Vintage Drag Video: What It Was Like to Be Two Regular Guys Running An Injected Nitro Car In The Early 70s

Jun 19, 2015Brian Lohnes1320 Videos, BangShift 1320Comments Off on Vintage Drag Video: What It Was Like to Be Two Regular Guys Running An Injected Nitro Car In The Early 70s 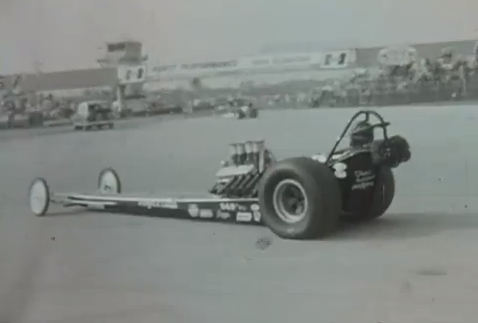 Chances are that you’ve never heard of the Best and Gordon Purple Haze A/Fuel dragster from the early 1970s. Don’t worry, you are not alone because we hadn’t either, and frankly that’s the beauty of this video. These two guys were friends, drag racing fans, and racers before joining forces and going nitro racing on a budget that two guys with regular jobs could afford. What you’re going to see is the real life example of the proverbial scenario that everyone who laments the current state of drag racing brings up. This (the early 1970s) was truly the time when regular Joes still had a shot at the big time, with the big time fuel.

You’ll see the tandem’s first car, a slingshot with an injected nitro slurping rat motor as well as their second car, which was a rear engine affair with the same 430ci big block Chevy on fuel. You’ll also see their humble shop, them painting junk outside, the car making passes, burning out, and one shot of the car coming off the push truck at Indy that is so frigging cool, we’re lost for words.

These guys didn’t win a whole bunch of races. They didn’t dominate the headlines. They did however do what lots of us dream about. They hit the road and traveled with their race car to points far and wide, raced, had a blast, and preserved some memories on video for those of us in future generations to enjoy. This video rules.

PRESS PLAY BELOW TO SEE THE VIDEO –