Sep 26, 2014Brian Lohnes1320 Videos, BangShift 1320Comments Off on This Vintage Video Of Oswego Dragway Is A Look Back At The Golden Days Of The Dead Track’s Life 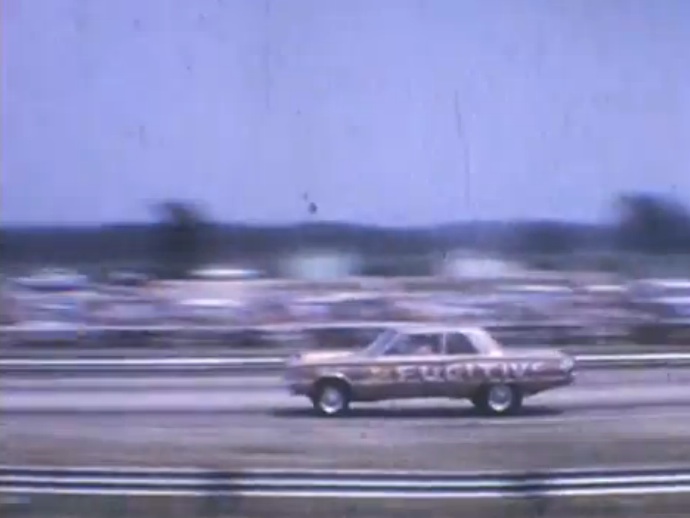 (By Greg Rourke) – Those that know me know that I love me some sportsman drag racing. To me, a Friday night test and tune is as good as Sunday at the Big Show.  My friends also know I love the long gone Oswego Drag Raceway.  In fact, the new spacious, luxurious Chicago area field office of BangShift.com is two miles from the property.

The track operated from 1955 to 1979, and some say it was the first purpose built drag strip (Editor’s note: we’d respectfully dispute those “somee”). It was never a landing field or abandoned road. In it’s time, all the “names “ raced at The Big O. Legendary promoter Ron Leek was involved from the beginning, before leaving to build Rockford Dragway. While taking a break from unpacking the spacious, luxurious field office we ran across some vintage film shot at Oswego in I’m guessing 1966.

We have a good collection of Gassers and other doorslammers of the era, most of them all nose high and not a narrowed rearend among them.  Dragsters getting push started up the track to turn around on Oswegos notorious uphill burnout box. Arnie “The Farmer” Beswick  lines up against Gary Dyer in Mr. Norms Coronet, both fine examples of  A/FX cars turned into funny cars. Wheelstanders were part of the show this day, including Wild Bill Shrewsberry in the LA Dart. Also included is a Corvair sedan wheelstander. I’ve seen the ‘Vair pickups and vans turned into wheelstanders, but never a sedan. They liked running back up the track toward the starting line on two wheels back then, try getting away with that today. As if this wasn’t enough, dig what appears to be a Turbonique powered early Dart.

Now if you’ll excuse me, I need a moment. Oh, and you’ll want to watch this in full screen mode.

Help Hedman Nation Reached 20,000 Likes! Give 'Em Another One To Celebrate 60 Years In Business - From Zoomies To Long Tubes They Build 'Em All Found: An AMC Pacer That Nobody Should Be Embarrassed To Be Seen In, 401 And All