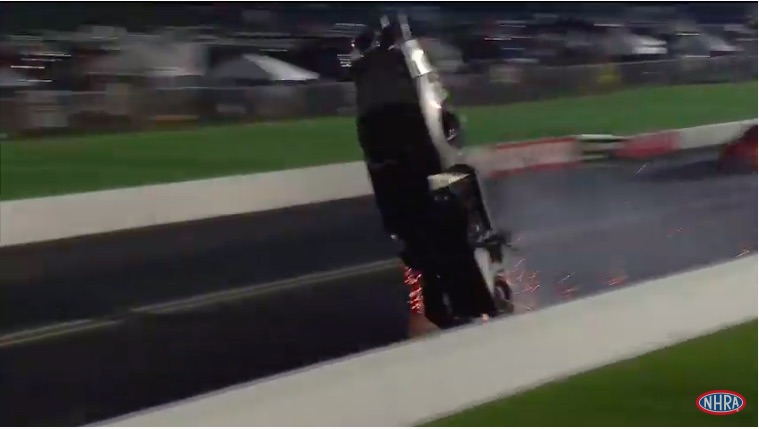 About five days into the 2019 Chevrolet Performance US Nationals, there’s a level of fatigue and tiredness that begins to settle over the whole place. Racers, fans, and even the people working the event are feeling the effects of their long days and effort. Then something like this happens and snaps everyone right back to attention. You are going to see NHRA racer Chad Green suffer the worst wreck of his career during the final qualifying session of the E3 Spark Plugs pro mod category.

Green was lined up with Jose Gonzales who was driving his turbocharged Camaro in the other lane. You will see that both cars go into coordinated tire spin, shake, and then slides. The race track was not bad. Moments ago an exhibition ProCharger equipped car ran 5.88 seconds down the same surface so this was not a deficient track as much as it was two powerful cars trying to apply too much of it to make the field.

Gonzales did not have a great run either, as mentioned above. His car crossed the center line and he hit a timing block but things were going far worse for Green who’s machine smashed into the wall and then took flight. As the car skidded down the track on its nose, the rear tires began to rotate downward and in s slip second the car landed flat on all four wheels, hammering itself into the ground.

Green was responsive and talking to the NHRA Safety Safari after the wreck. They had concerns about possible injuries so they cut him out of the car and took him to the hospital. We understand that Chad is in good hands and will be making (eventually) a full recovery from this truly scary wreck.