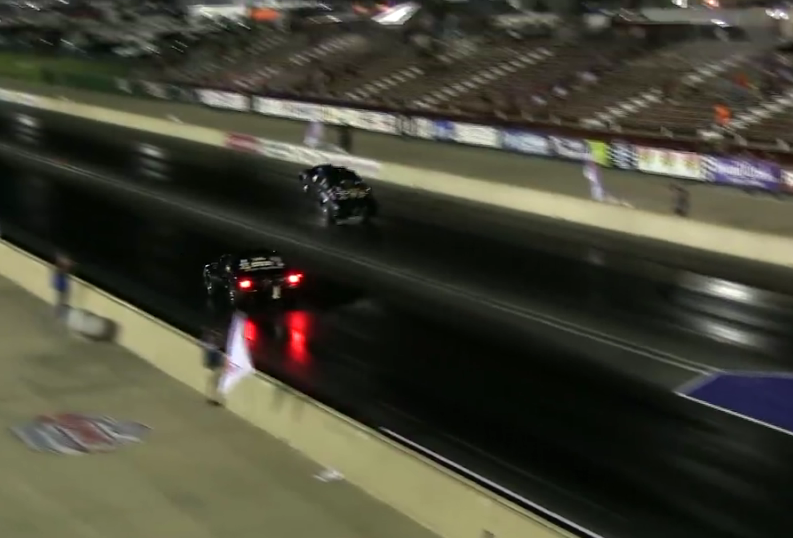 Of all the classes that have provided thrills this weekend at the 2015 NMCA World Street Finals at Summit Racing Equipment Motorsports Park, it has been the Mickey Thompson Radial Wars category dominating the “Holy S#$T” moments. These guys with 3,000+ horsepower hooking and booking on tires that have no right to be able to handle this power are nuts. If there is any question as to what the premier radial tire is on the market today, you have not been paying attention. These guys are making cars do things that even the Mickey Thompson engineers never dreamed up. Among the craziest is Florida’s Frank Mewshaw (pronounced – Mee shaw). His third generation Pontiac Firebird has tried to take flight multiple times over the last couple of days with his final qualifying pass being the most lacking in front tire track contact time. The video of this pass is below.

Here’s the thing that impresses me most about this video. Mewshaw has some real huge “courages” because when most cars come up a little the driver pedals. Frank was nearing blow over status on this deal before he angrily pulled his foot out to get the car down and when he did it landed HARD and went into a second wheelie at speeds which are mind boggling for a car running the eighth mile. Frank is chasing a championship in the Mickey Thompson Radial Wars class and wanted a strong qualifying run to cap his efforts before eliminations on Sunday.

Mewshaw WheelieCheck out the insane wheelie here by Mickey Thompson Performance Tires & Wheels Radial Wars driver, Frank Mewshaw in the right lane during the final round of qualifying tonight at Summit Motorsports Park.

Burnout Mondays: The "Trophy LTD" Crown Victoria Prerunner Hazes Them Off If You Actually Create A "Free Candy" Van, Expect To Wind Up On The Evening News!