Watch Jack Beckman Suffer A Violent Funny Car Explosion In Atlanta – It Was An Incredible Day!

May 18, 2014Brian Lohnes1320 Videos, BangShift 1320Comments Off on Watch Jack Beckman Suffer A Violent Funny Car Explosion In Atlanta – It Was An Incredible Day! 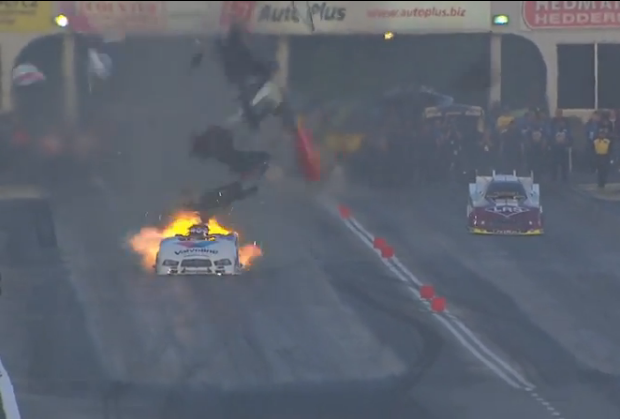 Just when you thought it was safe to go outside….we have more funny car violent from Atlanta! Saturday at the Summit Racing Equipment NHRA Southern Nationals was one of the most insanely nuts days that I have ever spent at a drag strip, bar none. Between the funny cars exploding and a host of other stuff that I will talk about next week, this was a day punctuated by things that none of us really saw coming. From the crashes, to the big runs, it was one shocker after another.

Since we already highlighted Tim Wilkerson’s video we need to highlight this one “starring” Jack Beckman because as violent as Wilk’s pop was, this explosion is roughly 60,000% more violent. Obviously, something in the valvetrain failed and allowed the fire in the combustion chamber to escape into the intake manifold which is full of fuel and the results are obvious. The engine explodes and the boy disintegrates into tiny shards of carbon fiber and other busted up material. Beckman is left unscathed and hops out of the car, even bowing in a theatrical style for NHRA Safety Safari crew people to drive past and help the wrecked driver.

This was one big boomer and it took the breath of the crowd away for a while as the Safety Safari hustled to clean it up.

PRESS PLAY BELOW TO SEE A FUNNY CAR GRENADE IN THE MOST VIOLENT POSSIBLE FASHION!

This 1951 Muntz Jet Could Be Yours! Is The Muntz Jet The Ugliest Of The Strange 1950s Sports Cars? Watch Tim Wilkerson Experience An Insane Funny Car Explosion At The Summit Racing Equipment NHRA Southern Nationals