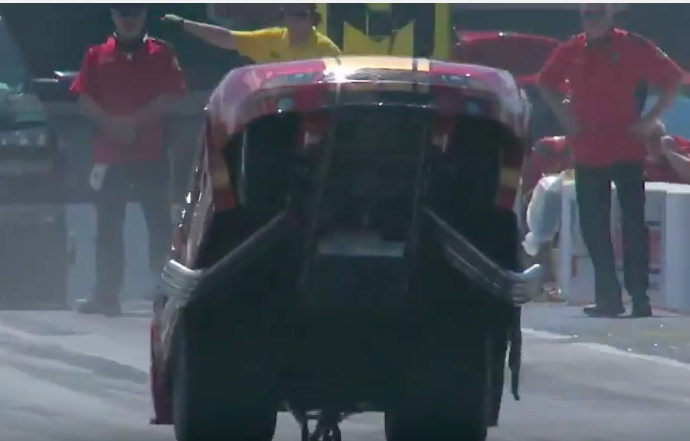 The wheelie bar is a very important tuning tool in many drag racing classes. Alcohol funny car is certainly one of them and when there’s a failure in setting the bar up properly or a failure with the bar itself, the results are immediate and spectacular. Marie Ferriolo, a young and talented top alcohol funny car racer suffered the most insane funny car wheelstand we have ever personally seen at the NHRA Four Wide Nationals yesterday when a rosette weld on the bar broke just after launch the the car literally drove itself vertical before smashing back down to Earth and really gnarling up the front end. Marie was fine and the car able to be rolled off the top end of the track but there was clearly some chassis damage from the near power-wheelie over backwards incident.

The nuttiest part of the whole thing is that from the announcing deck at Charlotte the view is not the best to the right hand set of lanes at zMax. That being said, when the car went vertical there was some question immediately as to whether it was the body that had come unlatched and blown upwards or if it was the entire car. It was obvious the entire car because of the violence of the wheelstand. You’ll hear me make mention of the fact that those of us in the tower thought it may have been the body coming up at the moment it happened but we quickly figured out what happened.

Many people were assuming that the wheelie bar had been improperly locked into position or something of that nature when it was in fact a weld that broke under the incredible stress that the car puts on the wheelie bar leaving the starting line. Check those bars for health, all you funny car racers out there!

Marie was OK and we’re sure that the Ferriolo team will have that car in for repairs sooner rather than later. Just incredible!