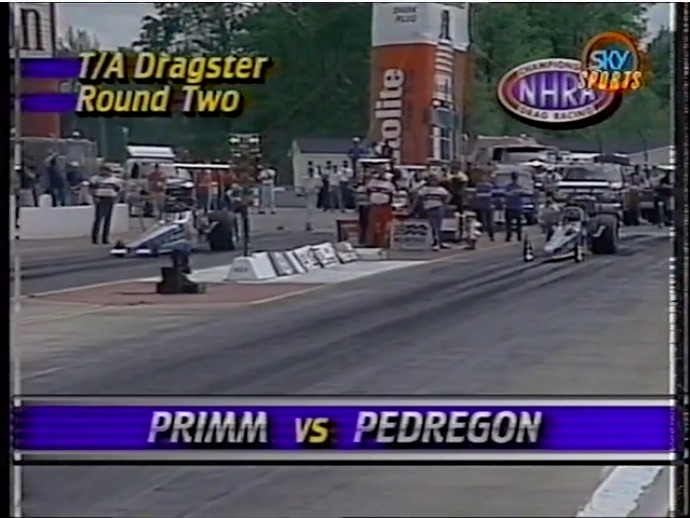 This is some fantastic video from the 1991 NHRA season and it is not fantastic because of fires, explosions, or mechanical disasters. It is spectacular because it’s the coverage from the 1991 NHRA SportsNationals with coverage featuring top alcohol dragster, top alcohol funny car, and competition eliminator. The broadcast team is Steve Evans, Don Garlits, and Brock Yates. Garlits and Evans handle the call from the “booth” where as Brock Yates is the top end reporter.

There are many legends shown here. Guys like Tom Conway, Vern Moates, and others in the alcohol categories and in the sportsman ranks there’s David Nickens, David Rampy, and a host of others. The NHRA SportsNationals is still a happening thing and it is still the toughest sportsman race that the NHRA offers because it brings the best competitors from around the country in classes that they are surgically skilled in.

Of course you will see plenty of Pat Austin who was the guy that had the top alcohol funny car class by the neck at this time in history. You’ll watch that team go to work and face an all-time NHRA funny car legend in the final round. This was the time that the class was seeing cars run in the bottom 6-second range and there were lots of them, putting on a great show. In comparison, today they are running 5.30s at over 270mph when the conditions are right.

Have fun with this trip back in time!

A Critical Review: Gale Banks Watches The Hoonigan Diesel Dyno Video And Has Plenty To Say Almost All There Corvair: This Turbocharged Corvair Flat Six Is A Neat Engine But The Buyer Comes Up A Little Short On Parts