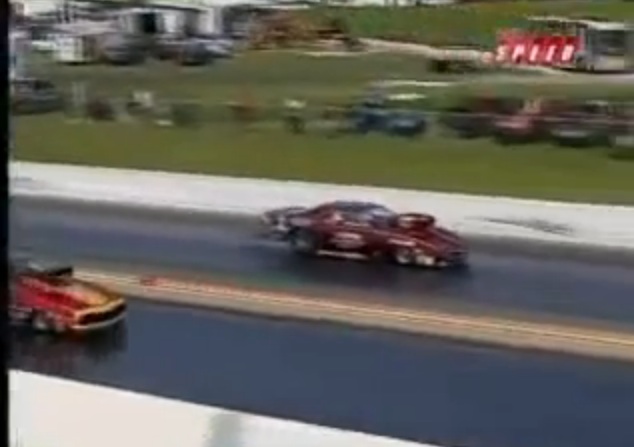 Pro Modified is known as one of the most exciting classes in drag racing, because of the parity between cars and power adders, as well as producing fast, eventful, and unpredictable races. This video brings us back to the IHRA days where it finds two heavyweights in the Pro Mod class, Ed Hoover in the blown Camaro up against Mike Castellana in the nitrous Firebird, who have always run strong and been front runners in the class.

The two leave the starting line launching hard off the two-steps, quickly onto the bars. Just as they get to the tree, Castellana has a huge nitrous backfire sending fire out of the scoop. At the same time Hoover breaks his transmission, sending the nose of the car crashing back to the ground from the wheelie. Castellana and Hoover begin a coast fest down the track like no other, with Castellana unable to re-fire his engine, and Hoover helplessly revving his engine with no power to the wheels; it is anybody’s race.

The two are neck and neck all the way down the track which seems like forever, and Hoover seems to have a little more mph as they are coming to the stripe… Both cars roll through the finish line with identical 31.414 second passes! Castellana winning the race on a holeshot, .035 to Hoover’s .135 reaction time, in an incredibly slow, exciting, and eventful race with no surprise this would happen in the Pro Mod class. The TV host Clay Millican, puts it the best when he calls out, “This is turtle racing.”

PRESS PLAY BELOW TO SEE THIS BIZARRE CONTEST PLAY OUT!

Brains Or Balls? Watch This Excavator Operator Take The Quick Way Down A Hill - Does He Make It? Video Fun: Multiple Engine Miniature Pulling Tractors Hauling The Sled Put On A Great Show