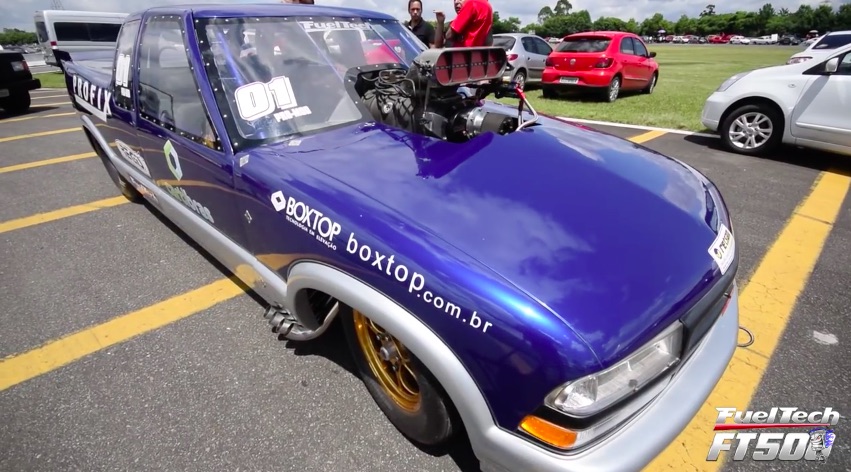 Aaaannnddd we’re back! Yes, another day another awesome video from the Brazilian drag strip known as Curitiba Autodrome. This time we’re not focusing on the big jump in the right hand lane of the track but we’re focusing on a blown S10 truck that is immaculate, awesome, and all kinds of crossed up during an attempted run at the facility. The last time we saw a driver put this much steering input into a car was Ken Block when we were riding shotgun with him a few months ago.

The truck is a beautiful piece and we’re not sure if it was imported from the USA or if it was built locally in Brazil but we can tell you that the motor has USA written all over it (literally). The Littlefield blower on top is awesome, the MSD magneto hanging off the side is sweet, the funny car style zoomie headers make beautiful noise, and while we cannot directly identify the heads the engine is a “Chevrolet” style big block and boy does it sound healthy. With a nice crisp exhaust note this is a real power maker. Unfortunately for the driver the track isn’t exactly ready to handle what he’s about to throw at it.

The truck ignites the tires at the hit of the throttle and goes into a black tracking, sideways, yawing attitude for the entire time that the driver has his foot on the throttle To his credit he keeps the thing off the wall but it gets pretty hairy! With multiple camera angles you will see the run from both in front of and behind the truck but the real fun comes when the camera goes to the interior position and you can see this guy working the wheel like a maniac to try and salvage something.

Bring these guys to a USA no-prep race and they may kick all of our asses. Why? No-prep is the only way they race! Credit where it is due. The truck rules and the guy was doing the best he could with what he was facing. Yee haw!

Retro Review: This MotorWeek Review Of The Then New 1991 GMC Syclone Is Awesome The American Powertrain Parting Shift: 292 Cubes of De-Stroked Boss 302 at 9500 RPM