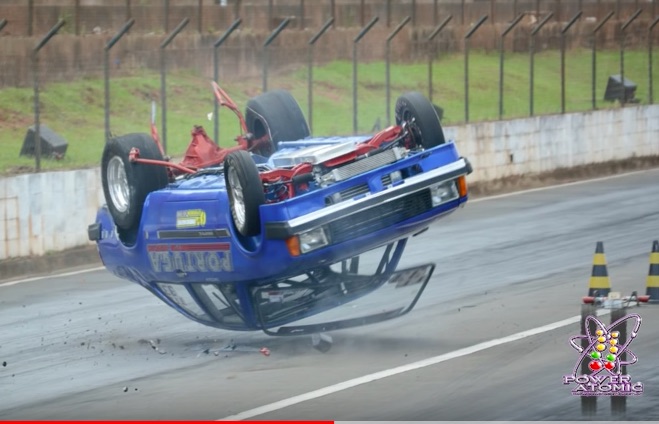 It is never good when you are able to try and make a judgement call on the type of engine a car is powered by via the oil pan facing toward the sky. In this case we’re taking you to a small strip in Brazil where a drag built Chevrolet Chevette is ready to take on what looks like an eighth mile course. This video is in to distinct parts and the second one is the best. First first part is kind of a grainy, crummy video. The second part is beautiful high resolution photos of the whole calamity happening. What calamity you say?

As you will see, the rear end housing breaks free of its mounts and that triggers a chain reaction of events that has the little car rolling upside down on the track with the pinion facing the sky. Thankfully it lands on the wheels and the drive is OK enough to climb out of the thing, undoubtedly wondering what the hell happened. The craziest sensation for the driver had to have been when the rear end of the car leapt several feet off the ground and came bouncing back to Earth.

We have seen this scenario when the whole housing leaves the comfy confines of the springs but in this case it just ripped out, rotated, and mangled the rest of the car. We do not know if the car was a new build or if it has 2,000 runs on it prior to this happening.

The strip that the guy is running on seems nice enough. They responded with multiple ambulances and had a wrecker ready to move stuff immediately as well. We’re dying to get to South America to check out their drag racing scene down there. Looks awesome…we’re sorry for the driver shown here.