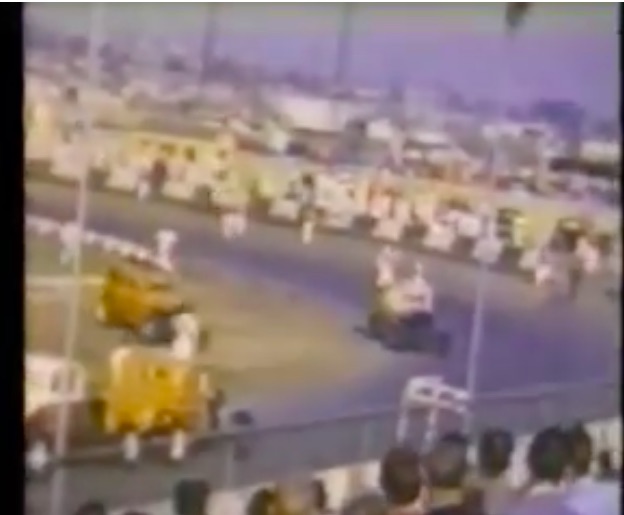 If there is an American racer who personified toughness above perhaps all else in his career, it’s Parnelli Jones. He has a lot in common with AJ Foyt. An amazingly accomplished and varied roster of event wins, talent for days, a will to win that’s immeasurable, and ball the size of church bells. Where did it all come from? The has been as tough as nails so long as anyone can remember and his racing career started when he was in his ‘teens at places like Gardena Stadium that you will see here. Hell, his nickname “Parnelli” was given to him by friends as a joke to put on his money card at the track as to keep his parents to know that he was actually racing there.

In this episode from his youth, Jones is racing jalopies at the stadium in 1956. Jalopy racing evolved into the various classes of sportsman stock car racing that we know and love around here now. These were the “Enduro” cars of their day. Basically worthless, stripped of anything not completely necessary, these were hardscrabble cars driven by hardscrabble racers. Racers like Art Atkinson.

As you’ll see, ol’ Art and Parnelli get into a mechanical scrap that then turns into a physical scrap. For all the people who talk about the stuff that happens at the track today, it’s the same song and dance that’s been going on for more than half a century. Atkinson leaps out of his car and mounts a frontal assault on Jones’ machine. Jones pops up through the roof to defend his turf and eventually jumps off the roof into the scrum that has developed because of every available crew member exiting the pits and wanting in on the action.

Press play below to see this video of Parnelli Jones getting into a scrap!

Watch This WRC Rally Car Fly 160ft In Finland! We Love These Lunatic Rally Drivers! In-Buggy Video: Ride Along In The Pressure's On Swamp Buggy As It Roars Around The Mile O' Mud!