Remember The 1990 Olds Trofeo? We Forgot And Then Saw This Old Motor Week Review – Weird and Interesting Car! 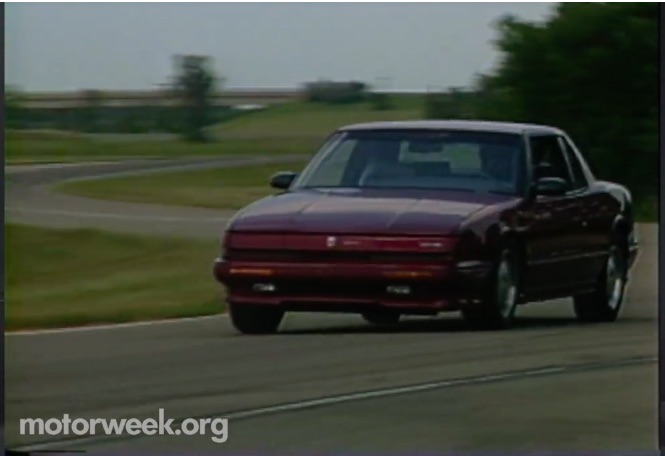 As I was putting David Whealon’s Lamborghini Super Trofeo photos together I had a synapse misfire and thought, “Wait, didn’t GM have a car in the early 1990s called the Trofeo?” As it turns out my memory was right and thanks to the internet we can see video of the 1990 Olds Trofeo in action. This is an old “retro review” from the guys and girls at Motor Week and it shows the car in its natural habitat and it shows just how much GM was thrashing around in the early 1990s to establish some identity and build something that people would want to buy. The Trofeo was kind of a sported up Toronado. Yes it had the same power but it had more doodads in it and it had a better handling suspension as well.

The car had the 3800 V6 in it, produced 165hp and managed to get to 60mph in 9.1 seconds. The quarter mile time as you will see was 17-second at 80mph. None of that is very impressive but they were decent numbers for the day, we guess. The real crazy part of this car though came in the interior and the available options. We about flipped when we saw the touch screen dash, the optional navigation (in 1990!), the flip out phone, and all of the other little stuff that this car was packed with. We are guessing none of it worked 6-months after the car was purchased but somewhere out there one of these cars is lurking with a fully functional group of slightly ahead of its time tech and that is cool.

I don’t think this is a bad looking car although the extended rear quarters are kind of awkward. From the front the design is cool. One of these as a rear wheel drive converted super stocker with a 454 on it would be the jams on a set of big tires, right? Maybe not, but I’m weird.

In case you forgot about the Trofeo like I did, here’s a refresher course courtesy of Motor Week!