ASA Stock Car Racing Inside The Pontiac Silverdome Circa 1983 – Short Course, No Shortage Of Carnage 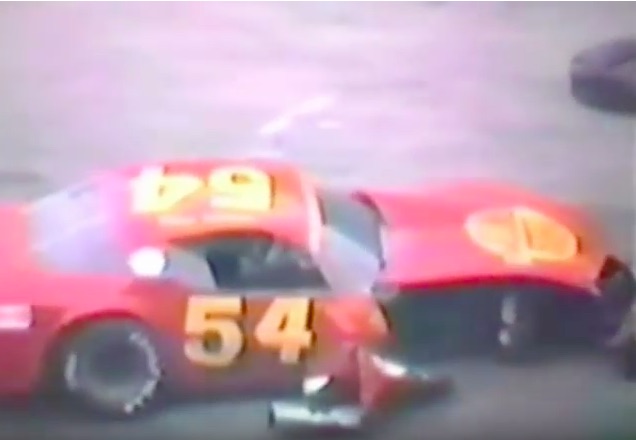 Imagine you bought a ticket to see a stock car race in the early 1980s with the likes of Alan Kulwicki, Butch Miller, Rusty Wallace and others competing. Imagine that race was being held inside a building on a flat concrete course that was way shorter than a quarter mile around. That was actually the case when the ASA (American Speed Association) brought their brand of stock car racing INSIDE the Pontiac Silverdome in 1983. The V6 powered cars were turned loose on a concrete floor and when we say turned loose, we mean it. These guys did not give each other an inch and as you will soon see, they did not lack for drama or carnage, either. Dig the car with the entire right front suspension ripped off, watch Kulwicki’s car get the rear axle knocked completely out of square and his crew thrash on the tiny “infield” of the track.

The midget cars we showed you yesterday made a lot more sense size and speed wise than these things did but it still seems like a cool show nonetheless. One thing that cracked us up was the complete lack of urgency anyone seems to have in removing the wounded car shown in the lead photo from the track. Everyone was just kind of standing around looking at each other on that deal. Obviously they cleared it off and went back racing.

How fast did the cars get going? Not that fast. How much passing was there? Way more than we expected to see, for sure!

Watch The 1970 World Figure 8 Championship From Islip Speedway As Shown On Wide World Of Sports! This Promotional Film For The 1955 Chevrolet Is Awesome Propaganda

One thought on “ASA Stock Car Racing Inside The Pontiac Silverdome Circa 1983 – Short Course, No Shortage Of Carnage”