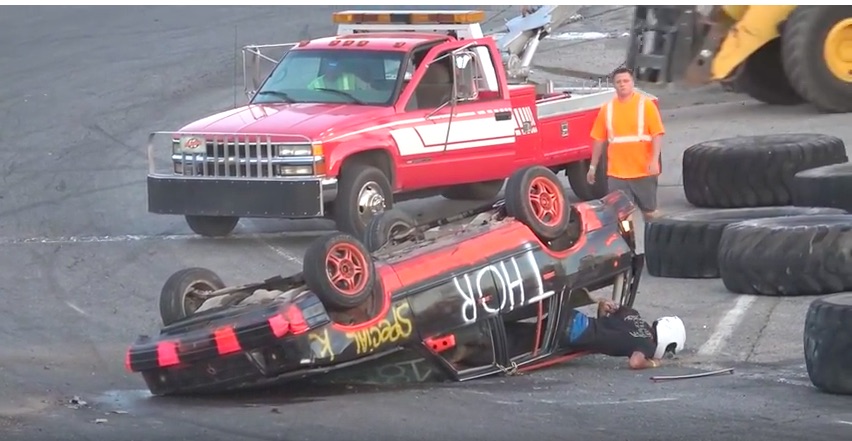 Thanks to the Carbon Video channel on YouTube we have this absolute gem of a film to show you. What you are about to see is a highlight reel of backwards racing action from Beech Ridge Speedway in Maine. This is crazy, dumb fun, and boy do we wish we were in the grandstands to see it happen live. The cool thing about the video is that the racer half of us was evaluating the different cars for their effectiveness in backwards racing. At first we thought that Nissan Maximas were the hot ticket here and then we saw the 1990s Lincoln show up and well, that sealed the deal. Trucks, likely because of their steepish factory rear gear ratios are not idea here. The short reverse gearing combined with the rear end ratio put them at a disadvantage. Lincolns were apparently engineered to go as fas backwards as they were to go forwards.

Then a funny thing happened. A little K-Car wagon with the name THOR spray painted on the side came into our lives and everything got better. The sun got brighter, the beer got colder, and the entertainment value shot instantly through the roof. The lunatic in this wagon should likely not be on the public streets with the rest of us, but his presence at this event made it supremely memorable for everyone that was there. Yes, he’s starring in the lead photo as well. Amazingly, this was maybe his second most spectacular feat of the film…you need to watch it to see the first.

Circle tracks thrive on wild shows like this. Drag strips have never really gotten in on the act and I guess when you see what happens to the racing surface over the course of this video you will know why. This rules.

Press play below to see this hilarious and off the wall video of backwards racing!

This Is What A Truck Driver Looks Like - A Cool, Calm, and Calculated Logging Road U-Turn The American Powertrain Parting Shift: Spectacular Ford Drag Team Video From 1969