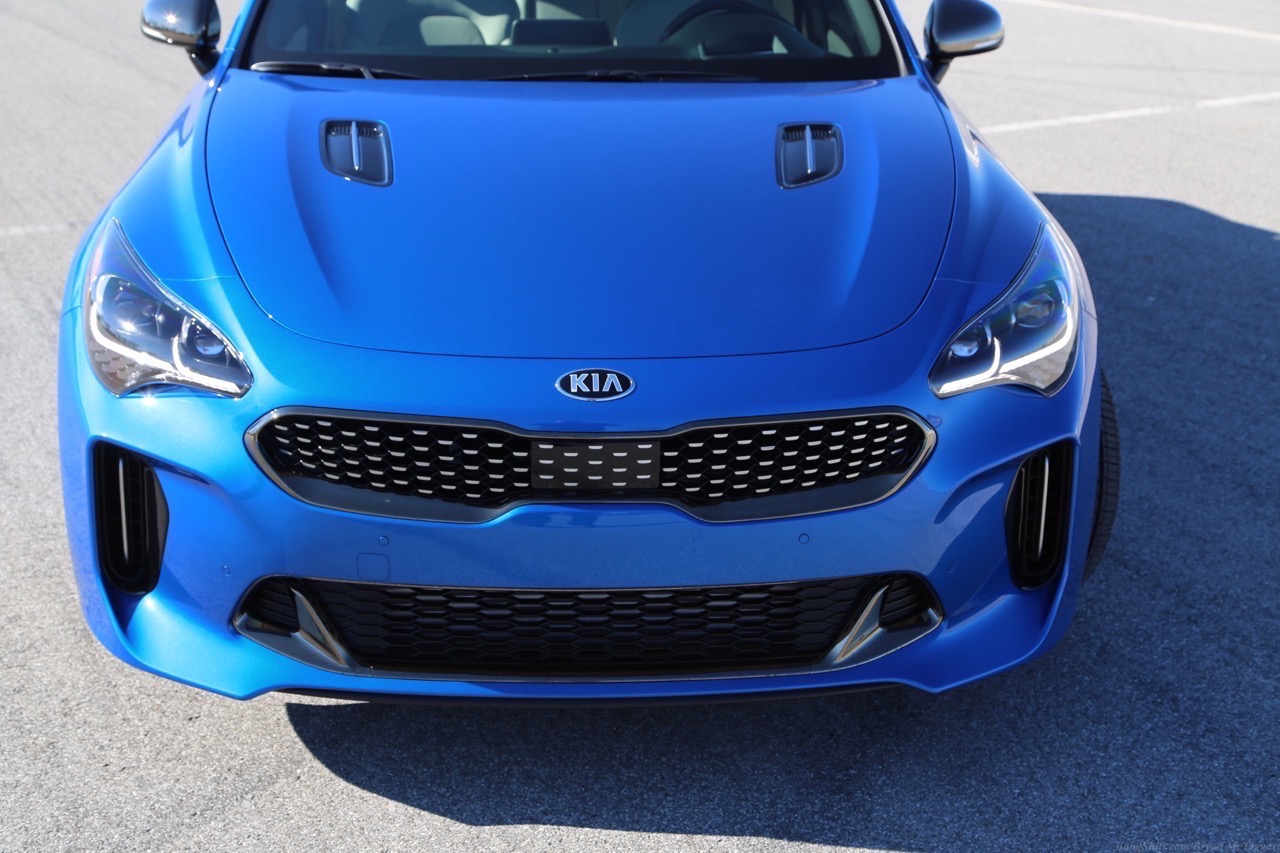 Got any good Kia jokes? Yeah, I bet you do. You probably have a good horror story or two, or maybe you just have the acronyms lined up and waiting (“Keep it, asshole”). Or maybe you just have some kind of predilection that automatically turns on your rage-meter whenever someone suggests that a Korean car might actually be on-par with whatever brand you align yourself with. None of this is a surprise. Before I drove this car, I confided in a friend of mine about this test drive and his words, verbatim: “I don’t care if it has 1,000 horsepower and corners like a motherf***er, at the end of the day it’s still just a Kia”. Yes, Kia’s reputation for making throwaway cars always steps into play. I’ve dealt with a 1994 Sephia. And numerous Ford Aspires (read: Kia Pride). And Sportages. And Optimas, and the XG350, and so on and so forth. Unlike 2008 GM and Chrysler during their really low points, Kia didn’t hit rock bottom, that’s where they started out.

And here’s the thing: unlike some people that I’ve met in life, instead of borrowing a jackhammer and trying to keep tunneling further downwards, Kia’s quality, fit and finish, appearances and longevity have been improving, markedly over the last ten years for sure. Kia took cars like the Spectra and Sportage SUV and focused on fixing the problem issues and the basic elements that early U.S. market cars and SUVs lacked. Around 2010, the company started to work on style, with their Optima sedan becoming a sleeper hit with it’s sleek shape. And now, for 2018, Kia has built something so out-of-their-element that all of the hyperbole that can be used is being used: they built a no-shit sports sedan, available as a rear-driver or an all-wheel-drive five-door hatchback. From the moment Kia dropped the GT concept car at the Frankfort Auto Show a couple of years ago, the automotive world has been watching. Is the world ready for a hot-rodded Kia, or even a premium-price Korean sedan that is aiming really high in the marketplace? We sampled a bit of the Stinger GT at SEMA during a test-drive and came away wanting more. And we got more, in the form of this Micro Blue 2018 Stinger GT AWD that the Martin Group allowed me to run loose with. 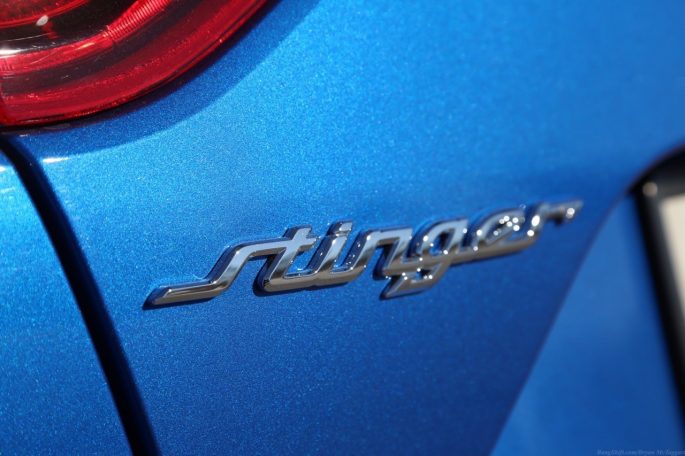 Let’s get this part out of the way right now: $52,405 is the number on the Maroney sticker for this GT2 AWD example. That’s a lot to choke down for a Kia, I get that. The GT2 is the bucks-up variation of the Stinger GT, the one with the twin-turbocharged 3.3L V6 that you want, and there were only two additional options over the base $51,400 price: $50 for a cargo net and $55 for wheel locks. So there is no pairing down further on this variation. But if you can live without the full-width sunroof, the thumping sound system and some of the technological add-ons, you can get into a RWD Stinger GT for $38,350 or an AWD Stinger GT for $40,550. You’ll still get the good V6, you’ll get the Brembo brakes, the LED headlights and taillights, and the 19″ wheel/tire package. The options are up to you, but before you read further, here’s the TL;DR summary: you can get a Stinger GT in the everything you want, nothing you don’t setup for a relatively decent price. I test what’s on the lot, not what is ideal for most readers or buyers, and this one was ready to roll. Got it? Ok, now read on to find out what driving this thing is like. 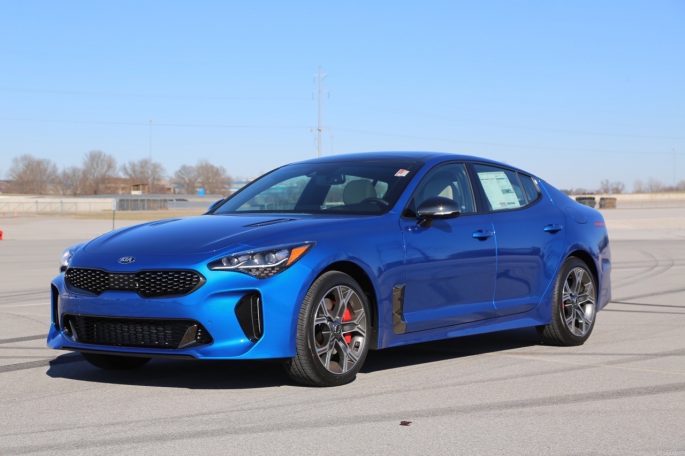 If you can’t say anything else nice about the Stinger lineup, you have to admit that Kia has come a long, long way in the style department. The Stinger GT is a handsome and fairly aggressive looking machine. It’s based on a shortened platform raided from the Genesis G90/Kia K900. 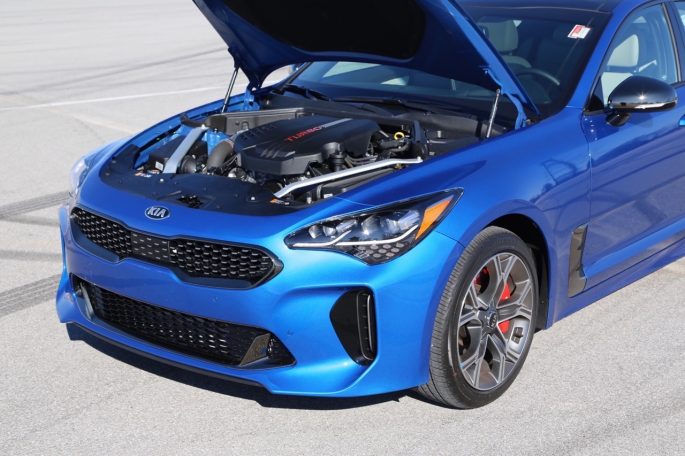 The party piece, the reason the Stinger GT has been on everybody’s lips: the aluminum 3.3L twin-turbocharged and intercooled V6. It makes 365 horsepower and 370 ft/lbs of torque, and has more than enough grunt to get silly with, especially in the rear-drive cars. YouTube search “Kia Stinger SEMA drifting” and you’ll see what we mean. You want to know the kind of grunt this Kia can make? Car and Driver managed to eek out a [email protected] MPH out of an early production model, and Road and Track’s times were within the noise. I’ll promise you this: line this car up against that Durango SRT I drove recently and you’ll have one hell of a drag race. It will be damn close. 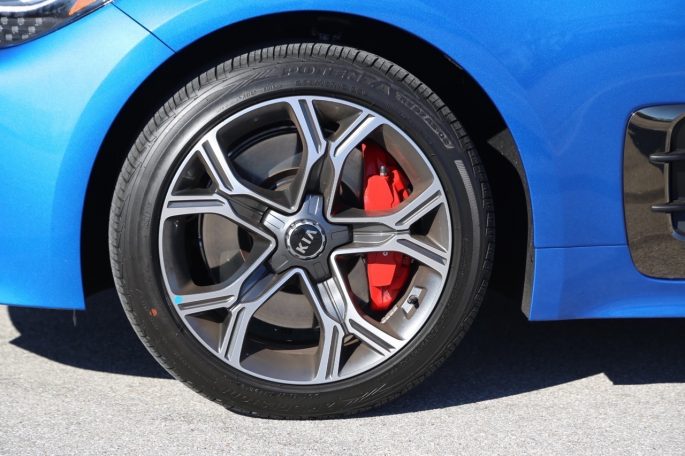 Like most other performance-minded cars coming out lately, going to Brembo for good brakes is just common sense. Here, it’s four-piston front calipers and twin-piston rears. For driver use, it’s radical overkill. For track workouts, they are a spot-on choice, hustling the two-ton machine down easily and with no drama. 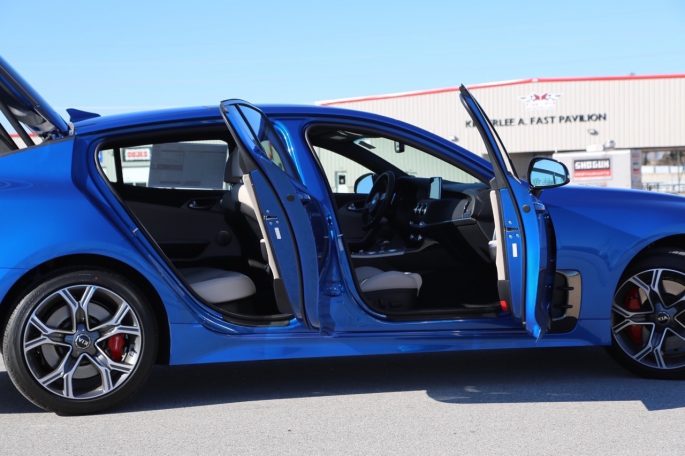 The Stinger GT is roomy. The front seats are exactly what you want in a driver-oriented car, and the backseat passengers aren’t going to be hurting for legroom…though taller passengers will notice that slope cutting into the headroom. The sound system in this car can silence any bitching…I don’t know what the Harman Kardon system goes to number-wise, but “3” was enough to feel the bass a little bit and “10”, still low on the scale, was bothersome. Nice! 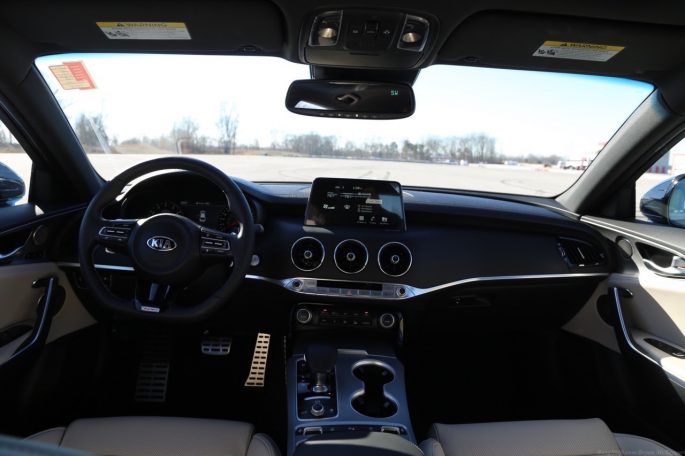 Overall, the inside of the Kia is a nice place to be, but I will nit-pick a couple of things. First off, this Stinger had the nannies…lane-keeper assist being one that cropped up a couple of times, beeping at you when it detects road striping and you don’t have your signal on. Luckily, the nannies are an option called the Kia Drive Wise package and are not standard equipment. The iPad-like center display is fixed in place, which for me personally kills the otherwise attractive dashboard. It is, however, very easy to use. The dead pedal is a treat, the flat-bottomed steering wheel nice and comfortable, and the heater will roast you out of the car in minutes. 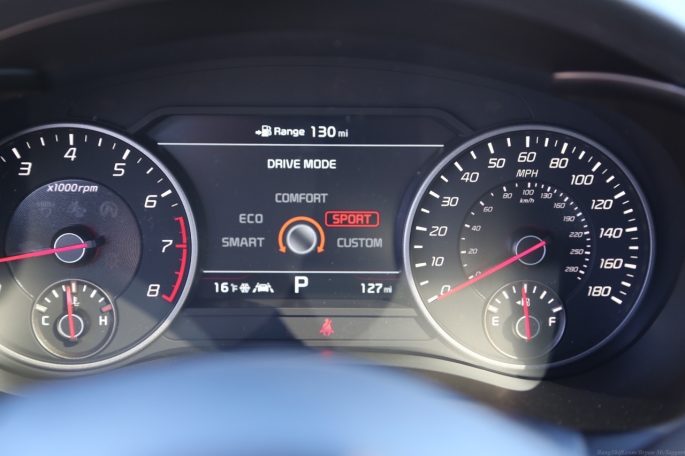 Another car where the drive modes actually do something! I tried out “Comfort” and “Sport”. Comfort is the one you want for daily use. Sport is when you want to play…the throttle gets seriously aggressive and the shift points in the eight-speed automatic get very crisp. There is a bit of turbo lag from a launch or at very low revs, but get into the RPM range just a little bit and the Kia comes alive like you poked the nitrous button. 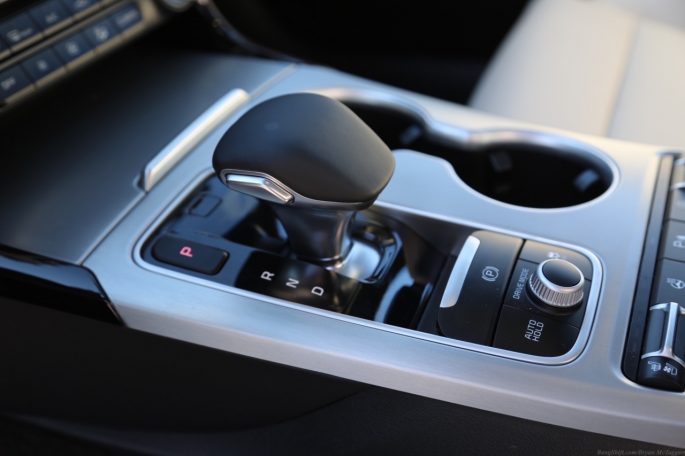 I might be nit-picky about the dash, but the shifter was genuinely annoying. The thumb button is an “unlock switch” that allows you to cycle between reverse, neutral and drive. To put it into park, you hit that “P” button. Shift lever or buttons…not both. 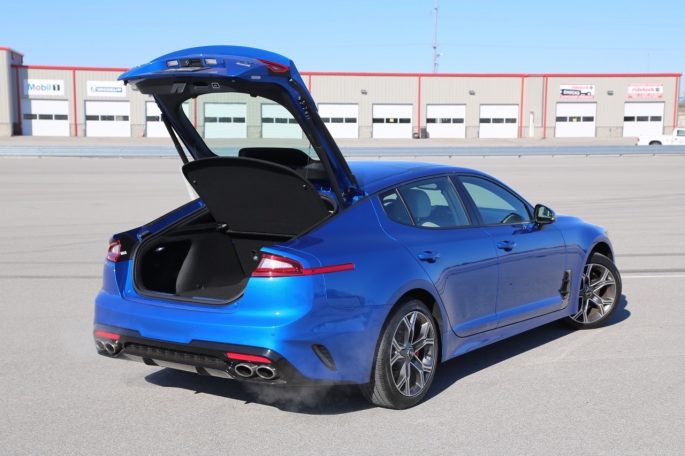 It’s a hatchback! And a nicely useable one. See, we do care about practicality here. Driving the Stinger GT around town is a pleasant affair, though the virtually telepathic steering inputs initially had me using the word “nervous” a lot. The steering is that direct, though…you move that wheel any and the wheels will go with you. Overkill for a commuter, perfect for a road rocket. But the Kia isn’t a brutal-riding sedan…it’s not soft, but it’s not spine-compressing, either. That “GT” badge is accurate here…this car will make the drive enjoyable without kicking your ass the whole time. 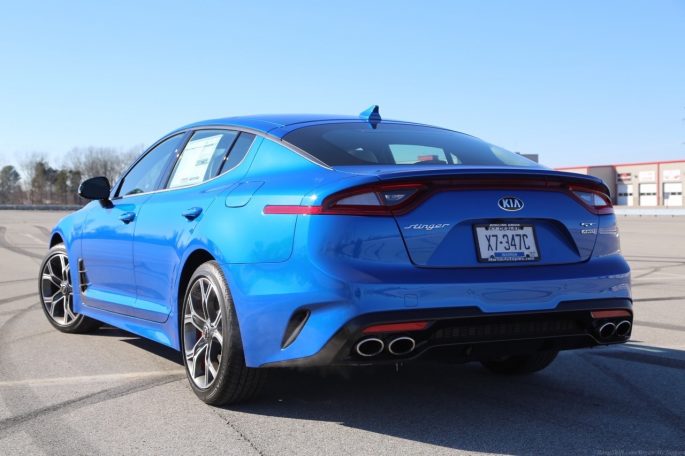 Mitch Wright, NCM Motorsports Park’s general manager, initially thought that a BMW had appeared when he saw the car. After I dangled the keyfob in front of him and told him nobody would find out (sorry, buddy!), he got behind the wheel and flexed the Stinger GT’s muscle on the autocross pad. What that really means is that he went from one end of the asphalt to the other at WFO, drilled the brakes and went the other direction. The car hustles…you can wring the hell out of it and look like a star. The RWD version will step out if you get stupid and there’s a bit left on the table in the name of driver safety, but the look on his face after his drive said it all…very impressed.

So where does BangShift sit on the Stinger GT? That engine is a gem…it pulls from the second the turbos become involved to redline. The transmission is just about on point…every now and then the paddle-shifters aren’t as speedy as you’d hope, but we have seen much worse than these. They play along for the most part, but at 10/10ths, you’ll notice the slight delay that kicks up every now and then. The ride is going to come down to personal preference, but we appreciate that Kia stuck to the middle ground. Let the tuners and aftermarket dial up the harder-charging parts for those who like to fiddle. The body is attractive, the interior great (shifter being ignored) and it’s perfectly practical as a daily driver. You could have the 2.0L four-cylinder powered Stinger if you really want to go for the budget, but instead skip the options list, go for the baser-level Stinger GT, and do us one big favor: get over the brand name issue we’re sure many will have with this car. Kia has made a very competent sedan that will shock the hell out of plenty of vehicles on the road.

I can’t wait to read the hate mail on this one. 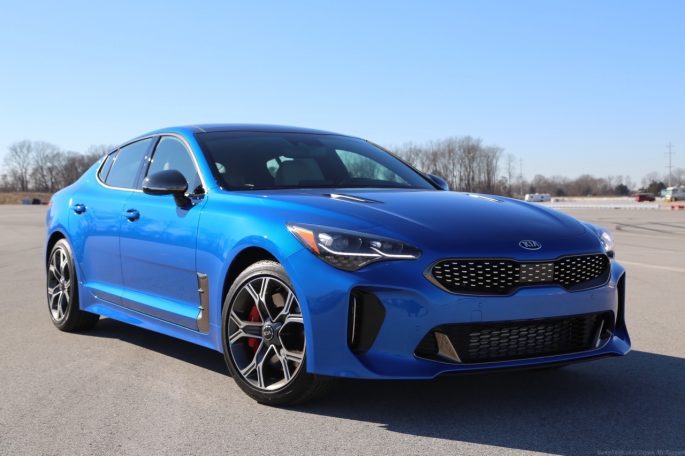 Remembering 2018 - Francois Gissy, The Frenchman Known For His Incredible Homebuilt Rockets Has Died Best of 2018: This Drift-Build Dodge Charger Is A Mutt Of American And German Engineering!