The Goodguys G/RS Camaro Is One Bad Hombre, And We Have The Pictures To Prove It 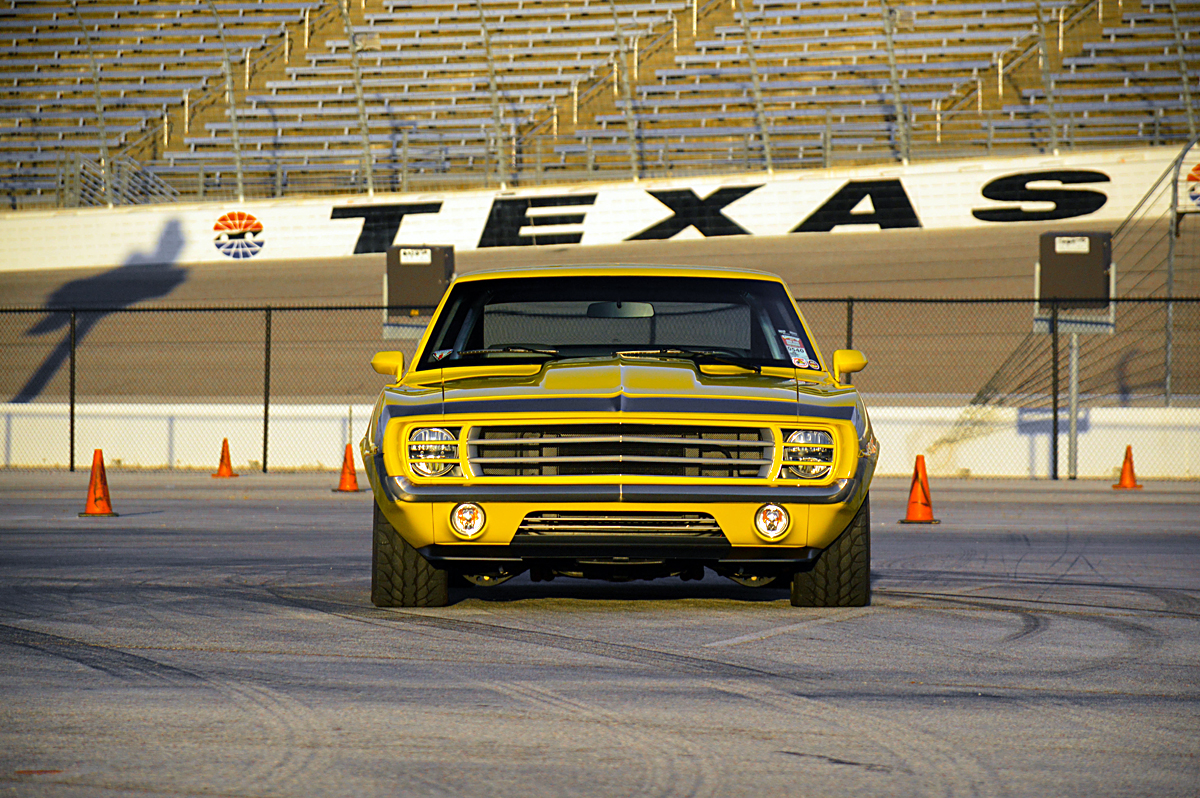 (Words and Photos by Kaleb Kelley)  At the recent Goodguys Lone Star Nationals, I had the opportunity to see some of the best builds in the country. I’m not normally a big first generation Camaro fan, only because of how common they are, but this car built by RideTech for the Goodguys Marc Meadors is immaculate. It’s pretty much a shiny, ultra-finished version of the 48-Hour Camaro race car, at a completely different level. When I first saw it I assumed that it was another LS-swapped first gen with fancy wheels. The more I looked, the more I realized I was wrong, as I couldn’t miss the amazing craftsmanship that went into this build. It’s just plain stunning.

It seems like every time GoodGuys builds a giveaway car, I get a little excited and apprehensive and day dream about what I would do if I won it. Unfortunately this one isn’t getting given away, but man I wish it was. Don’t worry though, because there is a new G/10 giveaway truck built by Scott’s Hot Rods that can be yours. But back to the Goodguys G/RS Camaro. The car isn’t just an incredibly high quality build meant to sit at a show, it’s meant to drive. Shoot, they drove it from their office in Pleasanton all the way to the Lone Star Nationals in Fort Worth, Texas. That is a heck of a drive! Everything in the car fit right and seemed like it was supposed to be there, not an afterthought. The guys at Ridetech seem to have thought of everything.

I’ve been trying to find all of the details on this car, but it seems like the more I dig the more I find, and it never seems to stop. The first thing that strikes you about the car when you walk up is the look. Certain cars have that look that makes it seem like there is no other way that the car could look better. This is one of those cars. The yellow with the titanium-finished Forgeline GA3 wheels with gigantic Baer brakes peeking through the spokes set it off. The custom molded bumpers, rear fascia, front grill, and fender gills were all built by the masters over at RideTech. You’ll notice what looks, from a distance, like just a nice gray stripe, until you get up closer. The custom Rally Sport stripe is actually in bare metal with custom G/RS logos on the side. It seems like no other stripes could possibly look even close to as good as this does. And those body lines! The crew at Ridetech must have spent a million hours getting them that sharp. How do they do that? It’s as if this car was carved from billet, rather than formed from steel. 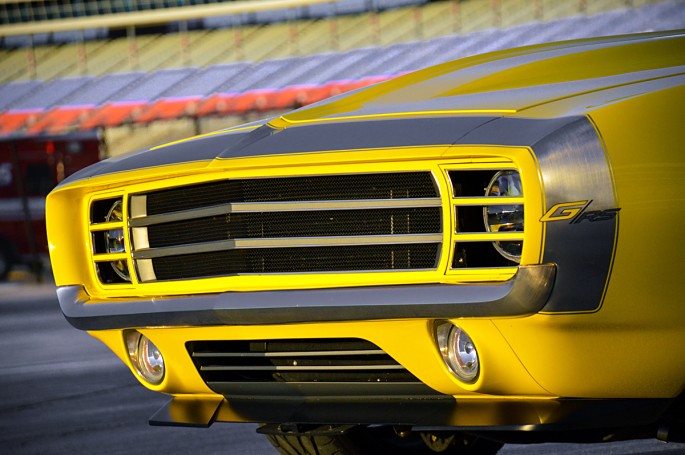 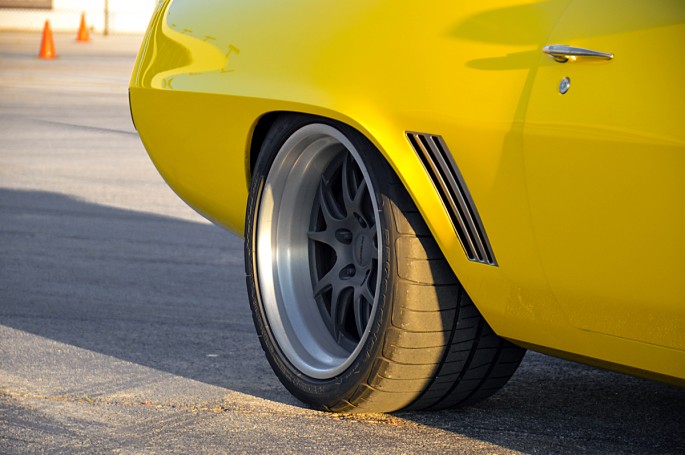 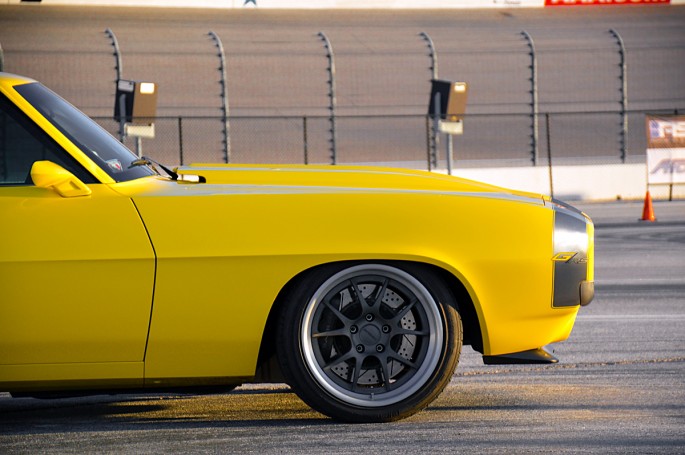 I’m trying to write this without showing my complete obsession with this car, but there is nothing I can find wrong with it. Of course what helps give the car that amazing stance that sets it all off is RideTech’s Street Challenge coilover suspension system. They told me that realistically, the suspension on this car is the same general setup as their 48-Hour Camaro that they race on the autocross track. The 48-Hour is setup much more aggressively, but it’s still funny that it has nearly the same suspension as their “race” car. Obviously the 48-Hour Camaro spends a lot of time on the street, but it probably spends just as much time on the track. And with the exception of detailing, and the fact that the bottom of the G/RS looks as nice as the top, they use the same suspension. 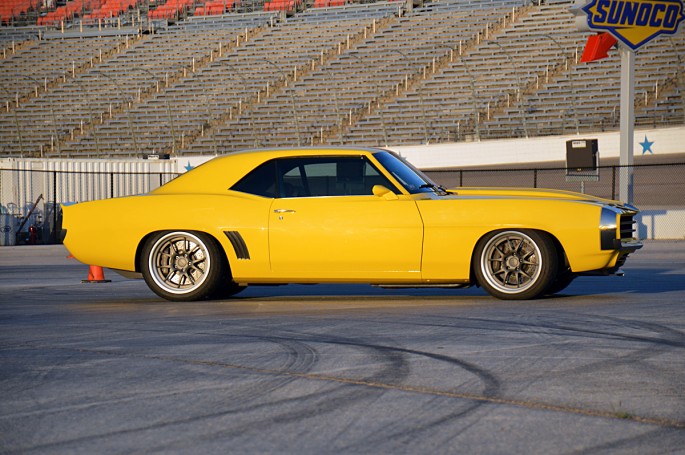 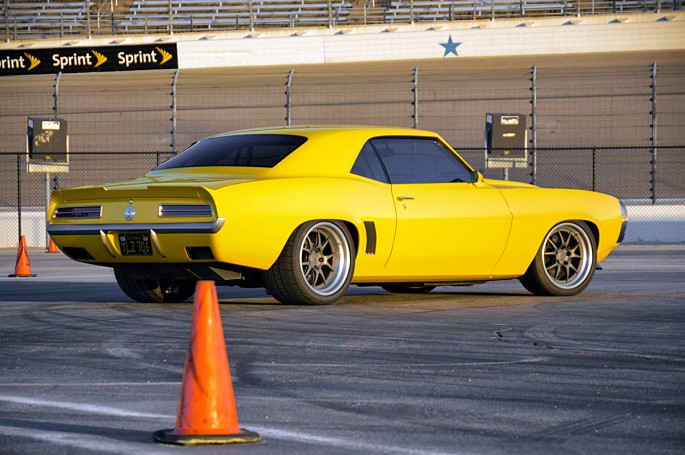 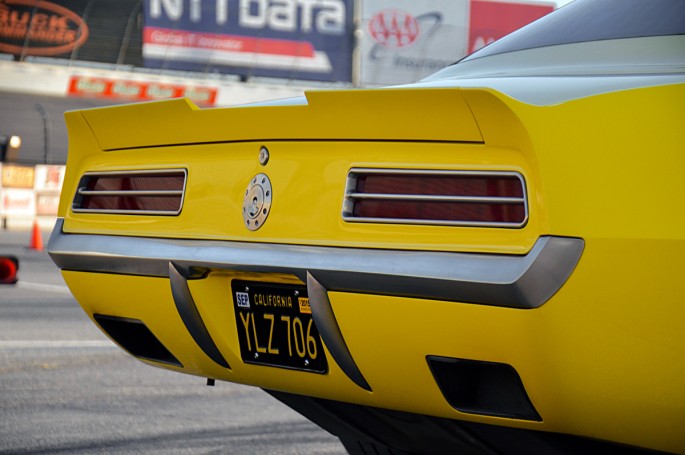 The Goodguys G/RS Camaro is powered by a 6.2L supercharged LSA straight from GM. I’ve seen a few LSA swaps, but most just leave the normal covers on and make it look like they literally picked the engine out of a new Camaro ZL1 or CTS-V and then set it in an old car, but not with this car. The guys at RideTech built custom engine covers and a shroud that just set the engine bay off and it excited me in a way that most LS engine bays don’t. My pet peeves about LS swaps are usually the coil packs and the general messiness of the swaps themselves. I’ve seen many hide the coil packs and relocate them, but not many that have retained their position and still made them look good in there. Maybe it’s a little silly to trip over something as small as a few coil packs, but it just extenuates the realization that that is a new motor under the hood of an old car. I have a lot of friends who will find any chance to dog on anything LS-swapped, but it’s hard to argue how easy it is to get power out of the LS-series motors and still maintain reliability. All of that supercharged fury is sent through, of course, a T-56 Magnum 6-speed manual transmission that is sent to a Moser rear end. Of course it has RideTech’s 4-link in the back to help get the big BF Goodrich tires to hook. 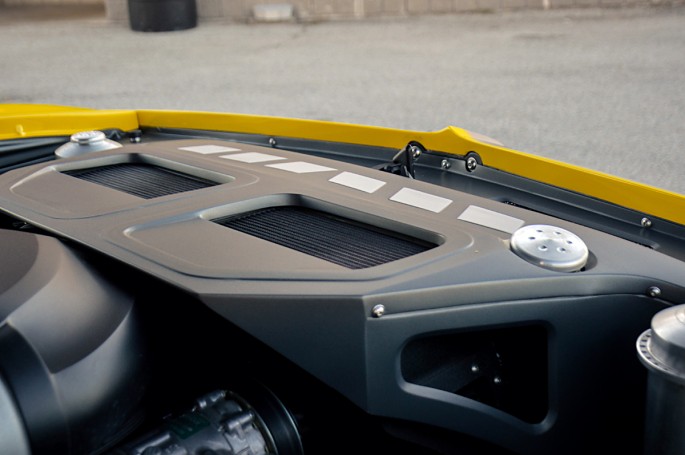 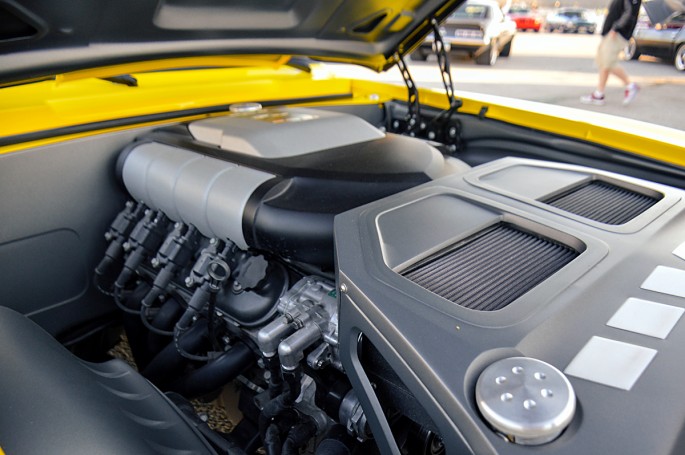 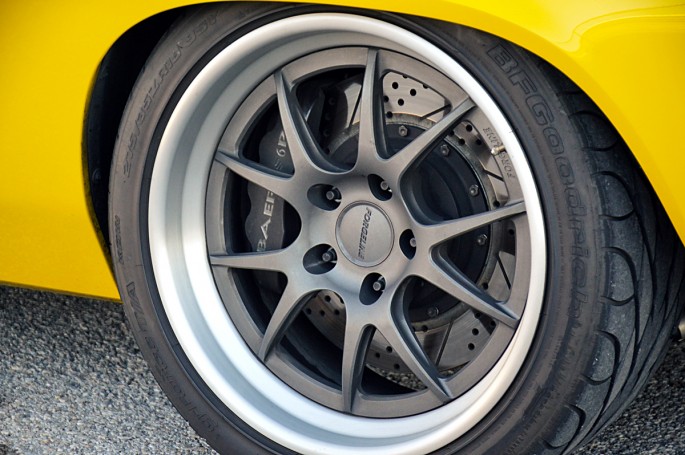 Inside is much better than I expected it to be. The Recaro seats were heavily bolstered, but almost let you forget that you were in a car that was built to go fast. One of my favorite things in the interior was RideTech’s Tiger Cage which was one of the nicest, most unobtrusive cages I’ve seen. The fact that the Tiger Cage is a bolt in system that anyone can install makes it that much more impressive. The interior was pretty functional and not showy like a lot of show cars, but man it was clean. The Vintage Air controller was so small that I didn’t notice it at first. It also had 4 buckets with a console that goes all the way through that was a really nice touch. It reminded me of the ‘66/’67 Dodge Chargers with their full length console. One funny thing on this build is the relatively unfinished trunk. Sure it’s clean and nice, but not show car AT ALL, and that’s by design. When Marc was working with the guys at Ridetech on the entire plan for the Goodguys G/RS Camaro, he specifically said he didn’t want a showy trunk that they couldn’t put luggage in. After all, it takes a fair amount of luggage to carry enough stuff for a road trip from NorCal to Texas and back. 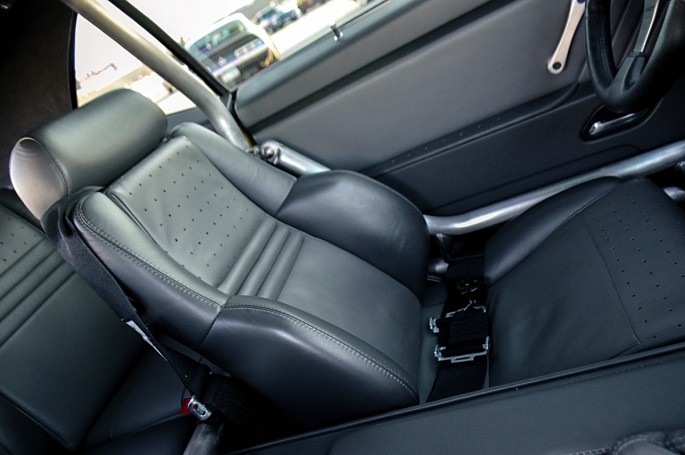 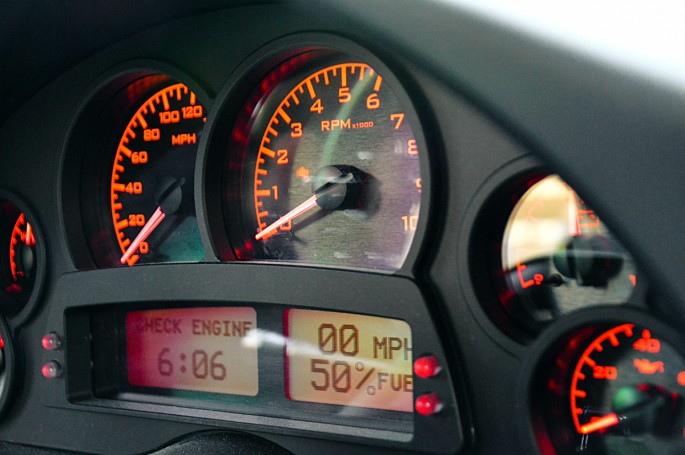 I wish I had more time to spend with the car to learn all of the hidden things that I know I missed, but you can’t know them all. The guys at RideTech really hit it out of the park with this one and I know GoodGuys is very happy with final product and hopefully it can carry on and represent the GoodGuys name well. Plans include a lot more miles on this one, both on the street and on the Goodguys autocross, so make sure you check it out at a Goodguys show near you in 2014 and 2015. You’ll see it live on forever in the Goodguys logo, as that was the purpose of this build. To make a new logo car that represents the newest generation of folks at Goodguys, now that Marc Meadors has taken over as the head of the company so that Gary, the original Goodguy, Meadors can enjoy at least some semblance of retirement. Of course for him that means spending time with his lovely wife Marilyn driving hot rods all over the place. Lucky him.

One thought on “The Goodguys G/RS Camaro Is One Bad Hombre, And We Have The Pictures To Prove It”