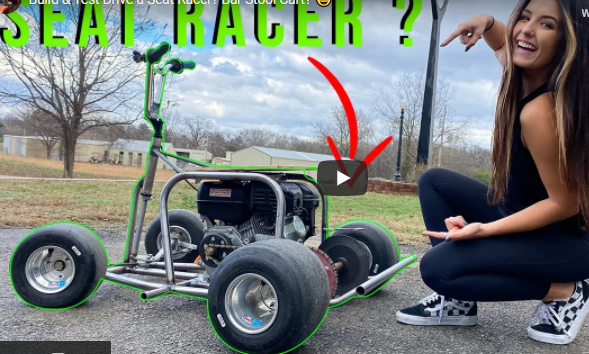 Go carts are fun. No matter how old you are there is something fun about getting on a go cart and racing your friends or just terrorizing the neighborhood. Several years ago I rode a racing barstool, think go cart with a barstool on it just like you are envisioning, all over at the Car Craft Summernationals and it was a riot. They are fun, kind of sketchy, and cool as hell. So when I saw Dennis and Alex Taylor talking about putting one together in their shop, from parts they had collected years ago, I was stoked. What they ended up building is actually even cooler, because the potential for going fast on this one is much better. Or at least better without ending up on your head.

We’re *kind of* in off season right now… not really. But we did have weekend after Thanksgiving where there wasn’t a million mile long to do list, so DT decided to pull out an 8 year old project and finish it and I decided I wanted to take you guys along for that build 😂 Within a day plus a few evenings behold a semi-finished seat racer! (?) I don’t know the proper name, because it started out as a true barstool cart racer. But, it evolved during this little mini build and I think we’re calling it a seat racer. It runs. And it drives. It has no brakes yet. But it’s something! Will it get finished and will we actually rip it around? TBD! Maybe…. Or it may sit in the corner for another 8 years lol At least the weekend was put to good use.