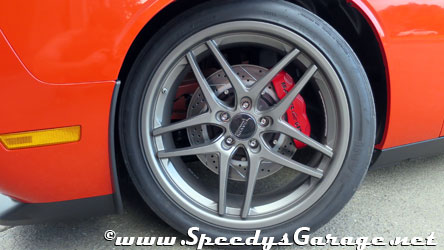 (Editor’s Note: Speedy is the man behind Speedy’s Garage and the ChallengerFest show held in Bowling Green, Kentucky. His Challenger R/T, “Orange Krush”, is a legitimate performer that we’ve seen run first-hand…it will flat-out embarrass our Angry Grandpa 300C, and that’s not a crack at ourselves, but instead a testament to how well built Speedy’s car is. He has offered to share his documented modifications and photos, the first of which is the swap to the Baer Pro Plus brake kit onto the car.) 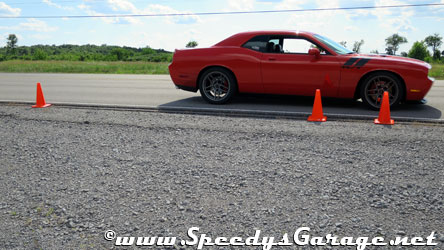 Since supercharging Orange Krush, I’ve always felt the brakes were the next real weak link. If a car accelerates fast, it shoudl stop fast, and the factory R/T brakes were starting to show their weaknesses on the street and the track. Beech Bend has two turn offs at the end of the quarter mile, and I’ve always taken the second just to give the car a bit more cool down and not have to hammer the brakes too much. Once I started hitting 128 – 130 MPH in the traps I could really feel the deficiency in the factory brake system. In searching for an upgrade, the biggest problem I ran across was finding a brake kit that would fit with just about any wheel. I didn’t want to limit myself to having to use some custom three piece, read $$$$, wheel setup. Enter Baer Brakes, who have developed a six piston caliper and fourteen inch rotor, both at all four corners, brake system that still fits with even the stock R/T twenty inch wheels. For reference the R/T factory brakes are 13.5 inches in diameter front and 12.5 inches diameter rear. The front calipers are two piston and the rears are single. The rotor thickness of the Baer rotors is also considerably more. All this adds up to some awesome brakes that can take repeated hard stops without fade. 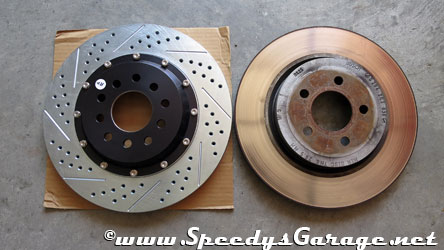 Brakes like these don’t come cheap, and I wanted to KNOW what my money bought in terms of braking performance. I went out to a closed course and did three very hard stops from 65MPH on the factory brake system, all back to back, and took accurate measurements to determine braking distance. I then did the same with the Baer system to compare. What I found was that the Baer brakes would stop the car about 45 feet shorter, if I stayed off the ABS system, and about 30 feet shorter even when ABS intervened. The Baer brakes bite much harder than fhe factory system, so avoiding ABS took much more effort. I tested this several times and if ABS was avoided the car would stop right around 100 feet over and over, the trick was avoiding ABS. The results were well worth the upgrade. Avoiding ABS with the factory brakes was easy, with the Baers you feel like your gonna go through the windshield with medium pedal input. Normal stops in traffic are little more than a toe on the brake pedal. 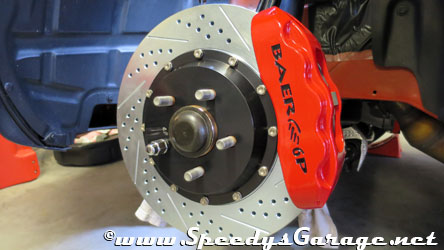 For this modification you’ll need:

For more late-model Mopar upgrades from a guy who has done it himself, be sure to check out www.speedysgarage.com!