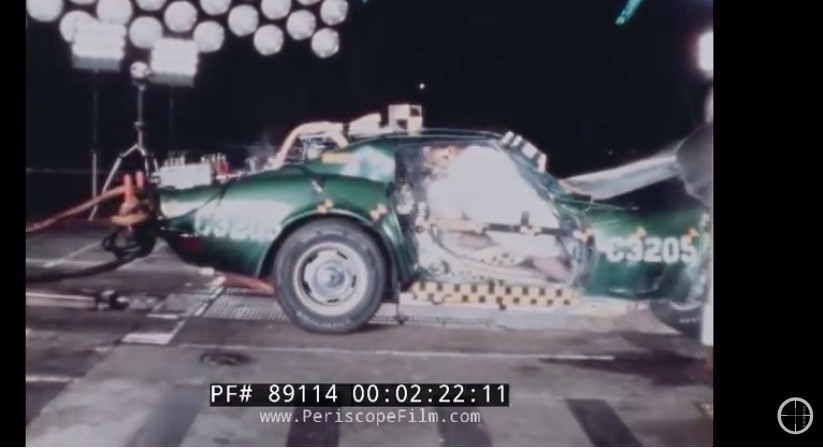 Crash testing is one of the most costly, interesting, and important factors in developing new cars. Sometimes it even he new cars that are used for crash testing as this video form Chevrolet proves out. You are about to see a C3 Corvette that has been fitted with some cutting edge technology for the period…air bags. The car is used in an offset crash style situation and as you’ll watch, the airbags do their thing, but does the car?

The video is not slated so we have no idea what year it was made in, but it looks all the world like the late 1970s or early 1980s to us. The Corvette itself is a chrome bumper car so that gives you an indication of its age. Clearly the idea was not to add airbags to the C3 platform but to test their efficacy for later inclusion into cars like the C4 and up.

If there is one interesting element that seems to fail the dummies in this crash it is the seats and the seat belts. Watch how the “driver” slides completely out of the seat and kind of just tomahawks around the passenger compartment. With no side bolstering to hold the driver in place and only a three point belt, the side impact sends him for a pretty good ride after he rebounds off of the air bag.

This is cool stuff and proof that automotive safety has been as much an evolution as performance has, even in cars like the mighty Corvette.

McLeod Workhorse Clutches Are The Ticket To Keeping Your Rig On The Street And The Trail! Wach Trailer Hitches Get Ripped From Under A Truck With Heavy Equipment!