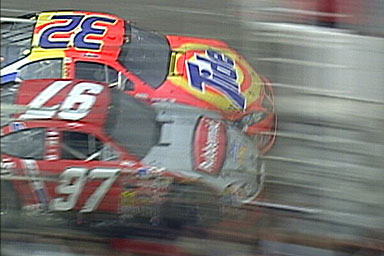 By the hair that sat on the front spoiler of his Pontiac, did Ricky Craven win the 2003 Carolina Dodge Dealers 400 race. One of the two closest NASCAR finishes ever (Clint Bowyer and Jimmie Johnson, in a four-car-wide photo finish in 2011, tied the margin of victory), the last lap battle between Craven and Busch brought back images of door-slamming, sideways NASCAR racing that many fans had considered a lost part of the sport. The cars were silhouettes racers, long past the days of actual “stock”cars, and many of the old-school drivers were out of the sport. But then there came the final battle, the one that would stand the entire crowd on their feet, and would cause commentator and former racer Darrell Waltrip to go into racer mode…listen to him on the white flag lap and you can almost see him watching the cars while picking out the right racing lines with his hands. Neither Craven’s Pontiac nor Busch’s Taurus were doing well, with Busch fighting a failing power steering pump and both cars getting loose. On the second-to-last lap, Craven tried to pass in Turn One and things didn’t go well for either driver, with Busch slapping the wall and Craven getting loose enough for Busch to recover and walk away. The last lap has since become NASCAR legend, with Craven trying for a move in Turn 3 and the last run turning into a side-by-side run with both cars rubbing through the finish line. The margin of victory was .002 seconds, the closest recorded margin of victory recorded since NASCAR switched to electronic timing in 1993.

If You Can't Be Good, Make It Look Good: This Ford Falcon XW Goes For The Sky At Sydney! This Compilation Of High-Speed Vehicle Crash Testing Is Brutal! One Car Into Another At 200 KM/H!