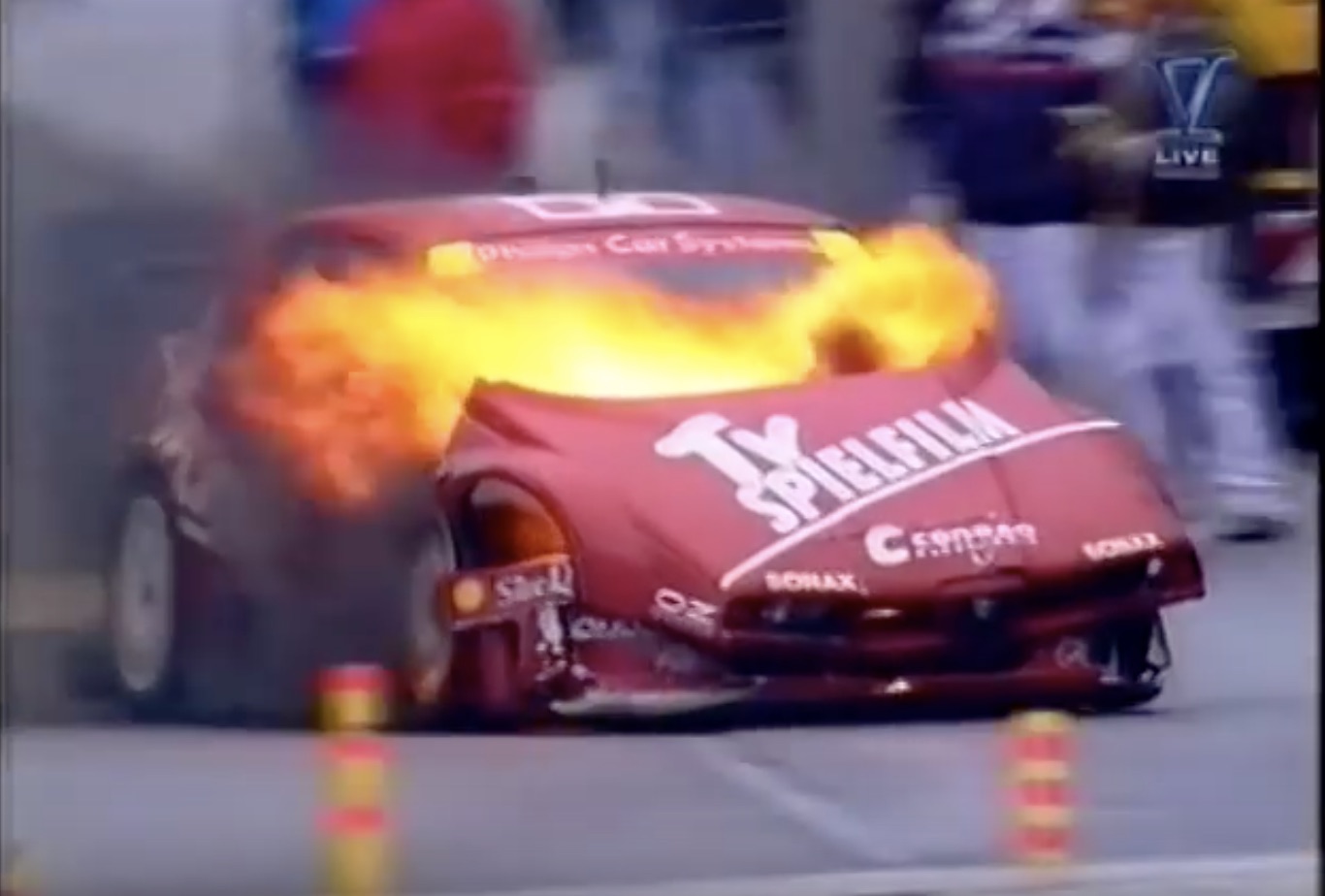 Passion is a strange thing. It will drive you to commit actions that are irrational, ill-advised, and just plain questionable. They’ll seem right at the time, and in the heart, they probably are right. But best of luck convincing anyone else who witnessed the act of the validity of your choices. Passion makes young teenage males do absolutely stupid stuff because a female they like might be looking. Passion will turn the docile into a demon, give courage to the coward. Consider it emotional adrenaline, if you will. If there is no passion, there is no point, right?

Alessandro Nannini had passion in his heart during the 1994 DTM race at Alemannenring. In the first race, he had stuffed his Alfa Romeo 155 V6 Ti into a tire barrier and his chances at a potential DTM championship were in peril. This wasn’t just a racer looking to notch his belt with an overall championship, either…the Alfa Corse team was all about taking a fight to the Germans in the Germans’ racing series. 1993 saw Alfa driver Nicola Larini take the championship. They weren’t the only ones that dared to tread against the Germans, mind you…three teams entered Fox Body-era Ford Mustangs into competition that year…but Alfa was a sincere threat to Mercedes, the main rival. Nannini was in the chase by a thread, but if he could overtake Mercedes driver Klaus Ludwig and place on the podium, there was hope. That meant that he got team driver Giorgio Francia’s Alfa Romeo and started at the back of the pack for the second race of the event. In short order, thanks to skill and a bit of luck, Nannini had clawed his way back to fourth place. So long as he finished in fifth, he was good. But with five laps to go, in a moment that will invoke all sorts of arguments for years to come, Mercedes driver Roland Asch thumped the 155 around in a hairpin corner, putting the Alfa nose-first into the barriers as everyone drove around.

Nannini was seeing red mist. Passion is a funny thing…it works both in the positive and the negative. And after being spun in a corner and realizing that the Mercedes driver had gotten away with it, passion made a switch in Nannini’s emotions. After trying to get the track marshals to do something and getting nothing in return, he made the choice. He got the Alfa going again and hauled ass to his pits. He had four tires put onto the car and went screaming back out onto the track. Within two laps, the headlights of Nannini’s Alfa were aimed at the back of Asch’s Mercedes C-class, and when Asch slowed down for a corner, Nannini didn’t. He shoved Asch’s car clean through the corner onto a runoff, ending his chances at a championship run as well. As if to drive the point home, as Nannini drove the bashed Alfa back to the pits, the engine bay erupted into flame and stayed that way as Nannini exited stage left. He would wind up taking fourth in the points for 1994, with Klaus Ludwig claiming victory in the end.

Best of 2019: Katech Made Nearly 1,500hp With Their Stock Bottom End LT5 Before They Called it Quits Best of 2019: Listen To A BRM V16 Scream Up The Hill At Goodwood, Best Sounding (Non-Nitro Burning) Race Engine Ever