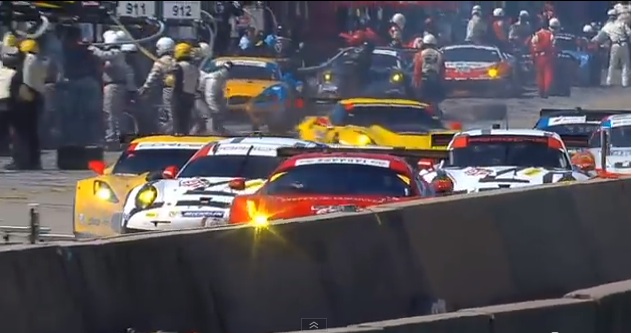 The 2014 Petit Le Mans had plenty of action going for it in all of the classes, from the DeltaWing cars through the GT classes. While there was plenty of carnage throughout the race, one of the most unbelievable incidents happened at pit lane, of all places, taking out a GTLM Ferrari and causing damage to a GTLM Corvette and GTLM Porsche. Ferrari driver Pierre Kaffer was exiting pit lane when Patrick Pilet, driving the Porsche, rear-ended him hard. Pilet was then hit by Jan Magnussen in the Corvette.  Kaffer had been in the Ferrari, but Pilet and Magnussen had just entered their cars and were going through the normal checks and procedures (read: looking elsewhere than straight ahead) when the red light turned Kaffer’s Ferrari into a very expensive crash test wall.

Kaffer was forced to retire the Ferrari due to right-rear suspension damage and steering issues. Magnussen had to return to fix damage and lost four laps in the process, while Pilet, who was sandwiched between the two cars, made two stops under yellow for repairs and managed to not lose any laps.

One thought on “Crash Video: The Pit Lane Incident At The 2014 Petit Le Mans At Road Atlanta”