Curb Your Enthusiasm: Watch As A V8 Ute Racer Performs The Mother Of All Jump-Starts!

Jul 04, 2020Bryan McTaggartApex Video, BangShift APEXComments Off on Curb Your Enthusiasm: Watch As A V8 Ute Racer Performs The Mother Of All Jump-Starts! 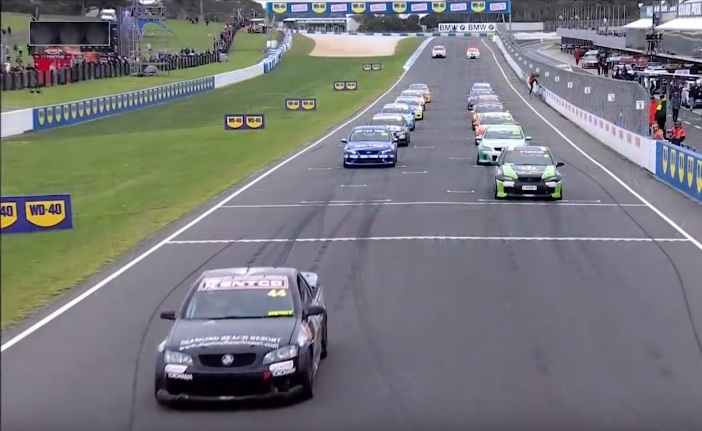 The final few seconds before the start of a race has to be intense for a professional racer, don’t you think? The start is crucial for racers, no matter where they qualified: if you’re in the front, your launch has to be good enough to maintain your leading position. If you’re in the back, you want to use the start to catapult your way forward past drivers who didn’t do so well. And nobody wants to be the guy who stalls out on the starting line. V8 Ute driver Richard Mork certainly didn’t want to be “that guy”,  but at the Philip Island race recently he might have cracked under the pressure. Nobody was ready for what happened…the drivers in the field are performing the last-second checks and gearing down for the launch and the announcers are winding up for the green flag when out of nowhere, the unmistakeable sound of a highly-powered V8 car spinning it’s tires off of the launch break into the conversation. You know the race is off to an interesting start when one car is hauling ass from the starting line, the rest of the pack are sitting at the line with a bunch of drivers in unquestionable shock, and the announcer is reduced to “What…on….earth…just happened?!” Mork wound up with a six-second lead over the pack before first having his finishing time smacked by five seconds, then being forced to take a drive-through penalty, which reportedly put him at second-to-last finishing position. In his defense, Mork claimed that his foot slipped off of the clutch and he just went with it so that he wasn’t in everybody’s way…a smart move, especially since one of the most historic V8 Supercar crashes ever was when Karl Reindler’s Holden stalled out and was struck from behind, creating one of the most horrific fireballs ever seen in racing. We’d want to be out of the way of traffic, too…but from where we sit, it looks like he realized that he might have gotten away with the jump and was hoping that he’d only be dinged for five seconds for the head start!