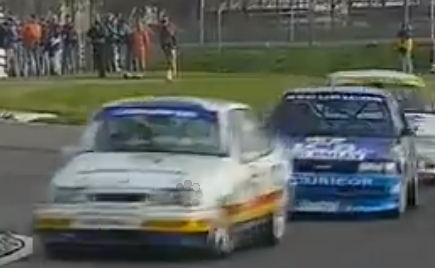 While there is no denying that we love our drag racing here at BangShift, we have road racing in our past and still carry an affinity for that type of racing. We were tipped off to this five minutes of awesome footage by BangShift reader Ollie. The video is from the 1992 British Touring Car Championship and was taken at the last race of the season at the Silverstone track in England. All the marbles are on the line and the men leading the pack are driving their asses off.

What elevates this clip is the intensity of the racing, the motioning of the drivers inside their cars, the announcer, who is masterful in his call of this event, and how the whole thing ends up. Watch for the drivers to be pointing, waving, flipping one another off, and generally taking the kinds of insane risks that the last race of the season and championship hopes bring.

Thanks for the tip Ollie!