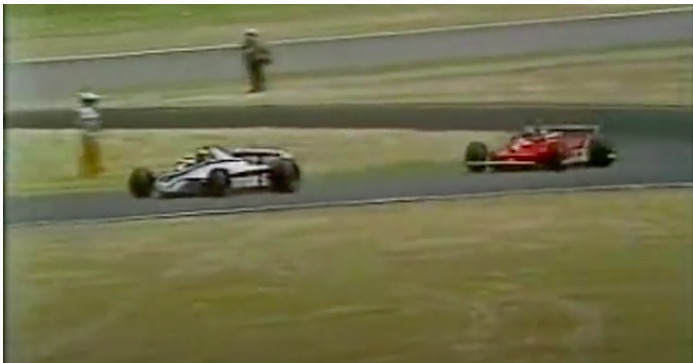 This right here is one of the most stark examples of how much Formula One racing has changed over the years. When you see the legendary Gilles Villeneuve drive like a man who is fully possessed by the devil in this video and then consider what would happen to a modern F1 car and a modern F1 driver id they took the same approach at a race today it’s hard to believe you’re watching the same sport. Villeneuve would unfortunately pass away two years after this video was made during the 1982 campaign. His legacy still looms large and his son Jacques avenged his dad’s memory by becoming an F1 champion himself in the late 1990s. But we digress.

Driving for Ferrari where he had been since 1978, you are going to see a guy battle the track and his competitors as well as the handling proclivities of his own race car here. No, it does not end in glory but it ends in a way that is utterly perfect for the context of the moment. The joke about today’s F1 racing is that it is basically a glorified parade after qualifying. There’s not enough passing, the cars are as fragile as a China vase, and if someone looks at them sideways they are broken with carbon fibers bits flying off. Not these things.

The cars of this era were build to hand a lot of abuse and that’s even more reason to be jaw agape when you see Villeneuve’s less than graceful exit from competition here. Listen to Murray Walker and James Hunt call the action and check out these highlights from a Herculean driving performance!