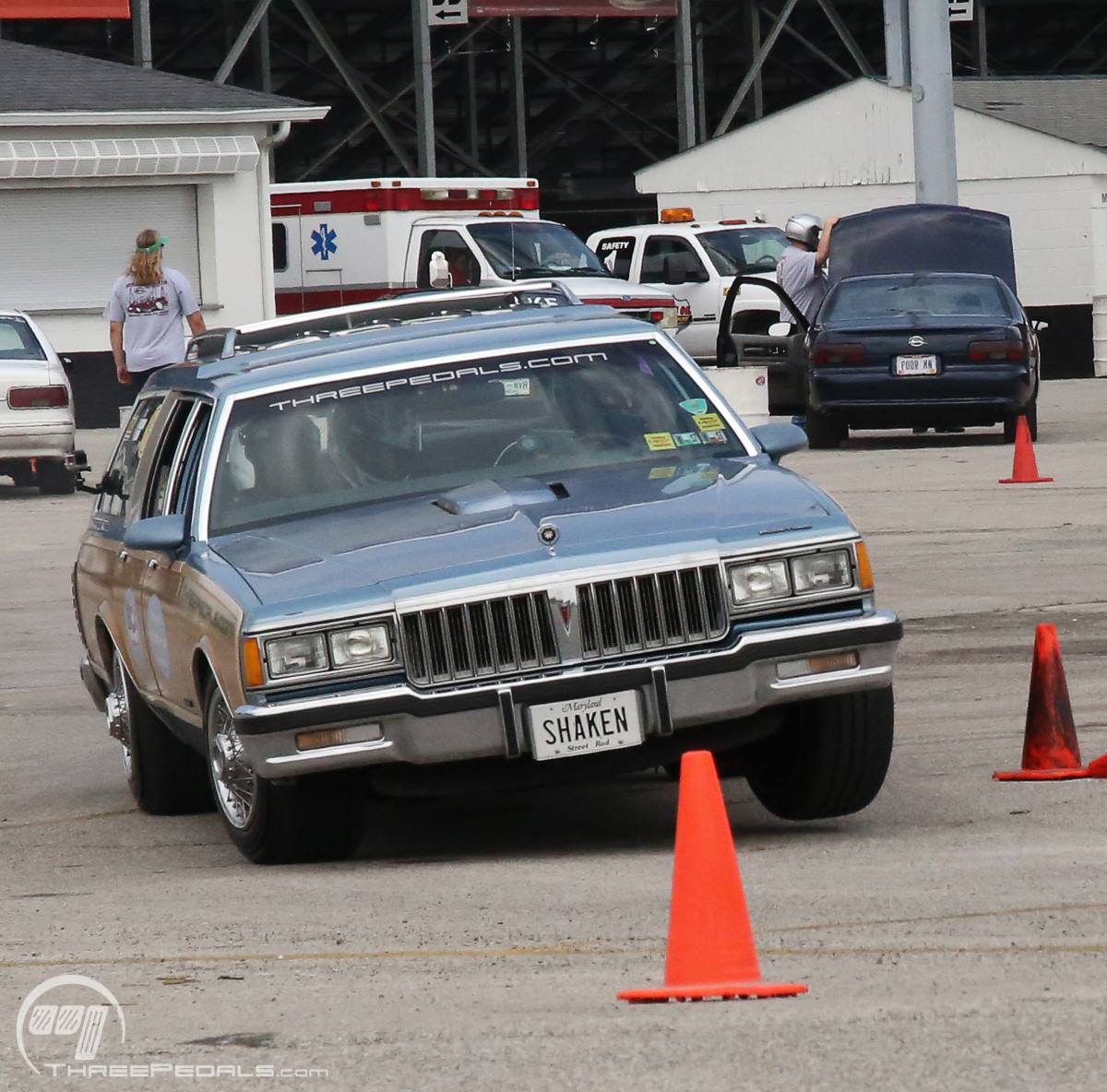 (Lead photo: Three Pedals) What do you have to do to prove to any and everyone in attendance at a show like the 2017 Car Craft Summer Nationals that the product you make is the product that they should be looking at to buy? Demonstration testing, and not in a gentle manner, that’s for sure. You’re in a field of car freaks…they want to know that what you are selling will hold up to whatever abuse they can throw at it without so much as a whimper, over and over, until the rest of the vehicle falls apart around it. That’s proof that your engineering is up to the task and that their hard-earned dollars won’t be in vain. 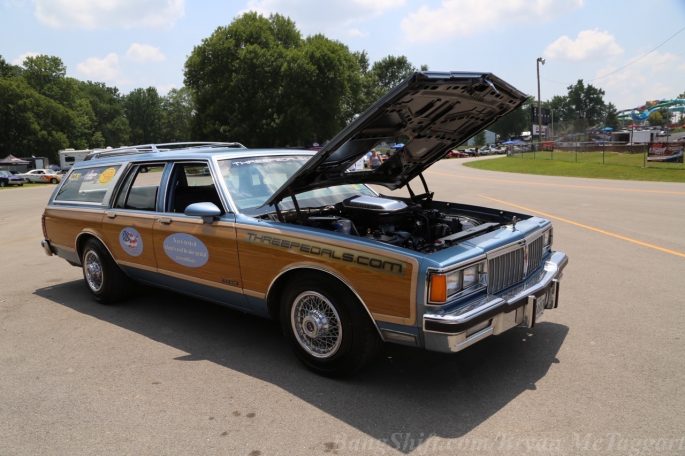 We first met Three Pedals and their 1989 Pontiac Safari station wagon, “Shaken and Stirred” at the 2016 Holley LS Fest. All three of us couldn’t help but notice the big Poncho wagon with the T/A shaker scoop, well-faked wheel and tire setup that uses the classic locking wire hubcaps mounted onto gigantic steamrollers, and of course, the car’s reason for existence in the first place, the row yer own box. Originally a well-sorted 307-powered machine, it’s now packing an LS3 with a Mast Motorsports cam and M90 ECU. The Safari barks through a three-inch dual exhaust, and the trans is a Tremec T56 Magnum with a Hays Dragon Claw clutch. 4.10 gears out back move the big wagon, and the wheels are 20″ Deluxe Wheels units that can take a 15″ hubcap, for the right look. 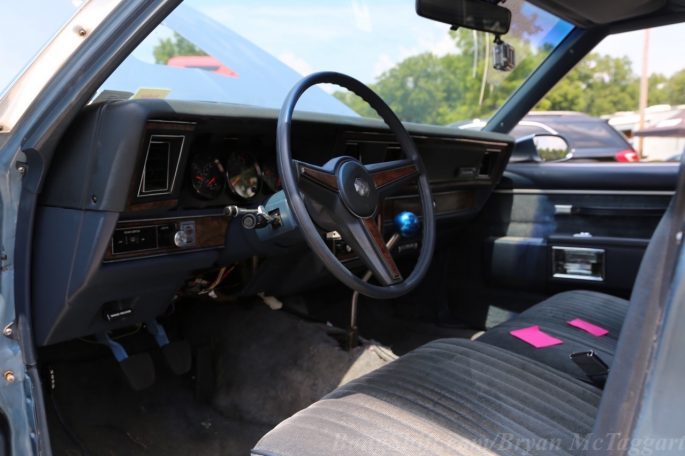 For just about the full duration of the Summer Nationals, Josh Korsower, the man behind Three Pedals, spent about every possible moment absolutely wailing on the car in the rather tight autocross course. The big blue beast sounded monstrous and I couldn’t help myself, so I jumped in and rode along for a lap:

There is no faking that kind of reaction, folks. The car not only launched me side to side like a rag doll, but managed to rip the hat off of my head and throw it into the backseat by G-forces alone. But what I wish I had done was leave the camera on for a couple of seconds more, because the next sentence out of Josh’s mouth was a stunner: Would I like to run the car through the course?

…”would I like to autocross this LS-swapped, six speed station wagon”. Does a bear…nevermind, you know the answer.

I wasn’t up to Korsower’s pace on the track, but there is nothing…absolutely nothing…like dumping the clutch in that car and feeling the back end sink down as the massive rear tires hunt for grip. The throttle is an on-off switch for traction…touch it, and traction in the corners goes bye-bye and the Safari becomes an impromptu drift machine. The brakes clamp down like a proper track-day car should and while there’s rolling and pitching, it’s not as violent overall as you’d think. (The video movements are a combination of Korsower kicking the car in the ass and a bench seat that has all the gripping power of wax paper.)

They ran the Safari hard…hard enough to cause the clutch to have issues. So they left the show and went to Holley to do some repair work. The next time I saw the Safari, it was pulling into the lanes for some test passes on the dragstrip. Build, break and rebuild as necessary, all in a station wagon. Suddenly, that itch for a glasshouse B-body coupe is coming on strong… 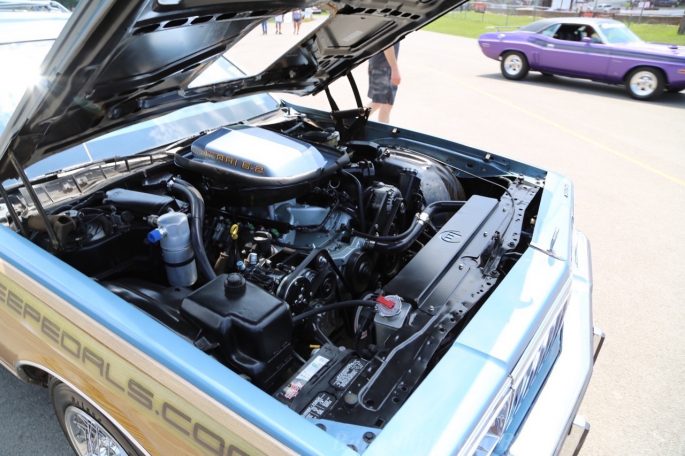 Incredible Video: Driver Loses Brakes At Sebring - Smashes Fence, Dodges Traffic, Ends Up At Hotel, Drives Back Into Track! Weirdest Tow Truck Video Ever: Watch A Motorcycle Get Speared Into The Back Of An Acura - What?!

One thought on “Hauling In Style: Three Pedals’ “Shaken And Stirred” 1989 Pontiac Safari Rules All!”