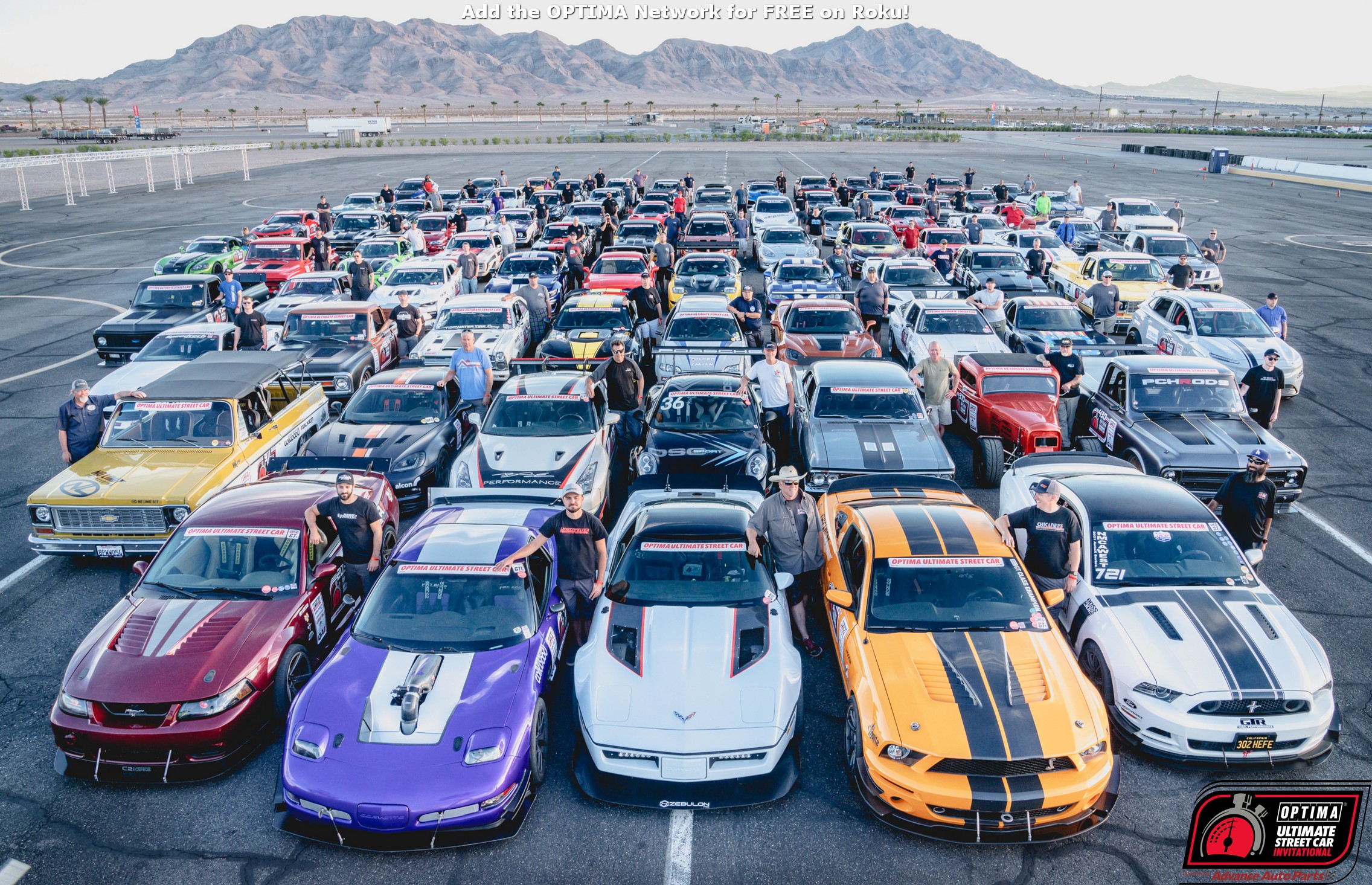 CB Ramey’s 1987 Corvette won the 2020 OPTIMA Ultimate Street Car Invitational (OUSCI), presented by Advance Auto Parts, by a single point. Each position on the track is worth one point in three different timed disciplines and the margin is often measured in thousandths of a second and fractions of an inch.

One might question why we’d lead a story about OPTIMA’s 2021 OUSCI, by delivering year-old news, but the perspective here is important. There are other racing series that couldn’t manufacture a finish as close as Ramey’s victory in 2020 and with MAVTV camera crews documenting all the action, runner-up, Jake Rozelle, was constantly reminded that his 2003 Corvette was on the losing end of that razor-thin margin.

Rozelle took it all in stride and renewed his commitment to do everything in his power to be on the winning end of things in 2021. He repeated as the Holley EFI GTL class champion during the regular season and accumulated more points than anyone else (1,484 out of a possible 1,500) on his way to a second regular season Grand Champion title.

On the other hand, Ramey stumbled badly throughout the year. He made major changes to his C4 Corvette, including weight reduction that moved him out of the Classic Car Liquidators GTV Class and into the Holley EFI GTL class. He tried and failed multiple times during the regular season, to put together a decent run at an event. His 2020 championship gave him an automatic invitation to defend his title the following year, but the qualifying series still serves an important purpose of allowing competitors to shake down their cars and make any changes needed, before heading to Las Vegas for the SEMA Show and the OUSCI.

It wasn’t until the final qualifying event of the year, that Ramey managed to put together a run over 490 points (500 is a perfect score on a weekend), a feat Rozelle had already accomplished four times by that point. Still, Ramey’s run in Kentucky seemed to indicate he had his C4 ready for action in Las Vegas and Rozelle would leave nothing to chance.

For the first time in the history of the OUSCI, one of the timed driving segments, the Peak Performance Challenge, was actually held at the SEMA Show, in the Bronze lot, next to the South exhibit hall. No one knew how spectators would react and the Peak Performance Challenge is a relatively-unique event in motorsports, that tests a vehicle’s ability to accelerate on an un-prepped surface and stop within the confines of a 20×40 stop box.

It didn’t take long for the motorsports-savvy crowd to latch onto what was transpiring, as car after car slid into the stop box, enveloped in a cloud of tire smoke. These weren’t just beat-on drift cars burning up tires tucked under zip-tied bumpers either. These were some of the absolute best examples of show cars anyone would find anywhere at the SEMA Show.

Two-time OUSCI champion, Mike DuSold, provided live commentary on a PA system, to fill in the blanks and help the audience understand how critical every run was for these competitors. The smoke and noise drew in spectators by the thousands and the pressure mounted for competitors, who were not accustomed to having such a large gallery of engaged observers.

The AWD/ABS cars shined in this segment, as they often do, but it was just the beginning and for Ramey & Rozelle, with their attention clearly focused on their performance relative to the other. Ramey finished sixth and Rozelle finished fifth, giving Rozelle a one-point advantage. The next segment was the Lucas Oil Road Rally, which was worth 100 points to every competitor who completed it. As it does every year, that segment claimed several cars that were hurt after the Peak Performance Challenge and unable to make the drive on public roads to Las Vegas Motor Speedway.

Once there, competitors lined up for the QA1 Autocross on Saturday. Ramey took the win in that segment and with Jordan Priestley’s 2021 Tesla Model 3 finishing just ahead of Rozelle in second place, Jake’s one-point lead turned into a one-point deficit. Results from the Lingenfelter Design & Engineering Challenge would be posted during the lunch break on Sunday, but not before the morning sessions of the Falken Tire Road Course Time Trial.

Braking issues plagued Ramey all morning and only one of the morning sessions was run without black or red flags being flown. Rozelle’s Corvette ran flawlessly and posted fast time of the morning, but in the final session before lunch, Ramey got on the board with top-10 run of his own. When the results from Design & Engineering were posted during the lunch hour, Ramey was listed as the overall winner, with Rozelle finishing at a five-point deficit in that segment.

Rozelle was already at the top of the road course standings and could accumulate no more points. With Design & Engineering results serving as the tiebreaker, some quick math told Rozelle he needed four cars to get around Ramey in the afternoon sessions, in order to capture the OUSCI title and that was only if Ramey couldn’t run any faster in the afternoon. Given Ramey’s prowess on the road course, that seemed like an unlikely scenario and Rozelle was once again looking at another OUSCI defeat by the slimmest of margins.

The fastest cars on the Falken Tire Road Course typically come out of the GTL and GTS classes, but several of the cars closest to passing Ramey were GT class cars, which seemed less likely to happen. Even if Dave Schotz’s Camaro and Jonathan Blevins’ Mustang got around Ramey, that would still put Rozelle’s Corvette in a tie with Ramey’s, with the tiebreaker going to Ramey.

However, as the afternoon run sessions wore on, the cars chasing Rozelle for the top spot and passing Ramey in the process began to grow. Michael Levitas’ Porsche GT2RS and Bob Sobey’s Nissan GT-R were soon joined by Michael Rovere’s Corvette and Schotz’s Camaro. Ramey’s lead was evaporating and with an unreliable brake system, there was little he could do about it.

Coming into the final run group of the day, Ramey clung to a one-point lead over Rozelle and history looked as if it would repeat itself again, but a strange thing happened on the way to the podium. Clayton Yates’ Camaro and Jonathan Blevins’ Mustang both found the speed they needed to get around Ramey in that final session and Rozelle’s championship was delivered on the same one-point platter that served up Ramey’s title in 2020.

Hollywood couldn’t have made a more dramatic ending and the emotion was obvious in both, as Ramey handed off the trophy to Rozelle. For an event that saw more than 90 entries spanning 90 years of production vehicles, it all came down to one point, decided by a fraction of a second or a glancing blow to a cone. The competition is that tight and the outcome that unpredictable. If you weren’t there to watch it all unfold in person, be sure to catch the TV series every Friday night at 8PM ET/PT on MAVTV.

The 2021 schedule will be announced soon and registration will open next month at www.DriveOPTIMA.com