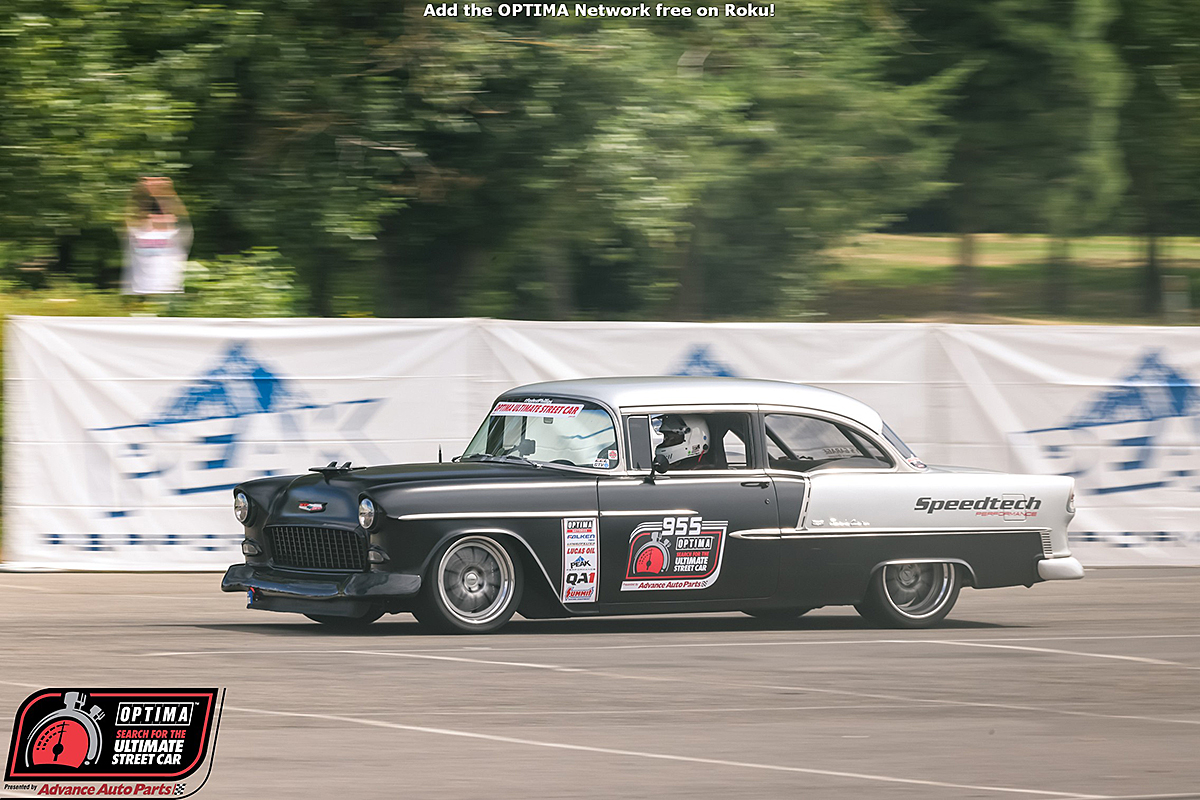 
Four of seven events are now in the books in OPTIMA’s 2022 Search for the Ultimate Street Car, presented by Advance Auto Parts. The next two stops are the last qualifying events of the regular season before the series heads to the SEMA Show in Las Vegas for the OPTIMA Ultimate Street Car Invitational (OUSCI).

The 2022 schedule saw two qualifying events out West and two back East for the start of the season, so with the conclusion of the most recent stop at Portland International Raceway, leaders are emerging in each of the classes, as well as top contenders for points invitations to the 2022 SEMA Show and OUSCI. While competitors can win their way in, by winning their class at a qualifying event or being the top-finishing non-qualifier (if the winner already has an invitation), there are two other paths to Las Vegas.

Once the qualifying events conclude, the top-three non-qualifiers from each class will receive an invitation to Las Vegas, based on their best two performances of the season. Once those invitations are handed out, ten more at-large entries will be handed out, regardless of class, to the top non-qualifiers from the series. Before we get into how that race is shaping up, let’s take a look at who has emerged as the cars to beat in pursuit of regular season class championships, starting with the Speedtech Lucky 7 Outlaw Class.

Since the Speedtech Lucky 7 Outlaw Cup competitors do not compete for the OUSCI title, but for the regular season championship and class cup in Las Vegas, they do not take points or positions away from competitors in the other classes. Since they also do not participate in the Lingenfelter Design & Engineering Challenge, a perfect score on their weekend is 400 points and as the name suggests, only seven of these Outlaw competitors will be invited to Las Vegas, based on their best two performances at the six qualifying events.

Duke Langley’s ’02 Corvette scored a perfect 400 at Portland International Raceway, but he needs to run a second event to qualify for Las Vegas or compete for the regular season championship. He indicated he is likely to do that, but if he doesn’t, current Outlaw Class points leader, John Lawrence, is likely to win the regular season championship and is certainly a lock for an invitation to Vegas. Based on the current registered fields, Anthony Palladino & Josh Stahl have also secured invitations to Las Vegas and Colton Nixon & Jeremy Salenius could as well, depending on how they do in the final two qualifying events.

There is far more uncertainty once we move into the other classes, starting with the Classic Car Liquidators GTV Class, where defending class champion, Jason Bottenfield, has a fight on his hands with fellow ’69 Camaro driver, Ryan Breezee. Breezee’s Camaro moved into the top spot by eight points over Bottenfield, after scoring his second win of the season at Portland. He is not scheduled to run in any more events at this time, but Bottenfield will have two more chances to reel him in. What will it take for Bottenfield? A score of 467 points at either of the final two events, just a single point more than he scored at Portland.

Forecasting the outcome of the final two events, we would predict the Camaros of Chris Smith & Brian Hobaugh would win the class invitations at the final two qualifying events. That could set up Tom Farrington’s Chevelle, Jim Stehlin’s Camaro and Kyle Phillips’ Bel Air to receive the three class invitations to Las Vegas (we’ll share the at-large invitations later in this article). These predictions (and all the other class predictions) are by no means settled science either, just estimates. For instance, we have Farrington ending up with 832 points (he has 829 now), Stehlin with 818 points (804) and Kyle Phillips with the 780 (772). Just beyond those three, we’d predict Bret Madsen to finish with 772, Frankie Trutanic at 768 and Paul Bulski at 766 and all three of those drivers have not yet run their second event.

There’s also quite a battle brewing in the No-Limit Engineering GTT Class for trucks, where Stephen Dorrick’s wild, all-wheel drive, LS-swapped Nissan Frontier currently leads David Carroll’s ’74 Blazer by 14 points. Not only are those two scheduled to run again, but every truck currently in the top-10 is scheduled to run again, except Brian Finch’s ’70 C10. Scott Maeyaert, who currently sits 10th is the only one registered for both of the final qualifying events.

If the final two events play out how we think they might, Maeyaert and Josh Wojciechowski could grab the final two qualifier invitations, while Hondo Miller, Henry Crawn and Wesley McFarland would pick up the three class invitations. However, if Rob White’s ’04 SRT-10 turns in a performance in Utah that aligns more with his finish at Portland, he could move into one of those spots and the same is true of Kyle Sepulveda’s ’66 C-10 and Jeff Glowniak’s ’72 F100, which both struggled at Sonoma earlier this season.

The GTS Class for late-model sports cars and all-wheel drive vehicles over 3,200 pounds looks like it will be capturing the most invitations to SEMA and the OUSCI this season, once the points chase plays out. We would predict Richard Forsythe’s Corvette and Jordan Priestley’s Tesla Model 3 could capture the class invitations at the final qualifying events, which could put Andy Voelkel’s C8, Thomas Marquez’s Impreza and Nate McKeever’s Corvette in position to grab the final three class invitations. There are several other GTS competitors who look like they could finish close to those three and could grab five or more of the ten at-large invitations.

In the Holley EFI GTL Class, 2020 OUSCI champion, CB Ramey’s C4 Corvette has opened up a sizable lead over Garry Walsh’s C5 Corvette. Walsh has already turned down an OUSCI invite this season, due to family commitments, which means the invitation coming from the VIR qualifier could end up with Ryan Mathews’ Corvette, while Angela Barnhouse’s S2000 could grab the invitation from Utah. If that happens, Bryce Hungerford’s Corvette, Kong Chang’s RX-7 and Cary Hegna’s Corvette could grab the three class invitations.

In the Geaux Moto GTC Class, Doug Wind’s ’04 SRT-4 has built a rather sizable lead over Dayton de la Houssaye’s ’06 Mazda MX-5, but there is much to be settled in the final two events. John Laughlin’s ’07 Honda S2000 was dinged up at Charlotte and struggled at Road America, but is still in position to pull off a championship run at VIR. Behind Laughlin, de le Houssaye will need to decide if he wants to try to qualify one of the other Miatas in his stable, while Matt Davis makes a similar attempt with his ’04 Pontiac Vibe, after grabbing an invitation in Portland with his ’21 MX-5.

If James Garfield’s ’21 Civic Type-R picks up the class invitation at VIR and Davis picks it up at Utah, the three class invitations would likely end up with Saroja Day’s MX-5, Ryan Ellsworth’s ’79 RX-7 and either Sammy Valafar’s ’00 Miata or one of de le Houssaye’s other MX-5s.

The GT Class is tied with the GTS Class for the second-largest field of the season so far, with 36 cars having already competed, all of them chasing three-time and defending class champion, Jonathan Blevins’ ’08 Shelby GT500. Blevins currently leads Matt Ramirez’s ’04 Mustang by nine points and is scheduled to run one more time at VIR. After that, he’ll look to see if either Ramirez or Dave Schotz’s ’20 Camaro can find a way around him at the regular season finale. Both cars are certainly capable and . Beyond those three front-runners, we predict James Thomas’ ’16 Shelby GT350 and Matt Ales’ ’11 BMW M3 could grab the final two qualifying spots. If they do that, it could set up Luke Vigneault’s ’11 Challenger, Jesse Shaffer’s ’15 Chevrolet SS and Mike Maier’s ’17 Mustang for the three class invitations, but that competition is very tight. The Camaros of Dave Dash and Jake Jackson, as well as the Mustang of Colton Johnson could easily replace any or all of those cars for GT class invitations.

Beyond those predictions, we’ll take a look at which cars could potentially grab the final ten at-large invitations. Once again, we remind readers there are two qualifying events left and these are only estimates, which could change dramatically, depending on who runs in the final two events and how their cars perform.

With those predictions in place, who is predicted to be on the cusp of making into the field? Here’s our predictions for the first five out:

Be sure to check out OPTIMA’s Search for the Ultimate Street Car TV series, every Friday night at 8PM ET/PT on MAVTV. You can see a preview of some of the cars that will be featured in the gallery from the Portland event below. Learn more about how you can compete in this series in your street car at www.DriveOPTIMA.com