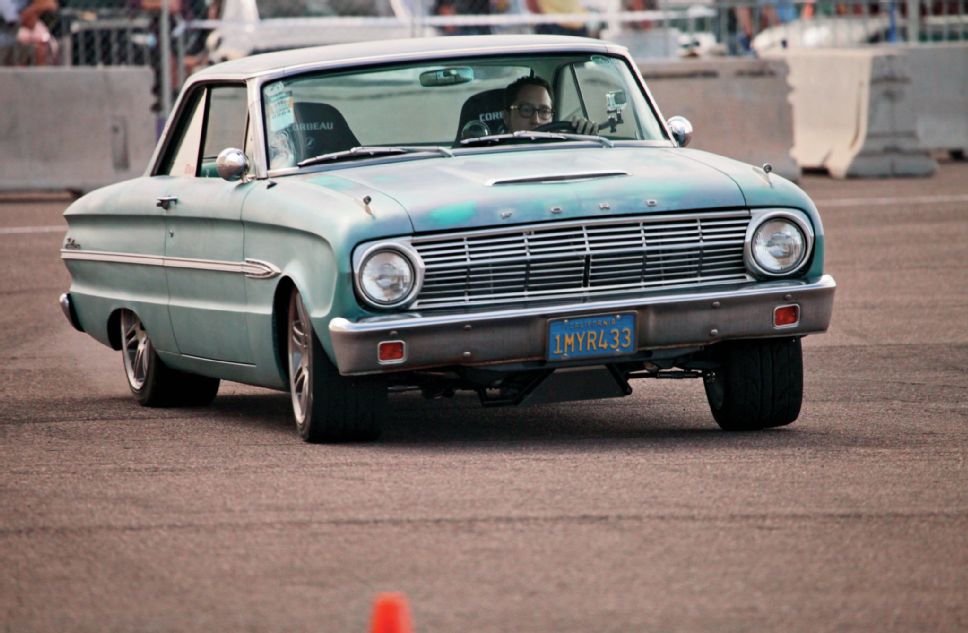 “Pro Touring Tuesdays” is all about bring you guys and gals the best of the Pro Touring builds and videos that we uncover while on our endless search for all things Bangshifty. Some are more traditional than others, but trust me, they’re all 100% BangShift Approved.

Do you remember your first vehicle? Maybe it was a hand-me-down from a family member, or perhaps bought with hard-earned dollars from a high school job? Any idea what happened to it?

Well, if you’re Craig Johnson the answer to that question is a simple one, odds are something along the lines of “In my garage, why?”. 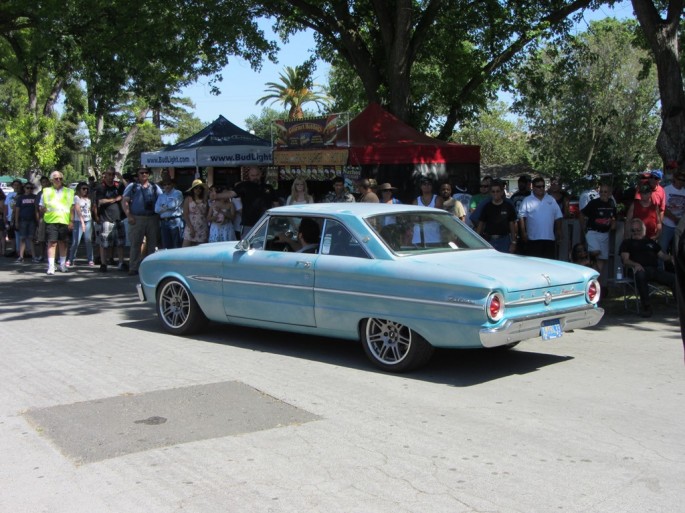 This week’s Pro Touring Tuesdays featured build is Craig’s 1963 Ford Falcon, and this is a car that I think you guys and gals will really dig as it’s a 100% DIY effort on an Everyman’s budget, which if you’re like me is more often “Make due with what you have as the money tree is picked clean at the moment” rather than an actual budget.

When faced with this situation, there are typically two paths travelled:
1. Prolong the build, saving up for those trick suspension and drivetrain goodies so lusted after for an indeterminate amount of time.
2. Figure out how to build them yourself.

The former is almost always the chosen path, which makes the latter all the more interesting.
We’re all clear as to what the preferred BangShifty choice is, right? (Hint: It’s not the first one)

In all fairness the second path was all but mandatory as from what I understand there’s a relative lack of aftermarket support for the Ford Falcon, meaning that by necessity you have to expect some custom fabrication to meet your end goals.

Being a mechanical engineer by trade, Craig has access to some big boy toys (Both on the hardware and software side) and coworkers who can weld with the best of them, but don’t let that fool you: All of those tools and assistance are for naught if you don’t do the grunt work of getting down and dirty in the garage to measure, mock up, fit, and refit until everything goes together just right.

As an example, the next few photos show Craig’s fitting of RX7 brakes to his Falcon, starting with a CAD drawing, design of the template, and fitment. 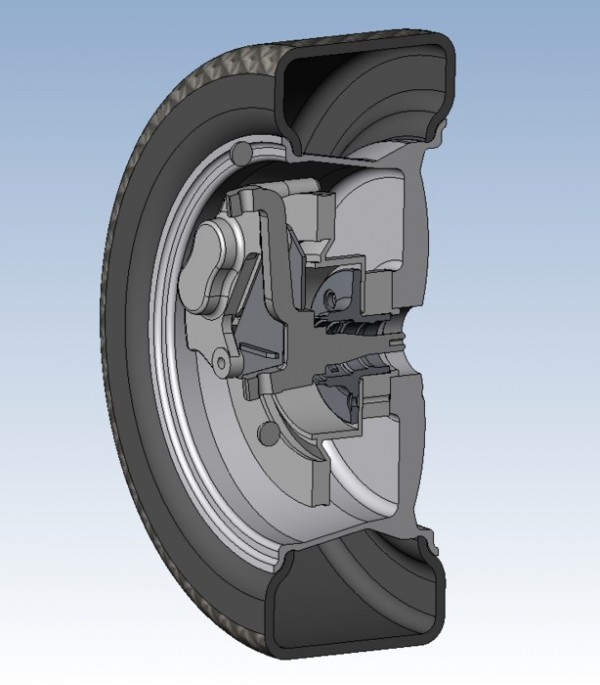 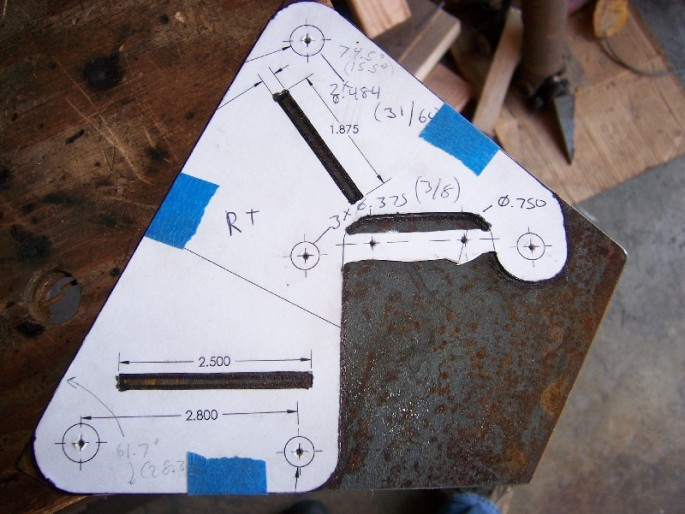 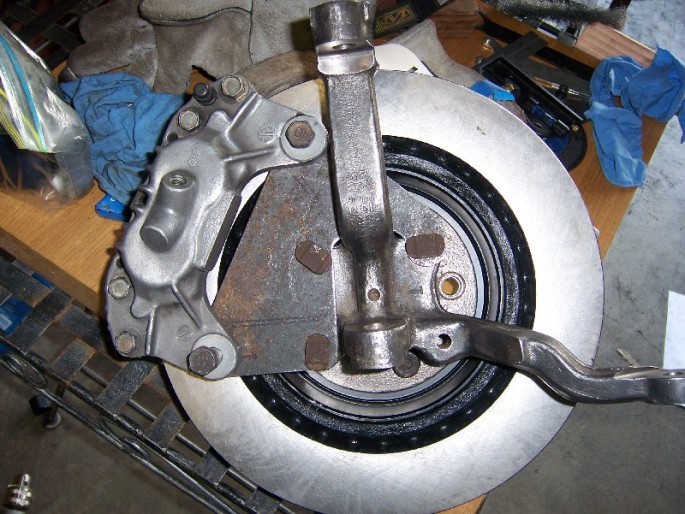 Lest you think he’s a one-trick pony, he also mapped out his desired front end suspension geometry: 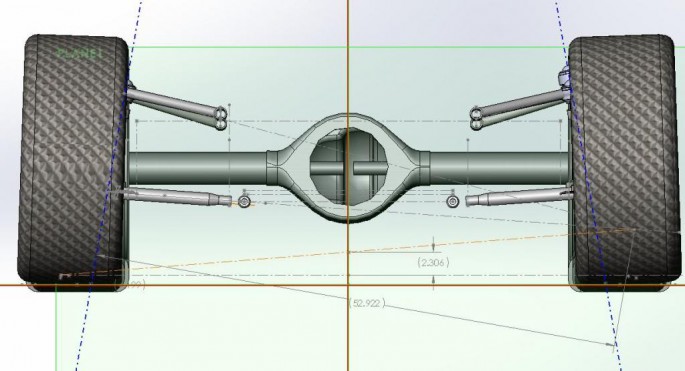 Fabbed up a set of adjustable upper control arms: 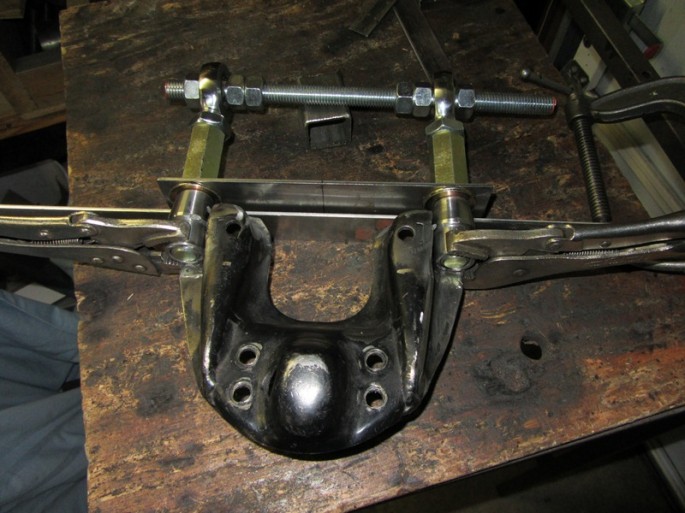 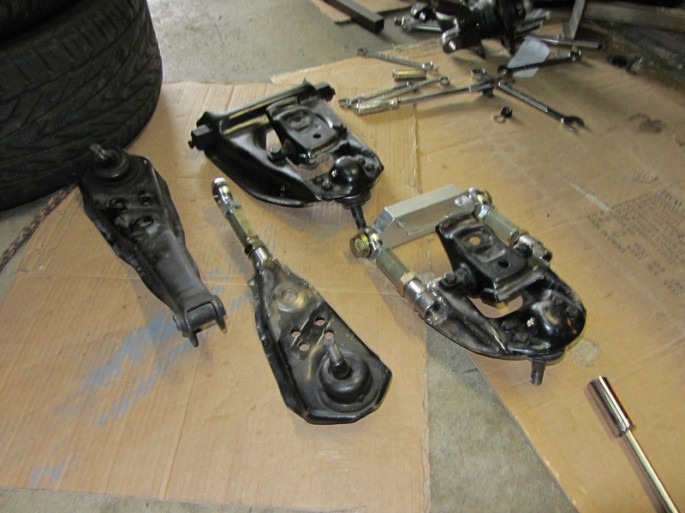 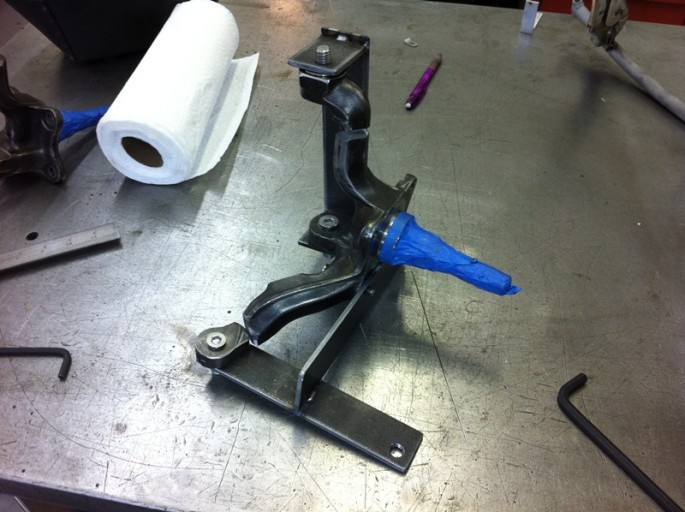 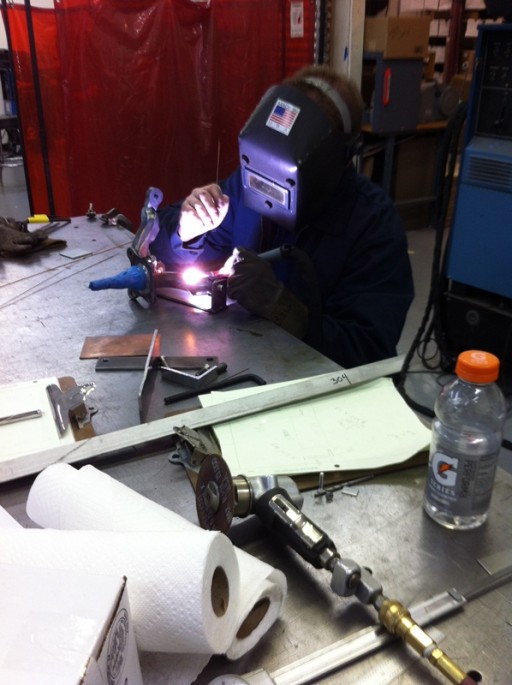 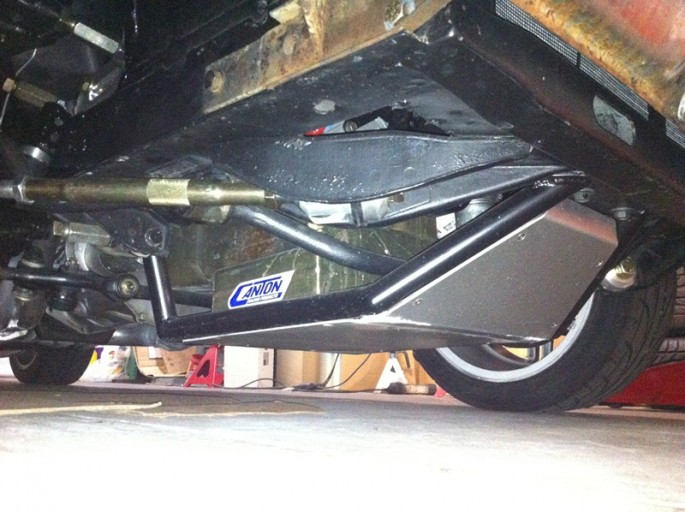 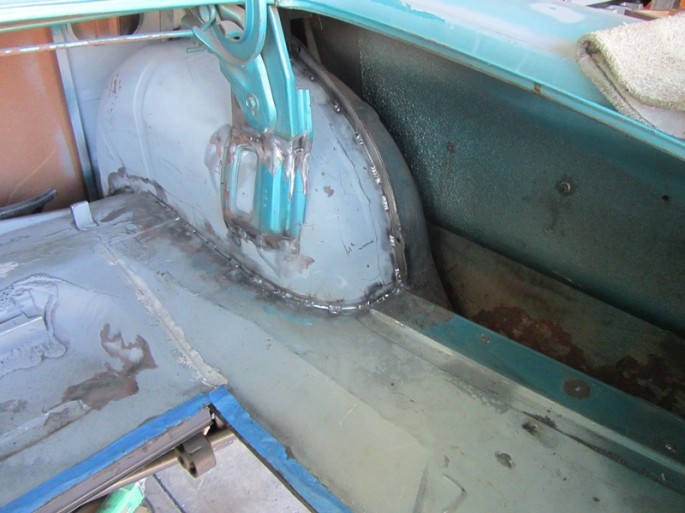 Oh, and he also arches his own leaf springs. You know, just because. 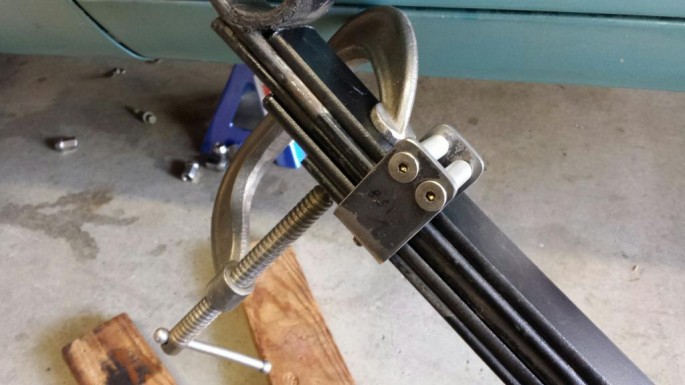 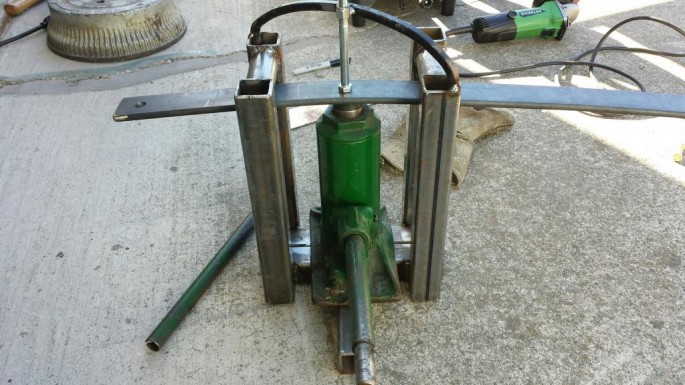 That’s not even close to all of the modifications done to the car, but I have to leave you with something to read within the build thread, right?

Keeping with the theme, the Falcon is powered by a tried and true Foxbody Mustang drivetrain, more specifically a “mild” 5.0, T5, and 8.8 from a 1989 GT. Craig estimates that it puts down 250-275 horsepower, which is more than enough for a car that barely weighs just a tick over 3000 pounds and propelled him to a first place finish at the 2013 Good Guys Pleasanton event in the Street Machine class. 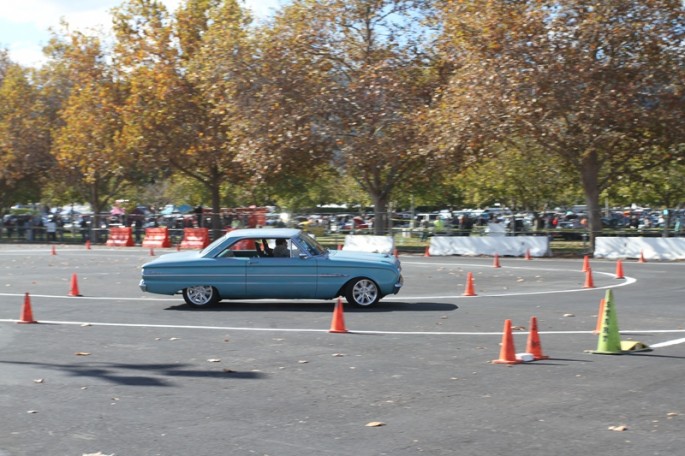 Below is a video of that winning run. You may recognize the shrill whine of the announcer… (Chad, nothing but love!)

The Falcon is currently getting ready for paint, at which point Craig claims that it will be “done”. I’m a little bit bummed as I personally love the patina, but painted or not this car embodies what I personally like to see in a quote-unquote Pro Touring car, namely old iron with just enough modern touches to make it fun to thrash at an autocross, on a road course, and/or on the street. Being 100% home built just brings it one step closer to a perfect build.

CLICK ON THE LINK TO READ THE BUILD IN FULL ON LATERAL-G: 1963 FORD FALCON BUILD THREAD 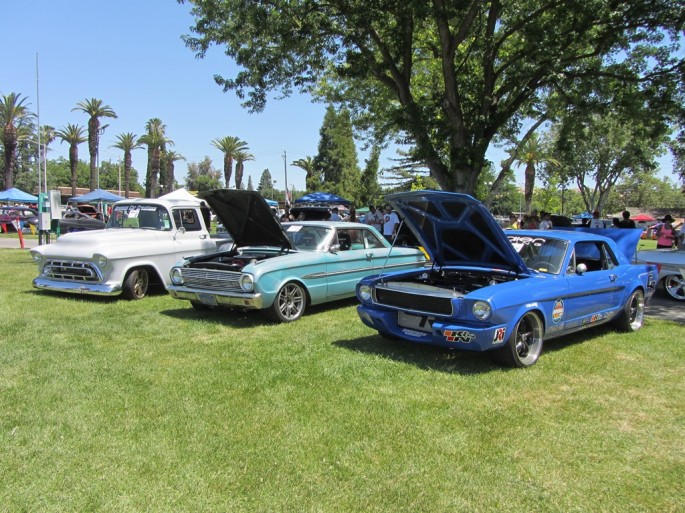