Best Of BS 2017: The Story Of An Audi Quattro’s Destruction At The 2017 Prescott Rally 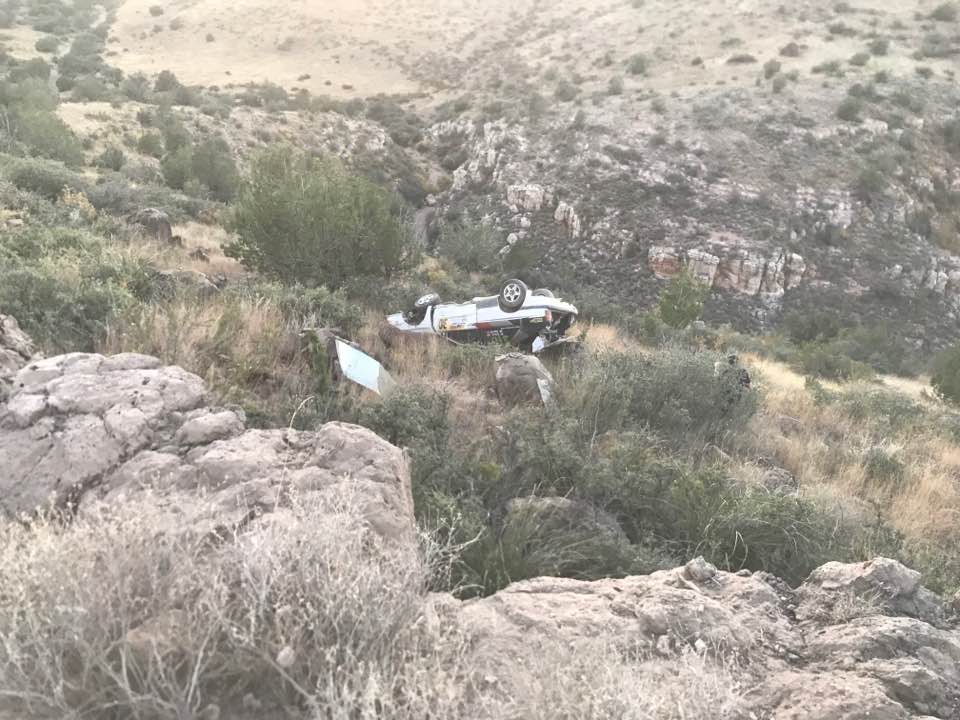 (Since this story was written, Riley and Moose have been piecing together what they need to get back into racing and have, for the most part, healed up from the big off that they had at the Prescott Rally. -Ed.)

Let’s start this story off at the beginning. I’m friends with an interesting little lady named Riley Trout and her husband, Paul. I met them both while I was attending Embry-Riddle in Arizona through the school’s motorsports group. Both like off-roading and rally racing, and have done the west coast LeMons Rallies. Paul is the guy with the Lancia Scorpion, Riley was big into off-road trucks. Or so I thought. Earlier this summer, I learned that she was going to be right-seating in an Audi Quattro ex-Group B car at the 2017 Prescott Rally. Naturally, I had questions…along the lines of, “When were you going to tell me?” and originally wanted to interview Riley about her time in the right seat, but between a busy summer on my end and the work that she was putting in with experienced driver Mustafa “Moose” Samli on the ex-Ron Wood Audi Quattro, those plans never came to fruition, and I didn’t give it much thought again until I saw a post from Samli on October 7th on Facebook. That first photo, along with the caption (“Well, F***.”) was jarring, to put it mildly.

During the 30th annual Prescott Rally in northern Arizona, the Quattro wasn’t running at full potential. A rear main seal was leaking into the bell housing, causing the clutch to slip. This isn’t a parts store fix…finding the rear main seal for a race Quattro’s long-deck four-cylinder isn’t that easy. So when the car would come into services, they would clean up the clutch, and Samli was babying the car through the event, running no harder than 50% of the car’s capability. There was no reason to push any harder, as the Audi was already doing well. Riley was handling her duties reading the notes perfectly, and things were going well enough, minus a group of hunters that had not-so-gently informed recce crews that they were on the first day of hunting and that they were not leaving, prompting some intervention from the Yavapai County Sheriff’s Office. Subsequently, on the last stage the conditions, already dusty, were going to be exacerbated by the setting sun. 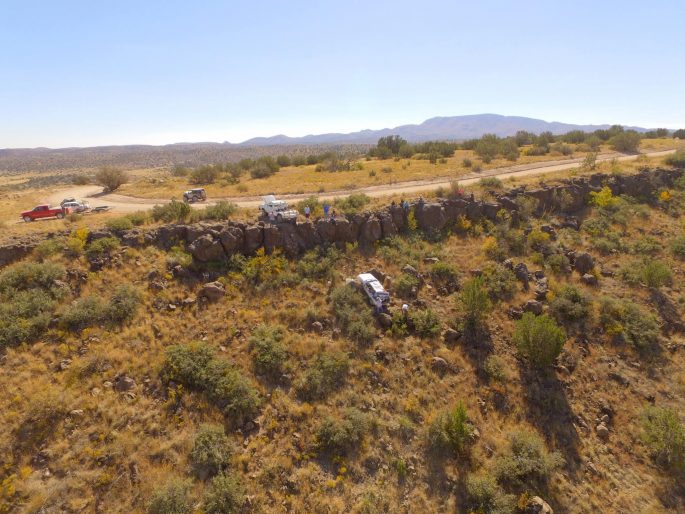 The incident occurred at a triple-apex turn on the final stage. The Quattro had been catching up to a Ford Mustang and was in dusty conditions. The corner is one that Samli has run many times over in his three decades of driving, so he pitched the car into a drift in 3rd gear (about 65-70 MPH) in the right line. With the combination of the dusty conditions and the sunset beaming into their eyes, the racing line was lost, Samli was blind and ultimately the Quattro sailed through the apex, through the air, and went off the course into a boulder field that lay between the course and a sheer drop into a canyon…you know, the kind you would find in a Coyote vs. Roadrunner cartoon. Neither Samli or Trout know for sure how many times the Audi rolled, but it rolled hard…the front suspension was torn from it’s mounts and the cage, a combination of the original 1984 tubework and the upgraded parts that were installed by Sergei Kaigorodov at SubiWorx in Tempe, Arizona that brought the Quattro up to 2017 specifications did their job flawlessly, with no broken welds and only a small deformation. The Quattro came to rest against one of the large granite boulders in the field upside-down and driver’s side low and both doors were pinned shut. The car was leaking race fuel, so Samli cut the power switch and pulled the switch to make sure it couldn’t accidentally be kicked back on. Riley managed to find a 30×30″ section of the windshield that had been knocked free and tunneled out of the car quickly, with Moose only following behind once he had gathered up items and secured the car. From there, the scope of what could have been became quite apparent…had the Audi not stopped in the rocks, it would’ve had a long way down to the bottom of a canyon to fall, and I’d probably be preparing to attend a funeral. 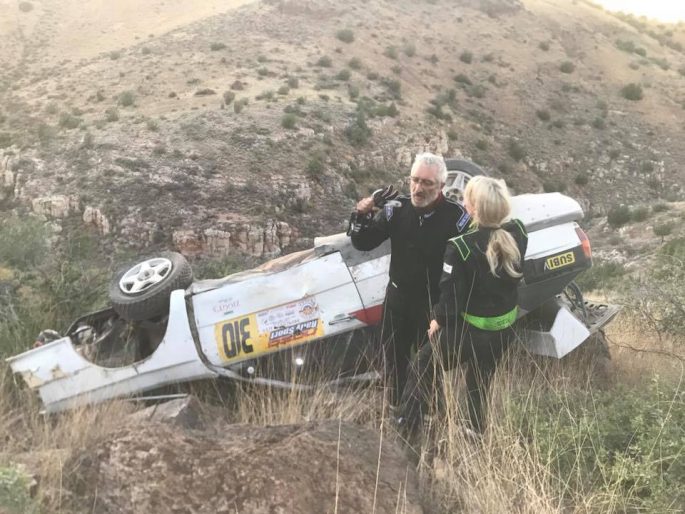 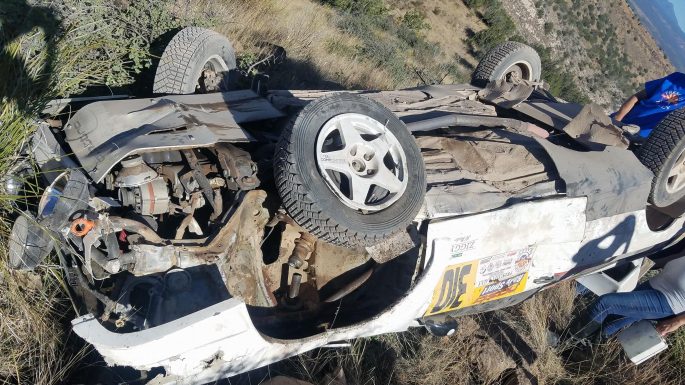 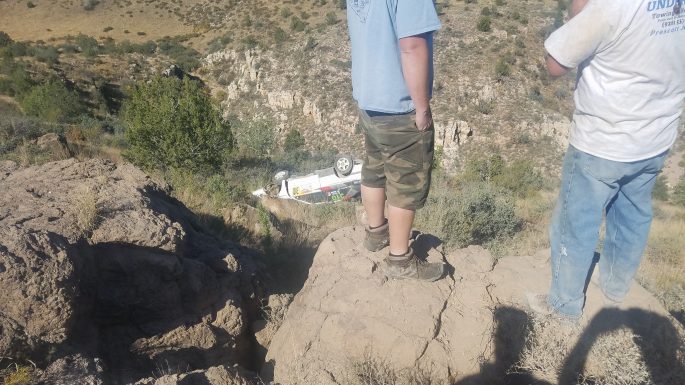 So, what was the damage, besides an utterly destroyed rally legend? Surprisingly, far less than you would’ve expected. Mustafa took the brunt of the damage, breaking three ribs with his own elbow and taking the fire extinguisher to the face after it broke free from it’s mount. Riley got away more or less uninjured, and it was her side of the car that got crushed the worst, with the body deflecting four inches. When the rescue workers got to the scene, it was determined that half a foot laterally in either direction would’ve allowed the Quattro to continue on to the canyon floor. Luck intervened there, but as for survivng the crash itself, all credit for their well-being goes to the cage, the Stilo helmets dated for 2022, the HANS devices, harnesses and every other safety item that Samli insists upon installing into every one of his race cars. 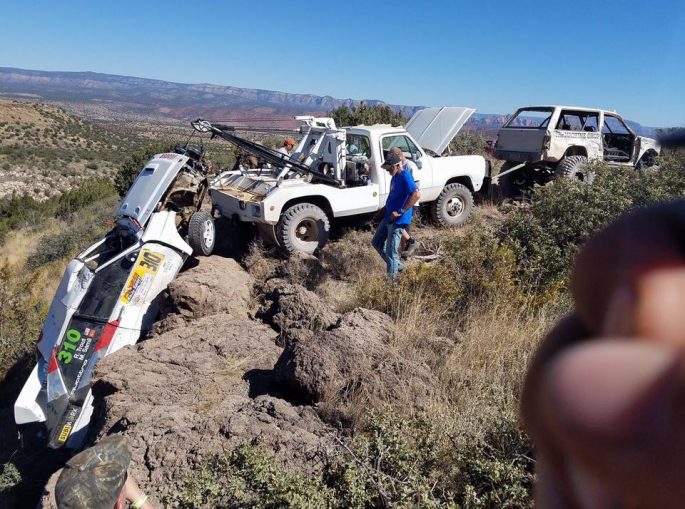 Oddly enough, even after all of this went down, even after Underdog Rescue’s old Dodge wrecker dragged the Audi up the hill back onto the road, and everything else, both Moose and Riley were still in for a second-place trophy for the day prior. According to Moose, instead of his normal long-winded and sarcastic speech, his only words were, “I’m happy to be alive.” The Quattro will return one way or another, with a search ongoing for a new body, and in the meantime Samli has penned up some lessons that were learned as a result of the Audi’s destruction:

“Dave Coleman asked me to share my thoughts on safety etc after our very nasty roll at the last stage of Prescott 2017, so here it goes.

Cage did it’s job 100% even though the car was a mangled mess around the cage, cabin integrity was not compromised, none of the welds cracked. I’d like to thank Ron Wood for building the cage meticulously and Sergei Kaigorodov of Subiworx for doing a great job adding the required bars properly with perfect weld penetration.

Once again the importance of proper seat mounting was proven. Our seats were mounted to bars welded to the cage using steel side mounts, the aluminum mounts would probably sheer off with the forces of the impact. It was a very hard impact.

Belts were brand new OMPs and were mounted to eyelets with 3×3 plates, they were properly adjusted and kept us in place.

Windshield was rubber mounted, not glued. I prefer this to glued on windshields because in case of a roll, they either pop out or they can be kicked out with ease.

Kill switch, I can’t stress enough the importance of a correctly installed kill switch. When we stopped tumbling my initial instinct was to grab the kill switch, soon after we started to smell and hear fuel leaking. Could have been worse. We have a good fuel cell but apparently the vent allowed the fuel to leak once the car came to rest on it’s roof. We will have to figure out a way to remedy that.

Here is the worse;
Never install Lexan windows permanently. Like an idiot I have fastened mine with screws and nuts, lots of them. We landed upside down between two boulders although the windshield popped out, exit through it was blocked. We could not break the Lexan. We remained calm and worked around the problem and created a small exit through the codriver side of the windshield, literally digging through dirt, thank you Riley for the amazing rabbit talent. Next time the Lexan will be mounted with silicone and wire in silicone method.

Never trust the mounts and clamps that come with fire extinguishers that are not motorsports specific. For the second time in two separate rollovers, I got whacked in the face with the fire extinguisher and lost teeth. I’m amazed how the extinguisher found a way through the Stilo helmet. Lesson learned.

A good quality removable steering boss is a great thing when you are trying to get out of a car that is upside down. I don’t recommend the cheap one that has the pin, get the good stuff.

I had a few private messages from other competitors about allowing that stage to run directly into the setting sun in extremely dusty conditions. Even the 3 minuets interval wasn’t enough, we were the third car that had issues there. During recovery, Jon Rood and I shared a few ideas and thoughts about what can be done in the future.

I believe, that corner needs rails and bales.

That’s all, I hope this info can help people run safer cars, I’m here to answer any questions.” 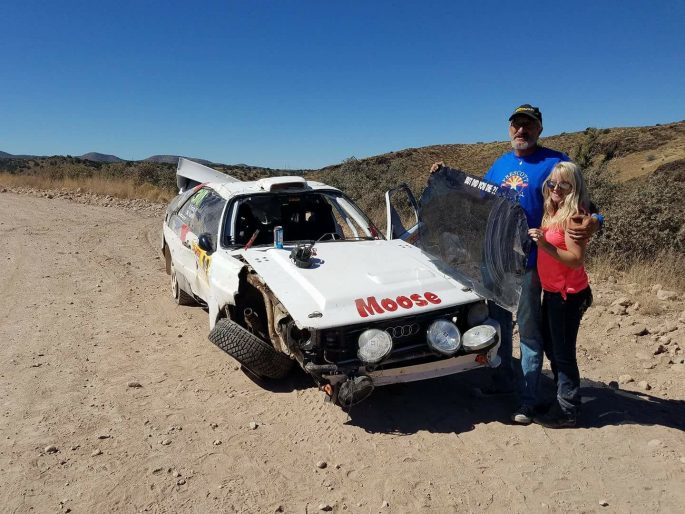 Watch A Rally Driver's Small Mistake Turn Instantly Into One Of The More Wild Wrecks We Have Seen This Year Best of 2017: EKanoo Racing Lexus Resets All-Time Doorslammer Record With 5.44 (Quarter Mile) Blast!