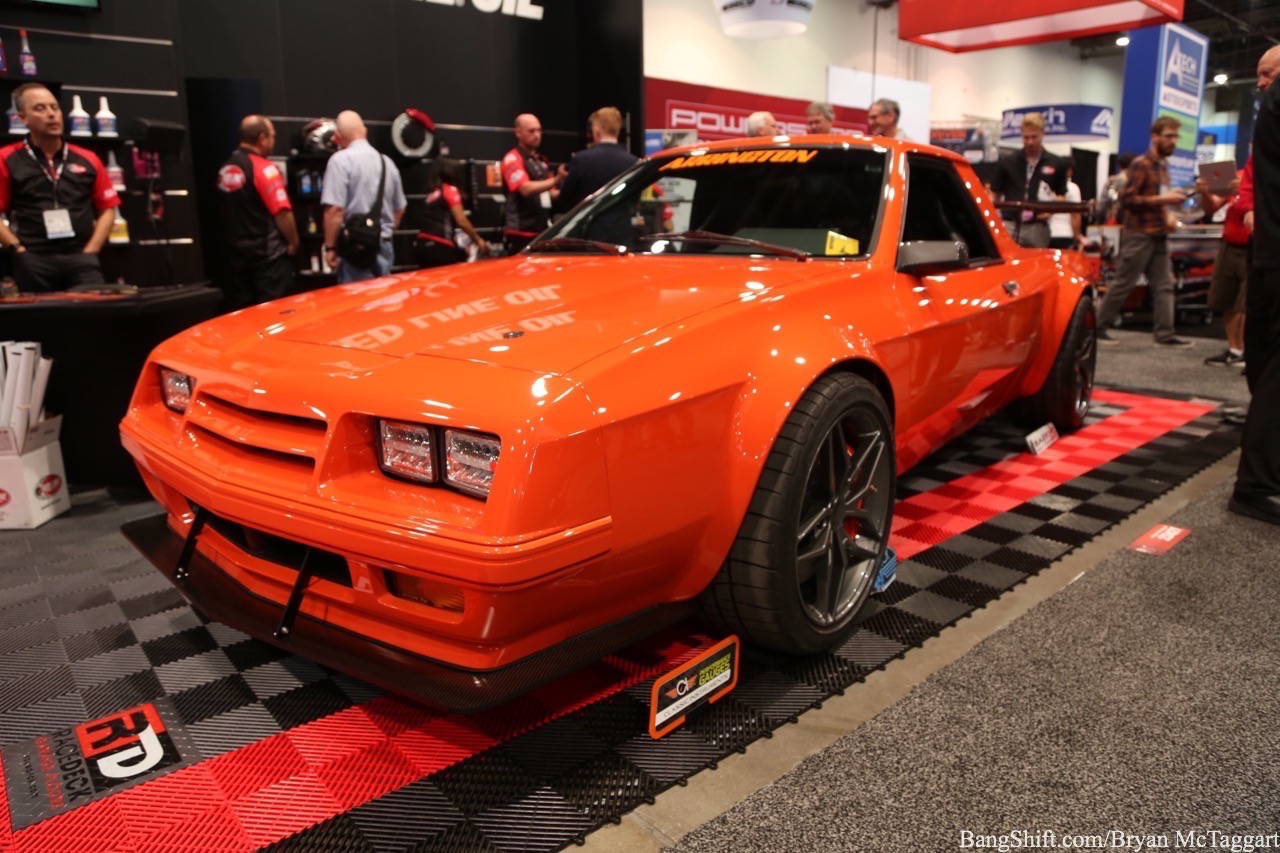 Apparently my tastes in cars are more well-known than I initially suspected. Within five minutes of getting my press badge and starting off my SEMA 2019 experience, I was pulled to the side. “Have you seen Mike Copeland’s build yet?” Not yet, no, I just got here. But within minutes, several people…not just one, several…suggested that I high-tail it to the Redline Oil booth to check out Copeland’s new toy. All I was told: he built a Dodge Rampage.

In case you’ve obliterated any memory of the early 1980s out of your head, let’s do a quick refresher so you can grasp the concept of what you will see that much better. Knowing that Chrysler was in deep, deep doo-doo in the mid-1970s, the company made a quick move and after some changes under the skin from the original Simca-designed version that European buyers loved, brought the Omni/Horizon twins to market. They were a badly needed success story for Chrysler. In 1979, the body shell that would wind up becoming the Dodge Charger/Plymouth Turismo hit the market, and in 1982 the Dodge Rampage/Plymouth Scamp appeared as a lengthened ute that was Charger/Turismo from the doors forward. All front-drivers, all four-bangers. Got it? Okay…look now. 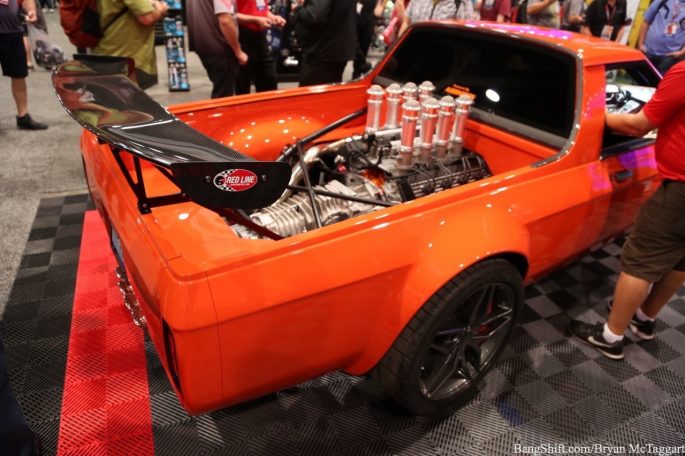 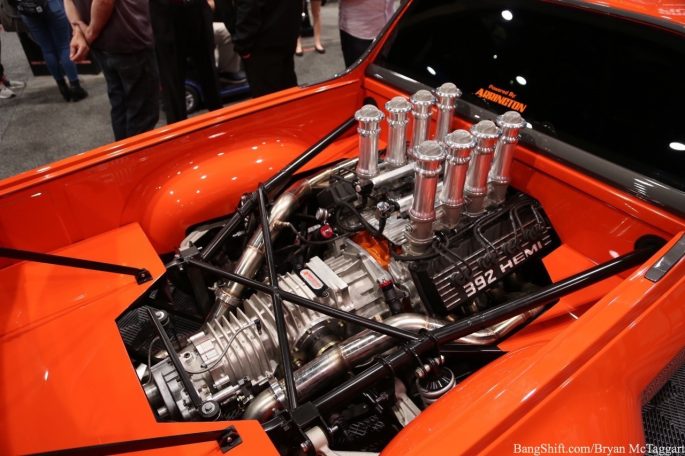 The words, “What the hell did you do?!” might have come flying out of my mouth. But look at this thing! Copeland didn’t just dive off of the deep end, he did it while holding sparklers and screaming “The Star-Spangled Banner” at the top of his lungs! So let’s get down to it: the original machine was a 1984 Rampage, the last year of the breed. The little trucklet was gutted out, and a Factory Five GTM chassis that was cut in half, narrowed seven inches and lengthened four inches to fit was crammed in instead. The engine is an Arrington-built 392 Hemi that has CNC ported heads, cam, forged Wiseco pistons and Manley connecting rods, and all sorts of goodies that have kicked power up to somewhere around the 650-horsepower range. The Hemi barks out through Borla stacked injection that is controlled by a Holley Dominator system. Aeromotive supports the fuel system and Flex-a-lite handles cooling duties. Kooks handles the exhaust duties by way of up-and-forward turbo headers for an LS that have been modified to work with the Hemi and a three-inch stainless steel exhaust with Mopar tips. 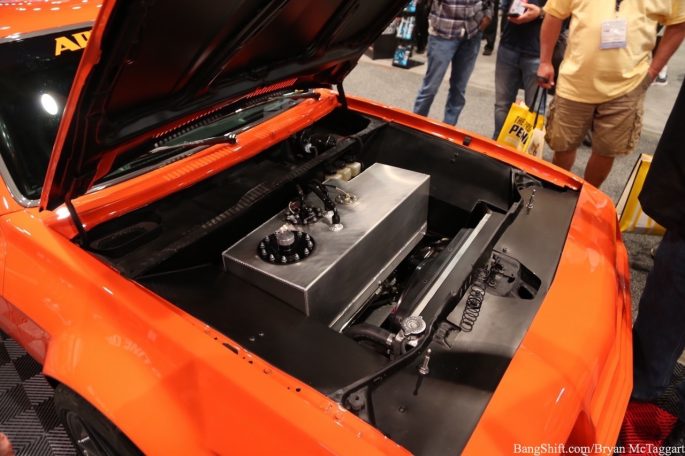 Backing the Hemi is a Mendiola transaxle and a clutch setup by Centerforce that uses an ATI adapter. Since there was no 3G Hemi setup for the Mendiola, Centerforce worked their magic and delivered. The gears in the transaxle are Copeland’s custom mix. The ring gear is a 4.10 unit, 4th and 5th gears are overdriven, and at 1:1 the drive ratio works out to 2.89. Yes, this car will be highway driven. And judging from the other hardware, it’ll be driven more than just on the Interstate. Rolling stock is Forgeline wheels and BF Goodrich Rival tires, 18×10 and 275/35/18 up front, 18×11 and 315/30/18 at the rear. Those steamrollers are hiding Baer XTR six-piston monoblock calipers and 14-inch rotors, with Hawk pads getting the brunt of the brutality. 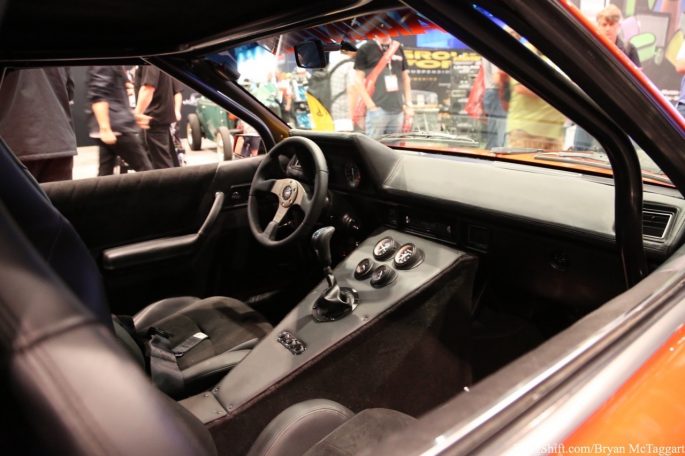 Inside ProCar seats re-covered in leather and suede hold the occupants down while they enjoy a serious Pioneer audio system. The driver will enjoy the Classic Instruments “Future Gauge” setup and the Vintage Air air conditioning system will be welcomed as well. The rear wing and hood pins were sourced from Anderson Composites, and as for the paint, that’s a 2020 Dodge color called “Pumpkin Pearl” that got tricked up with 40% more pearl that normal.

Yeah, this one is certainly in my wheelhouse, all right. 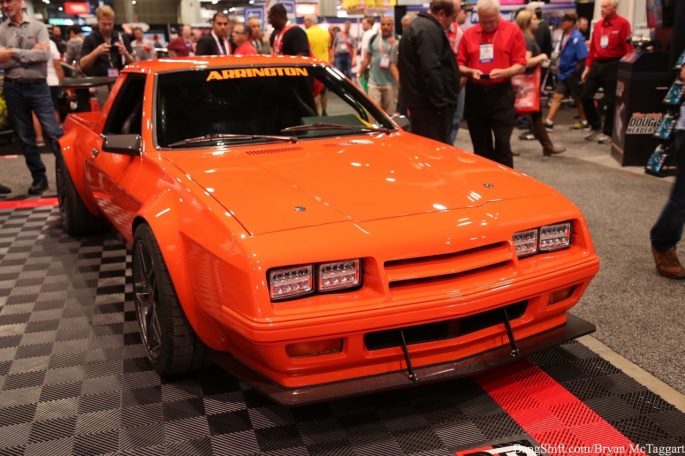