Take A Ride Onboard As This Subaru WRX Tears Around The Philip Island Grand Prix Circuit!

Jul 18, 2016Bryan McTaggartApex Video, BangShift APEXComments Off on Take A Ride Onboard As This Subaru WRX Tears Around The Philip Island Grand Prix Circuit! 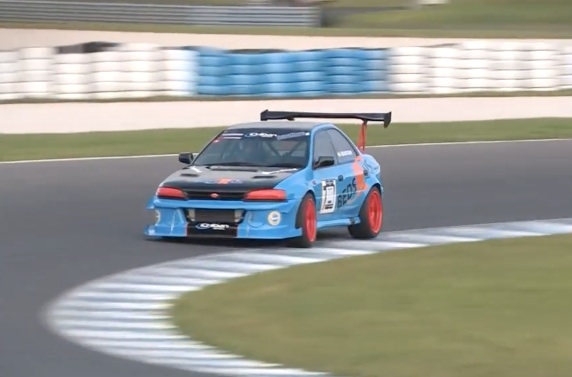 Many people blame the video game Gran Turismo for influencing what a lot of people deride as “rice car culture” to America. They’re right, but they are so wrong in their reasoning. What Gran Turismo did was introduce people to cars that were not available in the North American market that were worthy contenders…it didn’t influence teenagers to mix Mopar High-Impact colors with Honda Civics and neon kits. Without question, the first car I picked when I first fired up the game was the 1967 427 Corvette…but after the first race I was wondering what in the hell a Subaru Impreza WRX was and how it managed to completely and utterly demolish me at Grand Valley Speedway. Since then, I’ve grown a healthy respect for hot Subarus, Nissans and Mitsubishis…the right cars, like Evolutions, 3000GTs, Skylines, and so on. And Subarus, in particular, have my attention for antics like this car. This is a 1994 WRX owned by Phil Bunter. It’s making 480 horsepower at the wheels and will rip around corners like a touring car. Running the Philip Island Grand Prix circuit, this little howler of a Subaru looks surgical in it’s cornering, and while Bunter is doing the wheel work, a lot of the WRX’s composure comes from it’s setup. If this doesn’t make you want to rip around an apex, nothing does.

The WORLD of SCORE videos have some sage, common-sense registration advice for all racers We don't always notice a Rolls Royce, but when we do, it's laying waste to its tires at Goodwood