Total Insanity: Watch These Motorcycle Racers Get Air Running Flat Out In the Rain 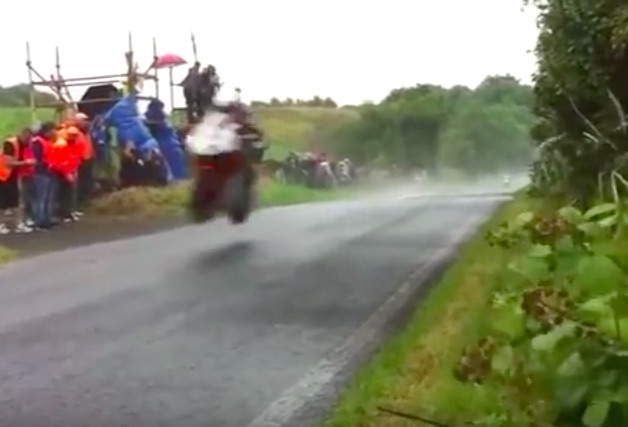 There’s a class of human being known as “racer” and these people are cut from cloth that most of us aren’t. At least I know I’m not because to be a “racer” means to be willing to do what the people in this video are doing. Running your stuff flat out in crummy conditions and launching into the air at speeds that have to be over 150 mph. The fun thing in my mind is that I would not get mangled on the jump, I’d have been mangled three miles back on the first or second turn of course! I love having fun with cars. I love sliding them around, goofing off, and going fast but I have long resigned myself to the fact that I am not a racer. I don’t have the skill or guts to do what these people do, especially the motorcycle guys.

Lots of people want to be racers and lots of people try but the reality is that real talent and ability always shine in motorsports. Yes, money is a big deal and without it you are sunk but look at the people who have achieved to the highest levels in all forms of racing. They are exceptionally talented and gutsy people. Del Worsham who won the NHRA funny car title a few years back is a guy who cut his teeth running down cow path tracks at speeds angels feared to move at. That is just one example.

The people on these motorcycles are racers, pure and simple. What they are doing here made us pucker up hardcore but for them it is just another day at the office. Where we’d be screaming like a nine year old girl at a Wes Craven movie, these guys are smiling and likely loose as a goose. I rode with Ken Block this year, I know what a racer looks like at speed and it sure as hell was not me!

Some Kind Of Mess! Watch A Can-Am Car Spin Off Track And Then Cause Wreckage Trying To Get Back On Kyle Loftis Goes Big And Runs Over 200 mph In His New Favorite Street Car!

One thought on “Total Insanity: Watch These Motorcycle Racers Get Air Running Flat Out In the Rain”