Awesome: Watch The VW ID.R and The McLaren F1 Runs Up Goodwood Side By Side 20 Years Apart

Jul 10, 2019Brian LohnesApex Video, BangShift APEX, HISTORIC, RACING & ACTION, VideosComments Off on Awesome: Watch The VW ID.R and The McLaren F1 Runs Up Goodwood Side By Side 20 Years Apart 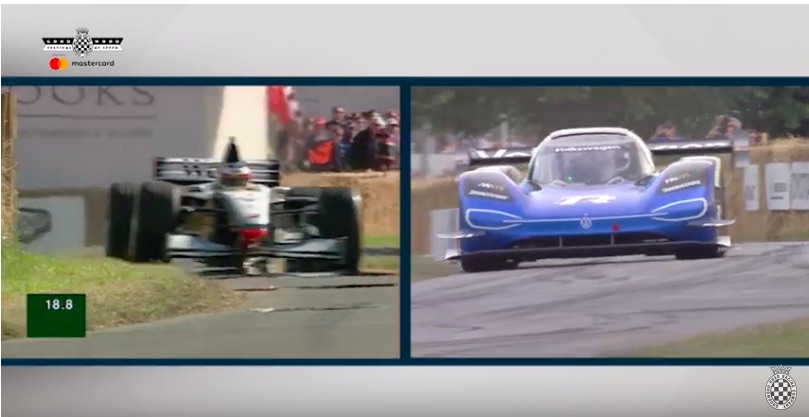 Automotive technology advances. From window cranks to propulsion systems, things are constantly being touched, tweaked, and changed by engineers. The rise of the electric car has been accelerating in many interesting ways. With companies like Jaguar now offering full EV SUVs and every other company on Earth seemingly finishing up the details on their own electrified models, we’ll be seeing loads more of them on the roads soon. But what about performance? Well a few weeks ago we showed you the VW ID.R tearing around the Nurburgring at a blistering pace and that was a multiple mile course. On a short court the thing is even more monstrous as the world learned at Goodwood.

For 20 years the record run up the hill at Goodwood was held by a McLaren F1 car driven by Nick Heidfeld and in one fell swoop, driver Romain Dumas knocked it right off the charts by making the first sub-40 second run in the history of the event and grabbing the ultimate title in the process.

This all sounds well and good but what does it look like? That’s the beauty of this video. The side by side comparison of both runs gives you an idea of where the electric VW was faster than the F1 car and where the major differences lie between the two in terms of their ability to handle, brake, and accelerate.