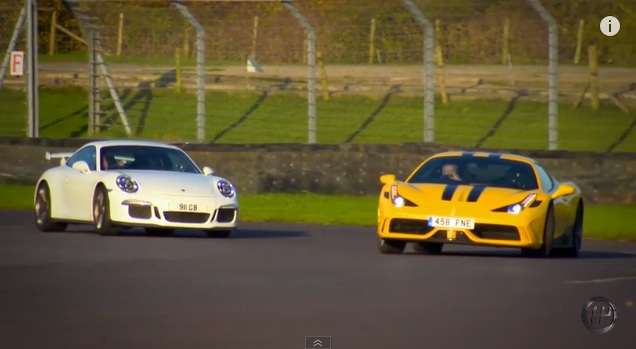 Fifth Gear, that other British car show, doesn’t do much for me. Neither do the Porsche 911 GT3 or the Ferrari 458 Speciale. Fifth Gear has always felt like a spinoff show, and the Porsche and Ferrari are, in my eyes, the playthings of the rich and skill-less, more often than not used for posing and showcasing wealth to others in the gated community. However, if the cars are at a track getting the living hell spanked out of them by two talented racing drivers, you have my full and undivided attention, and that’s what I bring to you today: In the Ferrari, you have Fifth Gear’s Tiff Needell. Needell has Formula One, LeMans, and British Touring Car Championship racing in his background in addition to his time as host and driver for Fifth Gear and the pre-2002 Top Gear. In the Porsche you have admitted Porschephile Chris Harris. Harris has his own racing background, plus work for /drive and Chris Harris On Cars, and we’ve seen his antics before.

Cutting two talented Brits loose with a hot-blooded Italian and a German with serious anger issues…only good can come out of this. But which one takes the win in a two-lap blast, the screaming Italia or the technologically-advanced 911? Click play below to find out!

Lessons On Preparing Your Rear End And Gratuitous Van Burnouts, Courtesy Of Hot Rod Garage! 2,300 Miles! We Take A Roadtrip To Colorado And Back With The Angry Grandpa Chrysler!