Watch A Cool, Circle Track Themed Rat Rod Eat The Wall During The Spectator Drags At A Maine Speedway As Peter Griffin Announces 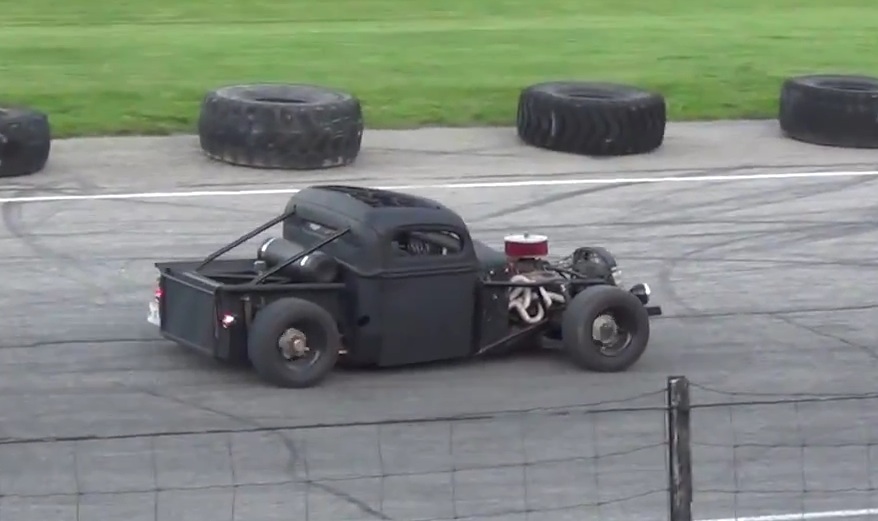 Filmed at Beech Ridge Speedway in Scarborough, Maine the video you are about to see will both make you wince because of the wall banging nature but it will also make you smile because of the actions of the driver who did not crash, and it will make you laugh because of the hilariously over the top accent that the announcer has on the PA.

When I am on the road announcing races, I tend to bury my accent to some degree. I am certainly not ashamed about what I sound like but when you are in Kansas you’re either going to be the guy who gets remembered for doing a good job or the guy who is incapable of ending a word in “ER”. I prefer not to be seen as a sideshow in that respect, but when I am home? All bets are off then because I am among people who speak the same way. It is “dragstas” and “funny cahs” all weekend long. As soon as you hear the guy on this video scream, “He missed a GEEEAAH” you’ll know what I mean.

The cars involved are a little Nissan 240 SX and a pretty bitchin’ Ford truck cab based rat rod. The rat has a small block in it, wide five style wheels with big wide tires, a super low slung stance, no fenders, and a full cage. Think of it as a kind of Maine version of the RideTech ’33. In reality, the old truck looks setup for exactly what it is about to do on the 1/3 mile oval at Beech Ridge. After leaping out to a sizable lead right out of the blocks, the truck looks primed for victory until the driver loses the handle and eats the wall pretty flipping hard. Seeing what happened, the dude in the Nissan spins his car around a zips back to check on the dude. Pretty class act if you ask us!

If you have a local circle track and you are attending a race where spectator drags are a part of the program, keep you head and your camera up. There’s GOLD in them thar hills!

Thanks to Matt Dimick for the tip on this video!

PRESS PLAY BELOW TO SEE A SWEET RAT ROD, SOME GOOD SPORTSMANSHIP, AND IT IS ALL DESCRIBED BY THE MOST MAINE SOUNDING ANNOUNCER IN HISTORY –

Watch Monster Mania: This Is A Fun Look At The Monster Truck World In 1986! Classic Ads From the Pages of Motor Trend Circa 1969