Best Of 2014: Watch The Craziest Motorcycle Crash Footage We Have Ever Seen – Flying Bike Takes Out The Guy Filming!

Dec 26, 2014Brian LohnesApex Video, BangShift APEXComments Off on Best Of 2014: Watch The Craziest Motorcycle Crash Footage We Have Ever Seen – Flying Bike Takes Out The Guy Filming! 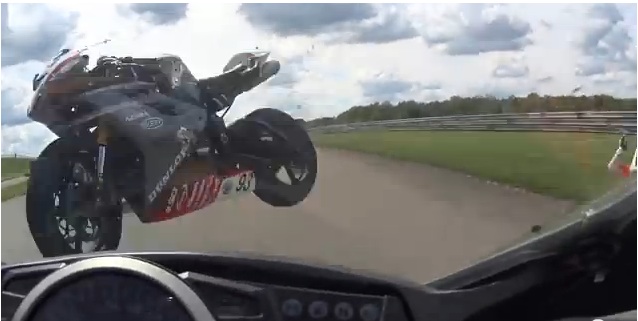 Motorcycle racing is full of inherent risks like every form of motorsports, but even we didn’t really plan on seeing this one come to fruition. Through a wild chain of events that take place over the span of just a few seconds, the rider filming this video gets wiped off the track by a flying, tumbling, unguided missile of a riderless motorcycle that he had no chance to avoid. Perhaps even more amazing than the footage itself is the fact that the rider was virtually unscathed. How do we know? Because he posted the video and he posted it with this comment:

Beaverun 5-24-14 wreck. I am fine, walked away a little dizzy, confused, bumped and bruised. Oh and pretty angry.

The whole mess began when a rider just ahead of the guy filming decided to swing his bike across the track while accelerating and in doing so, clipped the rear tire of a bike it looked like he was trying to pass. Once the tires touched, all hell broke loose and the rider went down instantly. His bike, rather than rolling off into the grass went into a series of flips, rolls, and endos before literally landing on the guy who took this film.

I often joke about how uncoordinated I am and how I could never be a fast motorcyclist. After seeing this video, I’m pretty much sold on the idea of being a lifetime motorcycle competition spectator. Amazing stuff and we’re sure glad that the rider walked away a little pissed, a little bruised, and a little bit quizzical on what the hell had just happened to him.

Takata Airbag Recall Gets Much, Much Worse...7.8 Million Vehicles Affected Best Of 2014: This Miniature Chevy 350 Sounds Awesome Barking Through A Set Of Tiny Long Tube Headers!