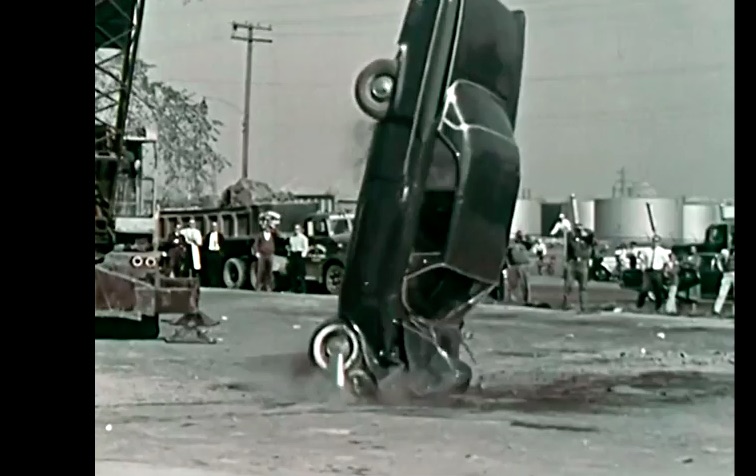 We have to hand it to Jam Handy and General Tire and Rubber for their excellent work on this 1960s tire safety video (read: advertisement). The general theme of the film is that you’re pretty much going to be dead as will your whole family if you buy something other than the revolutionary General “Dual 90” tire that basically doubled the contact patch of the tire to half of nothing from nothing. The overall tone of the whole film is pretty ominous and when you actually pay attention to how teenie-weenie those tires are and the massive vehicles that they are in charge of helping make turn and stop it is a wonder that there weren’t burning overturned cars lining every road in America back then.

The “Dual 90” tire was actually a really successful line for General over the years and it lasted for a couple of decades. The “split” down the middle of the tire is what the company claimed help the tire grip better and add to their traction ability. Did it actually work? Who the hell knows. Even if it did work, those tires were still god awful and even though no one knew it back then, they were. We wish that there were some sort of tire dyno where grip could be measured and all of these old tires could be tested and compared to modern stuff.

So today when you hop into your car, truck, or hot rod, think about the tires that you are rolling on and even the worst junk you can buy today is exponentially better than the top shelf stuff back then. It is weird to think about how much those black rubber circles can actually evolve but they sure have and this video is proof. Then again, after watching this you may be too freaked out to drive!

Historic Video: Watch Steve Evans And Dave McClelland Call The Finals At The 1978 NHRA US Nationals BangShift Question of the Day: What Is Your Biggest Automotive/Gearhead Pet Peeve?