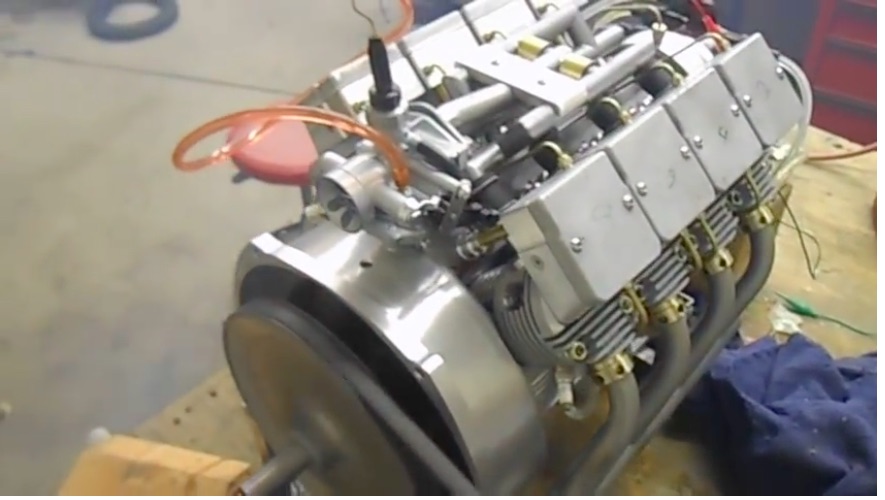 Somehow we have long missed the fact that there’s a guy named Dennis Franz on YouTube who builds amazingly cool and highly BangShift approved stuff. Seriously, this guy cranks out scratch built engines and all kinds of awesome junk and we never knew he existed. That’s why we’re a couple years late on this particular video that shows a 392cc V8 engine that Franz built for a motorcycle project firing up for the first time. He made the whole thing, soup to nuts and from our estimation it looks and sounds freaking awesome.

We’ll show you videos of the finished bike tomorrow but there are some things that we do know about the engine you see here. The camshaft was modeled after a Briggs and Stratton flathead cam. He made that from scratch. We assume he made the crank from scratch, and he used Honda 50cc pistons with apparently one cc of stroke less per hole than they would have had in that factory engine.

The intake manifold is a beautiful thing to check out and honestly every inch of what amounts to a living and breathing metal sculpture is totally bad ass. No, the engine is not going to make 300hp but when you see it in action you’ll appreciate the fact that this thing hustles the old timey looking bike it lives in around with ease.

Nothing like homemade, home engineered stuff to make us smile. Boy does this little guy sound good.

Let's Go Pro Gas Racing At The Las Vegas Speedrome In 1988! More Pre-Strip Fun Ride Along On A USAC Silver Crown Car As It Flies And Slides Around The Fastest Mile Dirt Track In The World