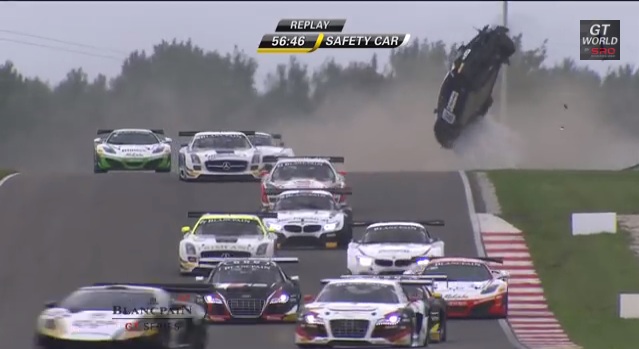 Tomáš Enge was not having a good day at Slovakia Ring Circuit during the  Blancpain GT race in August. From the start of the race he was trying to fight the pack of racers with his Reiter-built Lamborghini Gallardo as they raced towards the first two turns, including a brief stint on the grass. He gathered up the Lambo, but halfway between Turns 1 and 2 he made contact with Stef Dusseldorp’s Mercedes as he tried to avoid an Audi R8 and went into a fast spin towards the barriers. Once the Gallardo strikes the Armco things go from bad to spectacularly bad as the Lamborghini goes airborne as it flips end-over-end, finally coming to land on the barrier itself.

Enge was a little sore afterwards but he walked away from the crash praising Reiter for the strength of the Lamborghini. Reportedly the only thing that was damaged as far as driver safety equipment was a slightly bent seat mount, which speaks volumes about their work after such a wreck.

What's In The Future For Australia's V8 Supercar Series Now That Ford Is Ending Official Involvement Next Year? Random Car Review: The LaForza...It's Part Ford, Part Italian, And More Practical Than A Pantera