Watch Two Modified Drivers Turn A Race Into A Two-Car Demolition Derby-Even The Police Get Involved! 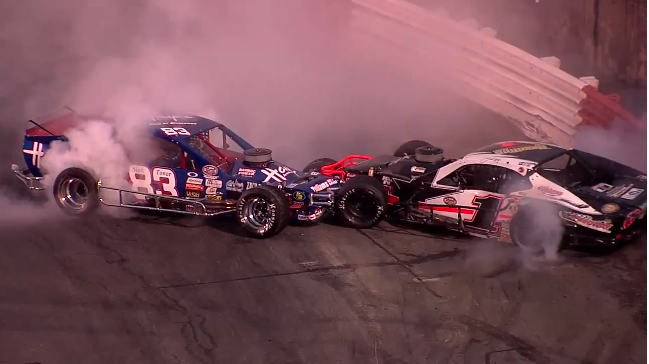 From Bowman-Grey Stadium in Winston-Salem, North Carolina, we bring to you this title fight in the Modifieds division. Tim Brown, in the #83 car, and Burt Myers,in the #1 car have a history of bad blood on the track, and the situation came to a head on July 19th, 2014. Brown, the current points leader coming into the race, was running first place when Myers bumped and spun him out. Brown then sat on the track under caution until Myers drove by, at which point Brown spun Myers out. What ensued was a fast and violent game of tag until officials waived Brown off to the pits. That didn’t last long, as Brown came back onto the track and went for Myers again, which resulted in a car-on-car demo derby. At one point Brown’s car was driving over Myers’ Modified. The battle was ended when track officials and a Winston-Salem police officer broke them up. Both drivers were ejected and disqualified for the race.

Racing is one of the best places to see tempers rise-competition breeds frustration and anger. But more should be done when this level of insanity actually happens, not for both drivers to just be DQ’d and kicked out for the night.

2015 Chevrolet SS Gets Six-Speed Manual And The Good Suspension Bits From Corvette-Now If They Could Just Call It "Impala"! Vintage Video: Watch a 1969 Ford LTD 429 Get Hammered On The Test Course!

18 thoughts on “Watch Two Modified Drivers Turn A Race Into A Two-Car Demolition Derby-Even The Police Get Involved!”