What Happens When You Convert A Subaru Impreza To Rear Wheel Drive And Toss In A Killer Boxer? Drift Car!

Jan 30, 2016Bryan McTaggartApex Sideways, Apex Video, BangShift APEXComments Off on What Happens When You Convert A Subaru Impreza To Rear Wheel Drive And Toss In A Killer Boxer? Drift Car! 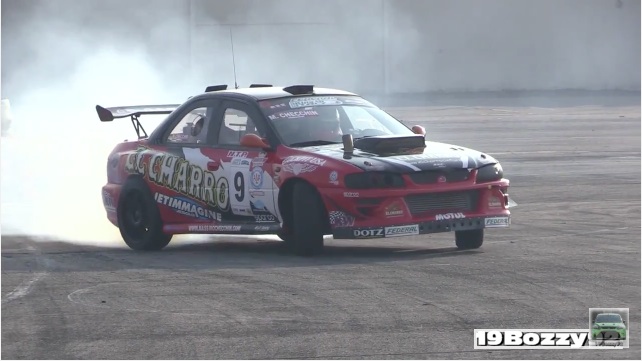 Subaru Imprezas that have had the screws turned in the right direction are nothing short of a riot. They launch with ease, corner like a cheetah that sees you as dinner, and don’t sound like a herd of Africanized Killer Bees everywhere they go. And compared to what Subaru has been known to sell, they looked fairly composed and conservative…a little funky, maybe, but if you look back to the BRAT and the XT coupe, they were positively pedestrian. Unless you heard the burble of a pissed off flat four and a turbocharger just waiting to spool up…then you should be very, very concerned.

Subaru’s selling point for most of their time in the U.S. was their all-wheel-drive system, but you don’t always want all-wheel-drive. Case in point: drifting! This Impreza is set up for the sideways action and has the psychotic anti-lag system on it, which keeps the turbo spooled up regardless of what happens but sounds like a machine gun firing off while it works. Seeing a Subaru sideways isn’t out of the realm, but on tarmac, and without all four wheels blazing, is a sight to behold!