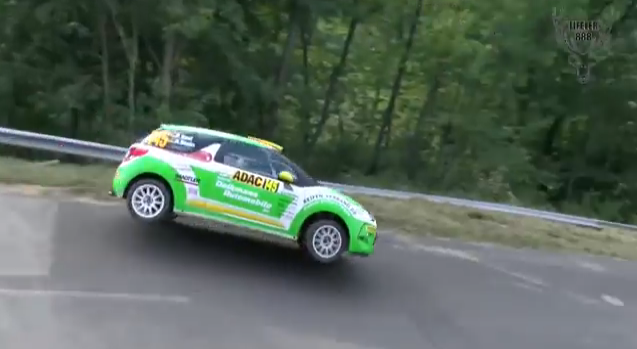 The Green Hell that is the Nurburgring Nordschliefe is a dangerous track, as we’ve shown numerous times before. And from the early days of racing up until today, it is a track that even pro drivers must be cautious on, as it does not discriminate on who looks like a hero and who wads up their car…everybody runs the risk of smacking the barrier on that track. Odd…that sounds just like another favorite accident-prone activity of ours…rally racing! Over the hills and through the woods at speeds that will have your passengers screaming, “Oh, Scheiße” while grabbing onto whatever handle is within reach, rally is great if you want to see cars do acrobatics and gymnastics far beyond their normal capabilities. Somewhere, a very enterprising German scratched his chin and thought, “You know what would be a great idea?” and the next thing you know, the Nürburgring Nordschleife Touristenfahrten Rallye (roughly, the “tourist trips” rally) came to be. The world’s most imposing race course combined with the world’s most psychotic automotive event ever? Hmm…we need to get involved next year.

The action is just as you’d expect: Lots of panicking drivers, screeching tires, and the sounds of cars thumping off of the barriers. It’s violent, and it’s glorious.